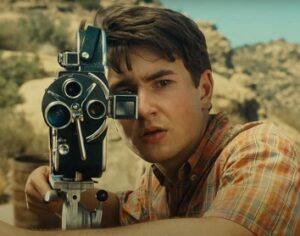 In 1952, Burt and Mitzi Fabelman take their young son Sammy to his first cinematic experience – Cecil B. DeMille’s Oscar-winner “The Greatest Show on Earth.”  Fascinated by the train crash scene, Sammy is gifted his own Lionel train set that year for Hannukah – but his desire is to make the train crash.  Burt temporarilty suspends Sammy’s playtime with the train set, but Mitzi offers Sammy a compromise.  He can crash the train just once – and he can film it with his father’s camera, so that he’ll be able to watch it forever.  When the train stops working, Mitzi asks her son what he did to the train.  Sammy explains he had to crash the train four times to get all the reaction shots.

And just like that, young Sammy Fabelman (alter ego of director Steven Spielberg) first shows not only his love of film, but his understanding of its production.  Spielberg’s “The Fabelmans” is a coming-of-age story about his own family and his own development of his interest in film.  That parts of “The Fabelmans” are overly sentimental is to be expected of a Spielberg offering; that this is his best, most accomplished, and most hard-hitting film since 2000’s “A.I.” is not.  This film is a treasure – and not just for those with a love of film.  But oh, what a treat it is for those interested in the making of motion pictures.

Fast-forward to 1957.  Now living in Phoenix (and owner of his own camera), young Sammy produces a short Western, using his playmates as actors.  When asked how he made the toy guns appear to be firing real bullets, Sammy reports that he pin-pricked the film where he wanted to show bullet shots.  The light shining through the back of the projector then gives the impression of actual gunfire.

When working on his photography merit badge (and yes, Spielberg was an Eagle Scout), Sammy films a short WWII film, using his fellow scouts as actors.  Here, we see Sammy mount a camera to his youngest sister’s baby carriage, to accomplish a tracking shot.  In one of “The Fabelmans‘” funniest scenes, Sammy explains to the boy playing the general that he needs a look of distress, as all his men have been killed in battle.  The boy responds, “Y’mean, I hafta actually, like, act?”

As Sammy’s grasp of filmmaking improves by leaps and bounds, his parents are always supportive, but consider it nothing more than a hobby.  His dad Burt, an early developer of computer technology with RCA, General Electric, and later IBM, encourages Sammy to get an education and give up his interest in film.  While Burt obviously imparts his technical knowledge upon Sammy, Mitzi is the creative one.  An accomplished pianist and dancer, Sammy’s creative side comes from his mother. 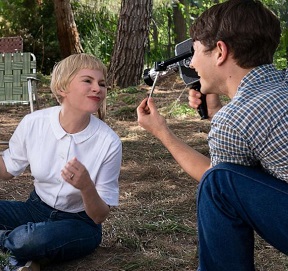 As Sammy, young Canadian actor Gabriel LaBelle carries “The Fabelmans” in one of the best performances ever by a teenager.  Paul Dano as Burt, and Michelle Williams as Mitzi, are also strong in their roles.  Seth Rogan plays the Fabelman family’s best friend Benny, who works with Burt at RCA and later in Phoenix at GE.  In a small but important role, veteran actor Judd Hirsch plays visiting uncle Boris, who used to work in Hollywood, and who gives Sammy some direction toward accomplishing his dream of a career in film.

The original screenplay, written by Spielberg and Tony Kushner, occasionally falls into the Spielbergian trap of over-sentimentality – such as when Mitzi tells Sammy to follow his dream.  Ironically, she says this under the guise of divorcing Burt.  She’s “following her dream” to a life with another man.  As the Fabelman family becomes increasingly disfunctional, “The Fabelmans” borders on unbelievability.  But we must always remember that Spielberg based the screenplay on his own life – so we viewers are prone to give him the required leeway of acceptance.

As “The Fabelmans” progresses, the Mitzi character becomes mentally unstable, and Williams does an excellent job of walking the fine line between a woman rooted in reality versus a complete nut job.  It’s a difficult performance, but one which should earn her an Oscar nomination.  Dano’s character is more subdued, but his Burt never fails to show love for his wife and children, albeit in his own left-brain manner.

In the early ‘60s, Sammy is in high school.  And Burt moves them again – this time to Northern California, when he accepts an important, career-advancing position with IBM.  Here, Sammy faces anti-semitism from some of his new classmates – and falls for a very religious Christian girl.  “The Fabelmans” is never dull, and the parallel narratives of the breakup of Sammy’s family and the development of his film “hobby” are nicely intertwined throughout.

Excellent, even for Spielberg

This ranks as one of the year’s very best films – and may even earn Spielberg another Best Picture Oscar next spring.  And as if the first 2.5 hours aren’t wonderful enough, the final scene is this film’s best.  Now on the doorstep of his first Hollywood job, with CBS no less, Sammy is lucky enough to garner a five-minute one-on-one with famed director John Ford – who proffers one helpful insight into filmmaking technique.  See if you can identify the man playing Ford.  And the final shot, in which an overly excited Sammy prances through the CBS lot, is fabulous!  Put “The Fabelmans” on your must-see list this holiday season.