Typically when I see a movie, I’ll wait a couple days to mull it around in what passes for my brain before writing my review.  But I saw David Fincher’s Gone Girl a week ago, and I’m still not sure how I want to approach this picture.  It’s everything you’ve heard – a taut thriller, an acting showcase for little-known Rosamund Pike, and a faithful adaptation of Gillian Flynn’s 2012 novel.  But I’m still not sure what it all means, or what I’m supposed to make of it. 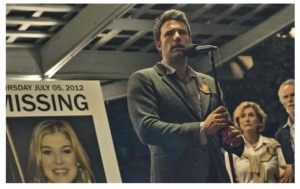 In Gone Girl, Ben Affleck plays Nick Dunne, a part-time writer and saloon owner whose wife, Amy, mysteriously disappears on their fifth wedding anniversary.  What follows begins as a standard police-blotter investigation, but quickly grows into a national sensation, as daytime talk show hosts wax (most ineloquently) about the newly-famous couple.  Was she murdered?  Did he do it?  Did she fake her own death?  And so forth.  For my money, the explosion of this seemingly innocuous case into the public consciousness is the most fascinating aspect to the story.  These stories usually unfold in a shroud of secrecy.  How many times have we seen others describe the missing person as a “loner?”  Not this time.  Nick and Amy appear to be a well-liked couple, recently relocated to Nick’s Missouri hometown.  And once Nick’s plight goes national, there’s simply no stopping the “media train.”

I also liked how the two leads, particularly Amy, are very smart, well-educated characters – not the idiots who typically imbue this type of story.  There have been comparisons of Gone Girl to the 1987 thriller Fatal Attraction, but I liked this one better.  Unlike the Glenn Close character in Fatal Attraction, Rosamund Pike’s character is not only very calculating, but she stays within the reality author Gillian Flynn establishes at the beginning.  Where Glenn Close was required to step outside the reality of her character (which stretched our believability each time “next move” topped her last one), Pike plays Amy as very sober and serious.  Everything she does has been planned to the hilt.  She makes no spur-of-the-moment decisions.  You see, Amy stays home all day.  She has plenty of time on her hands.  She has no children.  She’s very well-read, and she seems to be acting out a role from a book.  Not any particular book, but one she “writes” as the story progresses.  While neither Fatal Attraction nor Gone Girl is truly rooted in reality, Gone Girl is at least faithful to the reality established at the beginning.  Each of Amy’s moves seems real because we believe she is capable of carrying out a complex plot.

Rosamund Pike is excellent as Amy, as she combines just enough of a thrill-seeking desire to counter her stoic façade.  She reminds me of a mousy librarian who might secretly enjoy roller-coasters.  Carrie Coon turns in a fine performance as Nick’s twin sister (and co-saloon-owner), and Kim Dickens’ role as the lead police investigator continues her career as one of the best actresses nobody’s ever heard of.  I especially liked Tyler Perry as a famous attorney who specializes in defending men wrongly accused of killing their wives.  While his character seems to be based on Johnnie Cochrane (of O.J. Simpson trial fame), Perry’s character is, ironically, more believable than Cochrane himself ever was!

As I think about Gone Girl, I find myself making a mental comparison to John Dahl’s exemplary 1994 film noir, The Last Seduction, in which Linda Fiorentino plays an equally smart woman hell-bent on creating a new life for herself, while eliminating any man who makes the mistake of standing in her way.  Gone Girl is not in the same league as The Last Seduction (In fact, let this be a rental idea for you!), but it is the best “mainstream” picture I’ve seen all year.  I’m still not quite sure what it all means, but I respected all the twists and turns of the plot, I admired the acting, and I recommend it to anyone who might want to escape from the real world for 2½ hours.