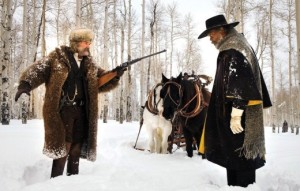 The Hateful Eight continues an unfortunate trend for writer/director Quentin Tarantino. As with Orson Welles, his career peaked early. Tarantino’s 1994 masterpiece Pulp Fiction, his second picture, is still the most important piece of filmmaking of the past quarter-century. But since then, the quality of his work has either (a) been steadily declining, or (b) become so predictable that nothing he does surprises us anymore.

The Hateful Eight is a western, set during a Wyoming blizzard some years after the end of the Civil War. Tarantino regular Samuel L. Jackson turns in the best performance of the film as bounty hunter Marquis Warren, who hitches a stagecoach ride to the fictional town of Red Rock with another bounty hunter, John “The Hangman” Ruth (Kurt Russell) and his captive Daisy Domergue, played by Jennifer Jason Leigh. Eventually the motley crew picks up another cold traveler, Chris Mannix (Walton Goggins, who had a bit part in Tarantino’s last film, 2012’s Django Unchained). Mannix, part of a lost-cause rebel brigade during the war, claims to be the new sheriff of Red Rock.

These four characters seek shelter from the blizzard at a large single-room lodge by the name of Minnie’s Haberdashery. While Minnie herself is nowhere to be found, the lodge is inhabited by four other weary travelers pursuing safe haven – Bob the Mexican (Demian Bichir), Oswaldo Mobray, allegedly the actual hangman of the town of Red Rock (Tim Roth, in the classic Christoph Waltz role), quiet and mysterious cowboy Joe Gage (Michael Madsen, channeling Nick Nolte), and Confederate general Sanford Smithers (Chicago native Bruce Dern, who couldn’t do a Southern accent if you paid him a million dollars). These seven men and one woman are The Hateful Eight – alone together, riding out a blizzard in one large room. They are, for the most part, tough guys – dishonest, ragged, war-weary, and hungry – each capable of spinning believable yarns to hide their true identities and motives. If this sounds like Tarantino’s first film, 1992’s Reservoir Dogs, it is a very similar set-up. Either film could have worked as a stage play.

But while the cast of Reservoir Dogs united in a common pursuit of a major bank heist, these characters share no such goal. And that’s a problem. While the Reservoir Dogs crew was certainly comprised of the underbelly of society, we could at least root for their successful robbery (and thanks to Tarantino’s excellent opening act and character development, we did). But The Hateful Eight contains not one single likeable character to whom we can relate. We find ourselves not applauding for any of them. When the guns start discharging during the final act, we could care less who lives and who survives. When I first heard Tarantino’s next outing was to be called The Hateful Eight, I envisioned something along the lines of The Magnificent Seven or The Dirty Dozen. But those characters were assembled with purposes in mind. The Hateful Eight are simply eight terrible individuals.

As usual, Tarantino’s screenplay is clever and crisp. These gunslingers use language better suited for a college classroom. That’s what makes their dialogue interesting; however, such is the case in all Tarantino films – nothing new here. The acting is fabulous. No one handles a Tarantino script quite like Samuel L. Jackson; although he was better in Pulp Fiction. Tim Roth shines as the British hangman; but again, Christoph Waltz is suspiciously absent, and therefore missed, in this role. It’s great to see Kurt Russell again, and Leigh and Dern are always solid. But great acting can’t save this seemingly pointless picture.

While The Hateful Eight screenplay doesn’t double back on itself the way Pulp Fiction’s did, we are eventually privy to the day leading up to the arrival of the first four inhabitants of the lodge. Due to plot revelations, their story is not shared in chronological order – a favorite trick of Tarantino’s. But here again, this device was new and fresh in Pulp Fiction. It’s practically expected now.

I was most put off by the sporadic use of an unidentified narrator during the latter portion of the film. If a great writer like Quentin Tarantino needed to resort to a narrator (in addition to annoying chapter titles, which serve only to break up the flow and plot development), then his script needed another run through the old editing mill.

As far as the purpose of The Hateful Eight, I am at a loss. This profligate assembly of vagabonds doesn’t appear to be assembled for any other reason than to act out a mildly clever Tarantino screenplay. If the idea was to quash the old stereotype of the heroic western, Sam Peckinpah accomplished this feat 46 years ago in the far superior picture The Wild Bunch – a film in which the violence still packs a punch without going overboard the way Tarantino is wont to do. Furthermore, The Wild Bunch was an excellent western. Peckinpah understood the pacing and nuances of the genre, apparently better than Tarantino.

It’s a shame The Hateful Eight doesn’t amount to anything more than three hours of tough talk interspersed with scenes of gratuitous violence. I wanted to like this film. A lot. Unfortunately, I can’t recommend it.