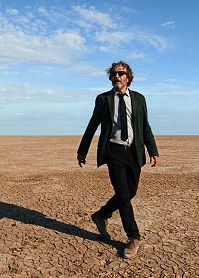 Silverio is a documentary filmmaker originally from Mexico, but who has lived and worked in the U.S. for the past twenty-plus years.  Silverio learns he will be the recipient of a prestigious journalism award, and that he will be its first Latin-American winner.  On the one hand filled with pride, but on the other introspective, Silverio takes stock of his life – of the baby he and his wife Lucia lost at childbirth, of the state of U.S./Mexican relations, and of his own lack of homeland.  He’s a bit like the proverbial man without a country.  He’s certainly not a native American, but it’s been so long that he’s lived in Mexico he barely recognizes it when he returns for a visit.

As he prepares to receive the award, Silverio flashes back to memories of his childhood, his now-deceased parents, and his young adult life.  The structure of Alejandro Inarritu’s latest film, “Bardo, False Chronicles of a Handful of Truths” is similar to that of Federico Fellini’s groundbreaking “8 1/2,” in that it’s sometimes difficult to discern the dream sequences from reality.  No issue here, as I welcome the challenge.

Inarritu’s work has often featured dreamlike visions where they seemingly don’t belong, nor do they add anything constructive to the narrative.  And here I’m thinking particularly of 2014’s Oscar-winner “Birdman,” which might have benefited from a more linear storyline.  In the case of “Bardo” however, Inarritu has fashioned a deeply personal work, which sometimes borders on self-indulgence but never ceases to fascinate us.  This appears to be the picture Inarritu has always seemed destined to make, but never has pulled off successfully. 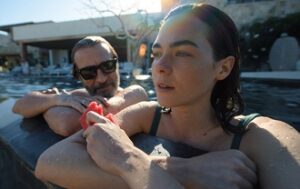 Veteran Mexican actor Daniel Giminez Cacho plays Silverio with just the right mix of determination, confusion, and introspection.  Argentine actress Griselda Siciliani is Lucia, and Ximena Lamadrid and newcomer Iker Sanchez play their children.  Lamadrid’s Camila is a college student living in Boston, and Lorenzo is a high school student.  The stillborn child Mateo preceded either of them.

At a party to honor Silverio’s award, he retreats from all the attention to the men’s room, where he makes peace with his deceased parents in the two best dream scenes of the film.  It’s here where we get a sense of what makes Silverio tick, and where he’s come from on his path to greatness.  Without these mid-film progressions, “Bardo” would be less grounded.  This is one of the year’s most challenging films, and Inarritu earns his keep with this sequence. 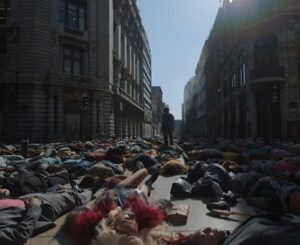 But not all of “Bardo” is reflective and personal.  In the news, the big story is that Amazon is purchasing the Mexican state of Baja California.  When Silverio meets with the U.S. ambassador to Mexico, his mind wanders to visions of the 1847 Mexican-American War – a conflict Silverio and the ambassador interpret from different angles.    Later, Silverio invisions a conversation with Spanish explorer and conqueror Hernan Cortes, sitting atop a huge pile of dead bodies accumulated from Cortes’ massacre of the Aztecs.  As Silverio walks the crowded streets of Mexico City, those around him fall over, one-by-one, to their deaths, in a representation of the thousands killed by Mexican drug cartels and the accompanying organized crime.

“Bardo” is as much a reflection on the country of Mexico as it is a personal film about a man who can no longer call Mexico his home.  In this sense, it’s similar to Alfonso Cuaron’s 2018 hit “Roma” – another film in which a Mexican director reflects on his childhood and the state of his homeland.  The comparisons end there, however, as “Roma” was a story told on a much smaller scale, and with less pretension.

Again, “Bardo” is very representative of “8 1/2.”  The opening sequence is so evocative of the beginning of the Fellini film – in which Marcello Mastroiani’s character is being flown like a kite – that Inarritu practically invites the comparison from the outset.  That’s an analogy that takes a lot of boldness; a director can’t draw the comparison unless his work is at least half the quality of the Fellini masterpiece.

While I don’t put “Bardo” in the company of “8 1/2,” I tip my hat to Inarritu for trying to recreate at least the challenging structure of perhaps the greatest Italian film of all time.  Had Inarritu failed, he would be considered an egotist.  The fact that he succeeds marks him as one of our greatest living directors.  Again, this is the film that’s been brewing inside Inarritu his entire career.  It’s a testament to his drive and creativity that he got it made in the first place.  The fact that “Bardo” is intriguing and involving proves his mettle as a filmmaker.  This is one of the year’s best films.