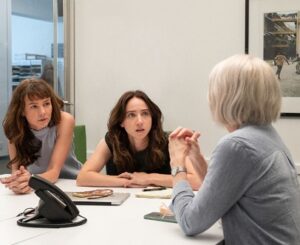 In October of 2017, the New York Times published an investigative report exposing the abuse and sexual misconduct of Hollywood producer Harvey Weinstein.  The Times article revealed an ongoing pattern of sexual abuse against women, including actresses hoping to establish film careers.  The Times publication caused many additional women to come forward with their own stories of Weinstein’s malfeasance – eventually resulting in his firing by Miramax, and a 23-year sentence for rape and sexual assault, which Weinstein currently serves.  This expose of Weinstein’s impropriety launched the viral #MeToo movement.

The following year, investigative reporters Jodi Kantor and Megan Twohey authored a book about their investigation, which has now been made into a major motion picture called “She Said.”  German director Maria Schrader has been active for many years, including last year’s German language winner “I’m Your Man.”  At first, she seems an odd choice to drive this story, although she is so far outside the Hollywood mainstream her selection almost makes sense. 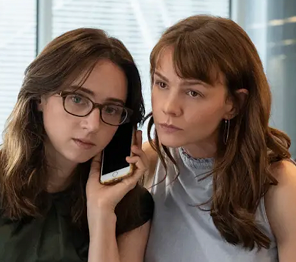 The mechanics of print journalism

In the roles of Kantor and Twohey are Zoe Kazan (“The Big Sick”) and Carey Mulligan (“Promising Young Woman”) – two highly accomplished actresses who guide us through the mechanics of investigative print journalism.  We follow Kantor and Twohey through a bevy of telephone interviews of famous actresses (including Gwyneth Paltrow and Ashley Judd) who corroborate similar stories of Weinstein’s using his powerful position to extract sexual favors.  Unfortunately for the Times, none of these women wants to speak “on the record,” for fear of careeer backlash.  Weinstein was so powerful he could destroy a career just as quickly as he could make one.

This should make for a fascinating film experience particularly given the widespread attention the media gave to Weinstein’s downfall.  It should be captivating to witness the process by which Weinstein’s dalliances and morbid behavior were brought to light.  “She Said” should be as riveting as the 2015 Best Picture winner “Spotlight,” which showed how Boston Globe reporters first disclosed the widespread pattern of child sex abuse by Roman Catholic priests, and the subsequent cover-up by the church.  Along with the 1976 hit “All the President’s Men,” “Spotlight” set the standard for motion pictures about investigative journalism.

Not in the same class

I wish I could say “She Said” is in that same class of films that show us the engrossing and important work journalists perform.  But while “She Said” is certainly not a bad picture, it simply doesn’t rise to that level of excellence.  Part of the problem is that each of the interviewed actresses erects the same barrier for Kantor and Twohey:  They patently refuse to jeopardize their careers by exposing behavior they know is deplorable.  So for us, the humble viewers of “She Said,” we know it’s only a matter of time before someone agrees to speak on the record.  By contrast, there were many proverbial balls in play with the investigative journalist unit in “Spotlight.”  That story approached the church scandal from many different angles.  “She Said” seems pedestrian by comparison.

Furthermore, Weinstein gets wind of the Times work prior to publication, and sends a lawyer and accountant to New York to share his side of the story.  This was never the case in “Spotlight,” where the church (and Globe readers) were taken by surprise the morning the story hit.  I realize Weinstein’s prior knowledge is a fact, and therefore had to be shared by the filmmakers, but the prior involvement of Weinstein’s henchmen softens the blow of the work Kantor and Twohey are performing.  In a way it’s unfortunate “She Said” has been released just seven years after “Spotlight” set the standard for films about investigative journalism.  But I can’t help that.  It’s reminiscent of any science fiction films of the 1970s.  Stanley Kubrick’s “2001: A Space Odyssey” re-set the bar for sci-fi films in 1968, and nothing released in the intervening years has matched its excellence.

The importance of investigative journalism

Remember in “Spotlight” when the investigative team members each shared their own histories of growing up in the Catholic church?  The team leader, played by Michael Keaton, crystallized the gravity of their soon-to-be-published front page story for all his co-workers.  Their work would soon bring down one of the pillars of their own lives, their country, and certainly in the primarily Catholic city of Boston.  His goal was to ensure each writer understood the importance of their work.

There was a similar scene in “All the President’s Men,” in which Washington Post reporters Bob Woodward and Carl Bernstein (played by Robert Redford and Dustin Hoffman) discussed the fact that their soon-to-be-published work could possibly result in the dismantling of the presidency of the United States – the highest office in the land.  An office heretofore represented by some of the greatest statesmen the country had ever known.  Their work was about to destroy the sacredness of the pillar of our government. 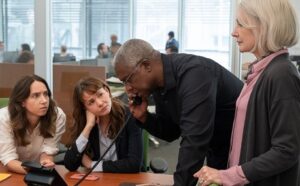 There’s no such scene in “She Said.”  Granted, the subject of this investigation is a Hollywood mogul – certainly not on the same level as the Catholic church or the executive branch of U.S. government.  But one would think Kantor and Twohey, along with the Times editors (played effectively by Patricia Clarkson and Andre Braugher) would have huddled together on the eve of publication to ponder the realization that their work might just ignite a nationwide movement of women standing up to the despicable men who used their powerful positions to incite physical and mental abuse.  Such a scene is almost suspiciously missing in “She Said.”  Even if such a conversation never occurred, one would think screenwriter Rebecca Lenkiewicz might have inserted such a hard-hitting episode when adapting the source material.

Again, “She Said” is not a bad film.  It simply pales in comparison to both “Spotlight” and “All the President’s Men.”  Like it or not, the bar has been set very high for stories of investigative writing.  And “She Said” simply doesn’t measure up.