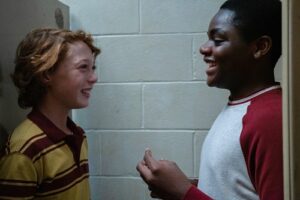 In 1980, it’s the first day of sixth grade for 12-year-old Paul Graff, a Jewish-American student living in Queens with his mom, dad, and older brother.  He quickly makes friends with Johnny, an African American boy repeating sixth grade.  Paul and Johnny proceed to get into trouble.  And not just any trouble.  They detach from their class on a field trip to the Guggenheim Museum, and spend the rest of the day riding the subway and creating general havoc.  Johnny is obviously not a good influence, although he seems to have a big heart.

After being called in to the principal’s office, Paul’s parents decide to place him in the same private school as his older brother – even though this will be a financial strain on the family.  Paul doesn’t make close friends at the private school – where suits & ties are required for the boys, blouses & skirts for the girls.  Most of the students have never met a black student, let alone befriended one.  Meanwhile, Johnny lives with his grandmother, who suffers from dementia or Alzheimer’s.  When the authorities move her into a subsidized nursing home, Johnny takes up residence in Paul’s treehouse – unbeknownst to Paul’s parents.

This is the premise of James Gray’s new film, “Armageddon Time,” a coming-of-age story, which falters because of obvious plot twists, and characters which are not fleshed out.  Gray’s last picture was the equally underwhelming 2019 sci-fi flick “Ad Astra,” which starred Brad Pitt in a saga of an astronaut who had to fly to the outer reaches of the solar system. 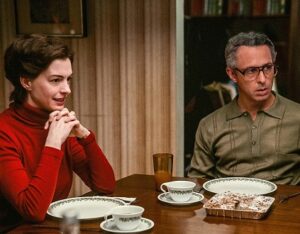 “Armageddon Time” stars Anne Hathaway as Paul’s mother, and, in a confounding role, Jeremy Strong (“Molly’s Game,” “Zero Dark Thirty”) as Paul’s father – a man who pivots between fun-loving and holy terror with the flip of a switch.  Unfortunately, his character is so underwritten we have no idea why his moods fluctuate in this manner.  Early on, Paul’s mother refers to Dad’s temper, but there’s more going on here than an overactive temper.  Either that or Strong overplays the role, but that’s most likely a directorial choice, not his.

Paul’s confidant amid the family chaos (which includes great aunts, cousins, and so forth) is his beloved grandfather, played by the always spot-on Anthony Hopkins.  While his parents openly discourage young Paul from pursuing his dream of becoming a professional artist, Grandma encourages his aspiration by buying him a set of paints.  Paul and Grandpa share their innermost secrets in a way the parents simply cannot – either by their choice, Paul’s choice, or (most likely) some combination thereof.

In the best performance of “Armageddon Time,” newcomer Banks Repeta nails the part of Paul.  Twelve is a tricky age to apply to film.  Play him too young and he seems immature; play him too old and he comes off as implausibly worldly.  Another newcomer, Jaylin Webb, is also convincing as Johnny – although I wish Gray’s original screenplay would have devoted more time to his character.

I realize this story is told through the eyes of Paul, but I would like to have seen Johnny’s home life with his grandmother.  What happened to Johnny’s parents?  How demented is Grandma?  Is there a social worker assigned to Johnny’s case who might be able to help him?  These questions remain unanswered, even though the Johnny character practically begs for more depth.  When two older African American boys on the subway overhear Johnny’s goal of becoming an astronaut, they verbally berate him for dreaming beyond that which society offers black people.  Again, I would like to have seen more emphasis on Johnny’s character, which is the pivotal role here.

And the plot twists are almost too blatantly overt.  For example, is it any surprise that the privileged white kids at the private school all want Ronald Reagan to win the 1980 presidential election, while Paul’s working-class family does not?  And when Paul’s mother announces that Grandpa has bone cancer, we know it’s only a matter of time when Paul will have to rely on his memory of Grandpa to help him through life’s struggles.

Furthermore, “Armageddon Time” ends one scene too soon.  When Paul takes his late grandfather’s advice and leaves his house to stand up for his black friend, Gray fades to black, leaving us to imagine how this final scene might play out.  I realize that’s done on purpose – David Mamet used to write screenplays like this all the time – but I don’t think this technique works here.  In this case, we’re begging to watch what would be the climactic scene in the movie, and we’re robbed of the chance to see it.

“Armageddon Time” certainly isn’t a terrible film, but I simply cannot recommend it when there are so many other more worthy pictures out this time of year.  This one is likely to become lost in the Oscar shuffle, and that’s okay with me.  Chalk this one up as a hit and a miss.