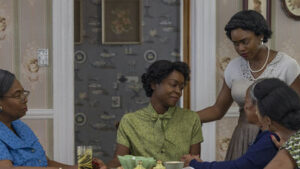 In the summer of 1955, 14-year-old African American Emmett Till infamously rode the train from his home in Chicago down to rural Mississippi to visit his cousins.  When he jokingly whistled at a white woman, he was lynched by white supremacists.  His death triggered the Civil Rights Movement, and eventually led to legislation in the 1960s which abolished segregation and criminalized discrimination.

His familiar story is now the subject of a major motion picture called “Till.”  Directed by Chinonye Chukwu (who made the death row drama “Clemency” in 2019), “Till” introduces us to young Emmett (known as “Bo”), his protective mother Mamie, her parents, and other friends and family.  We learn that Bo comes from a close, tight-knit family.  So, it’s only logical that he would want to spend time with his distant cousins.  And it’s also only logical that his mother would fear for his safety.  After all, Bo is only 14, he’s never traveled this far alone, and (perhaps most importantly) he’s simply not used to the degree of racism in the 1950s South.  But every time Mamie attempts to prepare her son for the different social norms of the South, he resists.  “I know, Mom” becomes his mantra.

We then spend some time with Bo and his Mississippi relatives before “the incident,” followed by the kidnapping, and then the news media coverage.  We live vicariously through Mamie as she navigates the horror of the killing of her only child, the publicity, the comfort of family and friends, and the anger toward not only the perpetrators of the crime, but against a society which would allow such tragedy to occur in the first place.  Insisting on an open-casket funeral so the world can see the revulsion and feel her pain, Mamie Till becomes the unlikely spark that fuels the fire of the Civil Rights Movement. 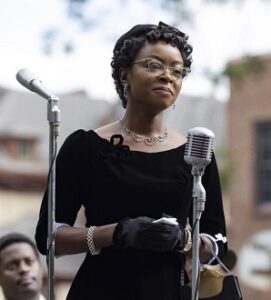 Brilliantly encompassing all the emotion and anger, Danielle Deadwyler (who was in “The Harder They Fall” last year) turns in an Oscar-worthy performance as the woman who takes the proverbial bull by the horns and won’t let go until the world changes.  It’s an important role, a dazzling performance, and a story which never gets old.  Every now and then, we need to revisit the stories of Rosa Parks, Martin Luther King, and Emmett Till.

Whoopi Goldberg (who also produced “Till”) stars as the boy’s grandmother, Frankie Faison is Grandpa, and newcomer Jalyn Hall does an excellent job of capturing the happy-go-lucky essence of young Emmett.  The original screenplay (by Chukwu, along with Michael Reilly and Keith Beauchamp) is occasionally cliché, and given to preachiness, but is overall quite strong.

My only criticism – and it’s not at all a criticism of the outstanding work that is “Till” – is that we know this story.  It’s perhaps the most famous story of the Civil Rights Movement.  There’s nothing new here.  True, most of us know nothing about Emmett Till’s grandparents.  But there’s nothing in “Till” that doesn’t surprise us.  Emmett’s grandparents react exactly as we would expect them to react.  Even Mamie’s array of everchanging temperament is not unexpected, given the catastrophe thrust upon her.

And it’s exactly because of this familiarity that “Till” lacks the sense of urgency it requires.  Yes, there is one scene in which Mamie addresses a crowd in Harlem shortly after the media attention dies down.  Here she makes the point that the silence and complacency of the black community is no longer acceptable.  She begs for their voices to be heard.  This obviously equates to today’s Black Lives Matter movement.  But this call to action is couched in a 67-year-old story we all know.

The example of Spike Lee

Consider the trajectory of Spike Lee’s career.  In 1989, his “Do the Right Thing” was one of the year’s best and most hard-hitting films.  Recall how white viewers (including me) didn’t understand why black audience members cheered when Lee’s character threw a trash can through the front window of a white-owned diner in a black neighborhood.  Was the owner’s only crime that the racial make-up of the neighborhood surrounding his longtime family business had changed?  Lee gave us all something to think about.

In 2018, Lee gave us “BlacKkKlansman,” the true story of a young black police officer who infiltrates the local KKK operation in Colorado Springs.  In 1972.  Fifty years ago.  While I loved “BlacKkKlansman” (and even included it on my year’s Top Ten list), it lacked the importance of Lee’s earlier work.  This was a story of the long-ago past.  White people could watch “BlacKkKlansman” and pat themselves on the back to see how far society had come during the intervening years.

No sense of urgency

Of all the great films of 2018, the Motion Picture Academy bestowed its Best Picture Oscar upon “Green Book,” an excellent film, but one which white audiences could watch and feel good about racial progress.  Meanwhile, “The Hate You Give” and “Waves” flew under the radar.  They also served to ruffle the feathers of any white audience member who saw them.  “The Hate You Give” centered around the killing of a young black man by a white cop.  “Waves” dealt with the horror of a black man who kills a friend at a party.  White people didn’t see these films; didn’t want to deal with the reality.  These films were modern-day horror stories.  No feel-good moments here.  No pushing boundaries.

Unfortunately, “Till” (in all its excellence and Oscar-worthiness) is simply not pressing or timely.  It’s a great picture about an important time in history.  But it is history.  It’s the past.  White audiences will love it.  And nothing will change.