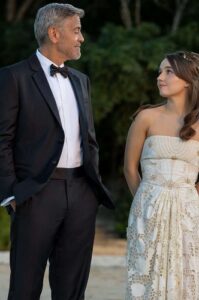 David Cotton is a prominent Chicago architect.  Georgia Cotton is a Los Angeles art curator.  They were married once – a long time ago.  Their five years of matrimony produced one daughter, Lily, who graduates from law school as Ol Parker’s “Ticket to Paradise” commences.  The Cottons are obviously smart and well off, and Lily even has a job lined up with one of Chicago’s top law firms.  But first, she and best friend Wren take a post-graduation respite to the Indonesian island of Bali, where Lily meets, and instantly falls in love with, a local seaweed farmer named Gede.

This is the implausible premise of one of the most predictable romantic comedies to come along in a while.  But “Ticket to Paradise” presents somewhat of a conundrum.  On the one hand, I wish screenwriters Parker and Daniel Pipski had taken more time to develop the romance between Lily and Gede.  On the other, the fact that Lily’s parents are the stars of the show is perhaps this picture’s saving grace.  You see, David and Georgia are played by George Clooney and Julia Roberts, now starring in their fifth film together.

At the outset of “Ticket to Paradise,” David and Georgia hate each other.  Apparently, their divorce ended on difficult terms, and the two have successfully avoided one another since.  Having to fly together to Bali, stay in hotel rooms located right next to one another, and spend mutual time with Lily brings up all manner of old wounds.  Although, because this is a rom-com, and Clooney and Roberts are instantly likeable talents, their bickering is only so jaded.  We know almost from the first time we see these two together that their quarreling will eventually soften, and they will (perhaps) end up back together, which would be much to Lily’s delight.

You see, David’s and Georgia’s animosity toward one another hasn’t softened in twenty years, which is difficult to believe.  And exactly as we expect, their reminiscences conjure up memories of the few happy years they spent together.  Eventually the positive memories wash over the bad, and we realize we may be on our way to an entirely unbelievable, but crowd-pleasing, conclusion. 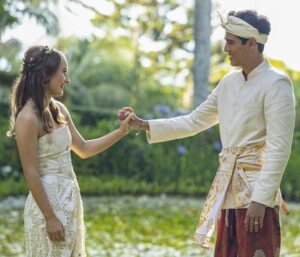 The catalyst that begins to soften the Cotton’s old wounds is their mutual desire to end Lily’s seemingly ridiculous craving to marry a man she just met, whose large and close-knit family live halfway around the world, and whose socio-economic status is decidedly lower than hers.  Talk about a summer fling exploding in your face!  And again, we’re not the least bit surprised that Lily’s and Gede’s relationship is built on a more solid foundation than that of David and Georgia.  Again, that’s inconceivable, but it makes perfectly good sense within the context of the feel-good romantic comedy that is “Ticket to Paradise.”

Complicating matters is the arrival in Bali of Georgia’s French boyfriend Paul, played by Lucas Bravo.  His character really isn’t necessary, but it makes for a couple extra laughs.  Lily is played by Kaitlyn Dever; French-Indonesian actor Maxime Bouttier plays Gede, and in the best supporting performance of the film, Billie Lourd (“American Horror Story”) is Wren, the best friend who tags along but seems to know more about relationships than any of the protagonists. 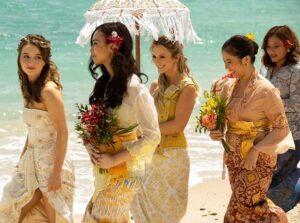 “Ticket to Paradise” is the type of movie Neil Simon used to churn out year after year.  Instantly predictable, light as a feather, and cute as a button.  You can almost picture Goldie Hawn and Chevy Chase handling these roles in their younger years.  In fact, Parker’s and Pipski’s original screenplay almost has a Neil Simon rhythm to it, as two or three lines tend to lead up to the comic payoff line.  Clooney’s and Roberts’ quips practically invite rimshots after each utterance.

Having said all this, I cannot deny that “Ticket to Paradise” isn’t a lot of fun.  Leave all sense of reality in the car when you see this one.  It’s implausible as anything you’ve ever seen, and the characters do certain things that will make your head spin.  But it’s instantly enjoyable almost from the outset.  We don’t get many rom coms anymore, and while “Ticket to Paradise” certainly doesn’t rank in the top fifty ever made, it’s nice to occasionally relax and enjoy a movie without having to think too hard.  The critic in me wanted to hate this one; the human in me enjoyed the heck out of it.