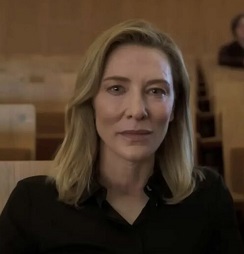 Lydia Tar is a very accomplished orchestra conductor.  She’s directed several of the top symphony orchestras in the U.S., and now she leads the noted Berlin Philharmonic.  Lydia is serious about her work and her life.  Everything in Lydia’s world is organized and logical.  She’s in charge of her orchestra, her home life, and everything else.  She is played by Cate Blanchett in Todd Field’s new drama, “Tar.”

At first, “Tar” would appear to be a film about nothing, save for an expose about an adept conductor.  Not that there’s anything wrong with that; let’s face it, we don’t get many films about those who lead symphony orchestras.  But as we see Lydia go about her daily activities, we believe there must be something more to this film.  We would be correct, but it takes a while for Field’s original screenplay to zero in on which aspect of Lydia’s life will initiate her downfall.

Sources of tension arise when we learn Lydia wants to replace her assistant conductor – presumably with her proficient assistant Francesca, played by French actress Noemie Merlant.  Lydia meets frequently with Andris, her predecessor at the Berlin Philharmonic, who is played by veteran British actor Julian Glover.  Lydia also has a backstory regarding a former colleague whom she blacklisted following a relationship.

Lydia now lives with her wife Sharon (Nina Hoss), who also serves as her first-chair violinist, and their adopted daughter Petra.  In one of the most telling scenes, Petra complains to her parents about a schoolyard bully.  Lydia doesn’t approach the bully’s parents; nor does she approach the teacher.  Instead, Lydia goes right to the bully and threatens her to leave Petra alone. 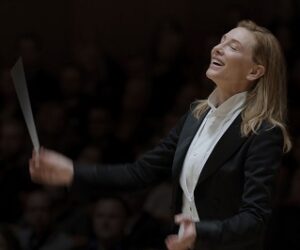 Yes, Lydia Tar is very much in charge of every aspect of her life.  Which only heightens her inevitable downfall.  This riches-to-rags story is akin to some of Martin Scorsese’s best work, although instead of gangsters (“GoodFellas,” “Casino”) or corrupt businessmen (“Wolf of Wall Street”), “Tar” is about an orchestra conductor.

Spearheading this involving and unique effort is Cate Blanchett, so good in “Carol,” “The Aviator” and other films.  She won an Oscar for Woody Allen’s “Blue Jasmine.”  She’s better here.  She carries “Tar” in the way certain actors will embrace a role so convincingly their film either rises or falls based solely on their performance.  I’m thinking of Tom Hanks in “Forrest Gump.”  Everyone loved “Forrest Gump,” but picture it with a different actor.  Can’t be done, right?  Such is the case here.  No one else could embody this role the way Blanchett does.  And she is perfect.

The film itself is a winner, but not in a stand-up-and-cheer kind of way.  “Tar” is a heavy drama, which reminds me in a way of Darren Aronofsky’s “Black Swan,” in that at its conclusion we realize we’ve witnessed greatness, but it’s not necessarily something we want to sit through again right away.  “Tar” takes some time to consider.  It invites reflection and discussion.  This is a good thing, but don’t expect to leave the theatre excited about life.  This isn’t “Rocky.”

As the Oscar season approaches and studios roll out their top works of the year, “Tar” is one we’ll be talking about.  And Cate Blanchett is a shoe-in for at least a Best Actress nomination, if not another outright win.  She’s that good.  And this film is one of the year’s best.