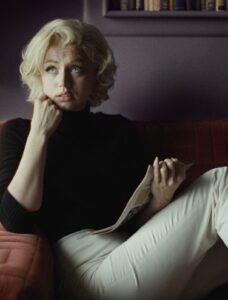 In this day and age of an almost overabundance of celebrity biopics, it’s important to keep in mind that Andrew Dominik’s “Blonde” is based on Joyce Carol Oates’ 2000 novel of the same name.  Her novel was a fictionalized interpretation of the life of Marilyn Monroe.  In other words, Dominik’s adapted screenplay is full of assumptions, and plays loose with facts.

If we know this going in, we know not everything in “Blonde” is true.  In other words, did Joe DiMaggio physically abuse Marilyn?  I don’t know, but it doesn’t matter here.  It’s in Oates’ novel, so it’s in Dominik’s film.  Did Marilyn’s mother keep a photograph of her absent father on the wall above her bed?  Not sure.  But it’s in this film.

For that matter, almost everything that happens to Marilyn in “Blonde” is somehow related back to the fact that she never knew her father.  That would appear to be the driving force of the narrative.  Every time Marilyn experiences hardship – which would appear to be about every other day, per this screenplay – she imagines the voice of her absent father, promising he would come soon to save her from her unpleasant existence.  Truth be known, if (and that’s a big “if”) Marilyn did “talk” to her dad on occasion, therapists would consider doing so a coping mechanism – not necessarily the basis for a feature length film.

Ana de Armas (“Knives Out”) captures the essence of Marilyn Monroe (complete with that sultry, breathy voice), if not providing an exact imitation.  As we expect, she is tasked with carrying this film.  All other roles are supporting.  Bobby Cannavale plays Joe DiMaggio, Adrien Brody is Arthur Miller, and in the best supporting performance, Julianne Nicholson plays Marilyn’s mentally disturbed, abusive, alcoholic mother.  It’s a tough role to play, and Nicholson plays it sharp, without overdoing the cruelty.

Unfortunately, “Blonde” would have us believe Marilyn’s life was nothing but cruelty.  From her first Hollywood “audition” (an unwanted sexual encounter with a studio executive) through her two marriages, and her slave-like escapades with President Kennedy, Marilyn is portrayed as the victim only – never in control of her own destiny.  Some of this may be very true, but a little of it goes a long way.  Eventually, we see so many men take advantage of this beautiful sexpot that we simply don’t want to see anymore.  “Blonde” is an overlong film (almost three hours) that never advances.  Marilyn is abused and imposed upon by every man she’s ever known – except for that absent father, who may someday come to save her from the mess that is her life.

Not a pretty picture

If that doesn’t sound like a pretty picture, it isn’t.  There’s almost nothing to cheer about – and absolutely no one to cheer for (including Marilyn herself) – in “Blonde.”  We see her decline practically from the time her Hollywood career begins.  We don’t feel as if she ever really loves either of her husbands.  We do see her go through two abortions – one forced upon her by studio execs, one accidental – that cause her to hear voices from her unborn babies.  So, she talks with her dad and her children, pops pills, and is essentially forced to do whatever the men in her life want her to do.  “Blonde” is perhaps the most unpalatable film so far this year.  It’s difficult to watch, and almost physically draining.  When the closing credits roll, we feel like we’ve been through hell and back.

I’m sure that’s the intent, but it certainly doesn’t make for an amiable evening at the movies.  I maintain there must have been something in this world that brought happiness to Marilyn Monroe.  There must have been at least one or two experiences in her life that she would call triumphant.  “Blonde” would have us believe otherwise.  Even when she lands a coveted role – such as her iconic work in “The Seven Year Itch” or “Some Like it Hot” – she’s not shown as happy or excited.  De Armas spends more time crying in this picture than in any I’ve ever seen.  This is a very bleak interpretation of the life of one of Hollywood’s legends.

Relief that it’s over

DiMaggio is depicted as insulting and offensive; Miller is depicted as unattached and distant; and John Kennedy comes off as nothing more than a cad.  I’ve read Oates intended her novel to be a feminist work.  But that goal would be accomplished only when the exploited protagonist rises up against the forces of evil – a la Whoopi Goldberg’s Celie character in “The Color Purple.”  But in “Blonde,” such a victory never occurs.  When Marilyn finally dies in 1962, it’s as much a relief as it is a closure.  Marilyn is relieved of her suffering.  And we’re relieved of spending another minute watching “Blonde.”