Emily is a recent college grad.  An art major, she’s saddled with seemingly insurmountable college loan debt, and a dead-end job delivering food for a local catering company.  As she makes her deliveries, we know Emily (Aubrey Plaza) can’t help but wonder what it must be like to be a part of this corporate world of movers and shakers.  Emily’s best friend Liz (Megalyn Echikunwoke) is constantly trying to garner a position for Emily at her ad agency, but to no avail.  Unfortunately, a stubborn and never-explained felony conviction prevents her from not only climbing the corporate ladder, but even approaching the ladder in the first place.

Through a mutual connection, Emily is recruited as a dummy shopper for Youcef, an independent businessman whose primary purpose in life would appear to be credit card fraud.  He sends his “employees” to various shopping centers to purchase pre-determined items using phony credit cards; then Youcef re-sells them to others.  It’s shady, and obviously fraudulent, but the pay is good – even though the pay occurs only once the merchandise is returned to Youcef.

Emily seems to have a knack for this kind of work, although she still longs for that elusive corporate graphic designer position.  And her mountain of student debt couldn’t be more perfectly timed with real life, although newcomer director and screenwriter John Patton Ford couldn’t have possibly known that when he set out to make “Emily the Criminal.”  Let’s just say President Biden’s recent $10,000 student loan forgiveness would be a mere drop in the bucket for Emily. 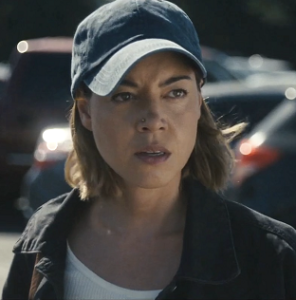 “Emily the Criminal” is a showcase for actress Aubrey Plaza, who made such a big splash in the dark comedy “Ingrid Goes West” – one of my top ten films of 2017.  That was the intriguing film about the girl who befriends a Facebook socialite in an attempt to hang out with the rich and famous – much as Emily pines for corporate success.  It would be hard to describe “Emily the Criminal” as a comedy, although Plaza’s character is similar – more mature, but similar.

Plaza is perfect in this role, and Ford smartly shies away from defining Emily as nothing more than a forceful, aggressive female lead, a la “La Femme Nikita” or “The Girl With the Dragon Tattoo.”  Emily is a richly developed character, and the fact that the felony conviction is never explained is immaterial to the story.

Another smart directorial choice is the elimination of establishing shots.  It doesn’t matter what Emily’s catering company looks like from the outside.  It only matters that Emily is working on the inside.  “Emily the Criminal” is a story about Emily.  And nothing else.  We don’t need to see her apartment building, or Youcef’s apartment building, from the outside.  We glean enough information about the characters from the interiors.

I do not like the fact, however, that Emily and Youcef (played by Theo Rossi) have a short relationship – a relationship borne out of the fact that Youcef “needs” a girlfriend for a particular party he attends.  Narratively, an ensuing affair adds nothing to “Emily the Criminal,” and in fact serves only to blur the line between Youcef as a boss versus Youcef as a friend.  He can be both without sex.  Contrast their liaison to that of the two leads in Paul Thomas Anderson’s recent “Licorice Pizza,” whose relationship developed refreshingly slowly over the film’s two-and-a-quarter-hour run time.

There’s a lot to like in “Emily the Criminal” – particularly the fact that Ford’s original screenplay stays always just one step ahead of the viewer.  And, much as in “Ingrid Goes West,” we’re never certain just how far Plaza’s character will go to achieve her goal.  The difference is that Ingrid’s goal was nothing more than securing a relationship with a media star.  Emily’s eye, however, is still on that fleeting corporate prize.  The further that prize becomes – as is displayed in an excellent late scene with Gina Gershon as a potential employer – the deeper Emily enmeshes her life with the fraud scheme.

This is one that will have viewers discussing it long after the credits roll.  And for that, I give Ford kudos for an excellent debut.  I also believe Aubrey Plaza has now firmly established herself as one of our finest young actresses.

“Emily the Criminal” is currently playing at Landmark Cinema and Living Room Theatres.