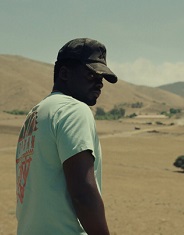 O.J. Haywood is a man of few words.  He’s spent his life, under his father’s tutelage, raising horses for Hollywood productions.  He and his far more effervescent sister Em provide horses for movies and TV shows.  But they also instruct the cast about how to treat the horses; what they can and cannot do around a horse; how to keep the animals from overreacting to sound and light stimuli.  It’s a living.  And it’s their life.  Particularly O.J.’s, as he harbors no desire for an acting career, the way Em does.

After the mysterious death of their father, the Haywood siblings fall on hard times, and consider selling their ranch to Jupe Park, a former child actor who now operates a small Western theme park established for the sole purpose of exploiting an infamous incident in which a startled chimpanzee went on a killing rage on the set of a 1990s sitcom.  Jupe was the only survivor of the so-called “Gordy’s Home” massacre.

This is the admittedly odd setup of Jordan Peele’s latest film, “Nope,” in which the sharp young talent veers away from his comfort zone in horror films to dabble this time in the supernatural science fiction genre.  You see, there’s a strange UFO hovering about the skies west of Los Angeles, which thrives on sucking people, animals, and objects into its belly, and then eliminating them miles away.  Of course, the UFO – which the protagonists name “Jean Jacket” – never “performs” in the city, but rather in the vast emptiness of the desert, where it’s hard to yell for help, much less contact the authorities.

O.J. and Em conspire to record video (“Oprah quality” video, they say) of the creature in action.  At first, they install a bevy of electronic surveillance equipment from Fry’s Electronics.  But when they realize Jean Jacket executes his prowess only after temporarily eradicating all nearby electricity (or “dousing the lamps,” if you will), they employ the services of veteran cinematographer Antlers Holst, who videos the proceedings with an old hand-cranked camera.  To tell more would be to give away too much, but suffice to say that Peele has turned out another winner.  While some have opined that the ending is too ambiguous, I find the entire film a very satisfying sci-fi mystery, in the same sense that Peele’s last film “Up” was a highly satisfying horror thriller. 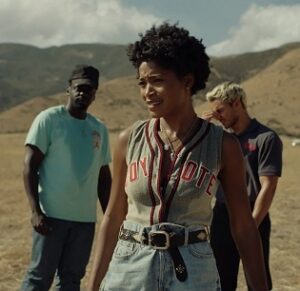 Turning up the suspense

Unlike some directors (and I’m thinking of you, Mr. Tarantino), Peele stays away from the blood and guts, in favor of heightening the suspense level, a la Alfred Hitchcock.  Peele brings us into the realm of the unknown, and each twist and turn eventually makes sense.  Remember the WWII airline pilots who disappeared at the beginning of Steven Spielberg’s “Close Encounters of the Third Kind?”  That opening scene didn’t seem to have any connection to the rest of the film until the very end, when it all made sense.

Peele throws us several of these cinematic curve balls in “Nope,” and they serve to make the experience richer and deeper.  Peele (who also wrote the screenplay) allows us to discover the unknown with his characters, as opposed to making the audience some sort of omniscient observer.  He puts us closer to the action, and involves us, as the layers of plot are peeled back.

Peele also benefits from an excellent cast, including Daniel Kaluuya, who played the lead in Peele’s first film, “Get Out.”  Keke Palmer (who was a child actress in “Akeelah and the Bee”) plays Em.  Steven Yeun is Jupe, and veteran deep-voiced character actor Michael Wincott plays Antlers.  In what turns out to be a surprisingly strong supporting performance, newcomer Brandon Perea plays the Fry’s salesman who provides the electronic surveillance equipment.  His interest in UFOs thrusts his character into more prominence as the story progresses.

Ripe for a sequel

Since Jean Jacket is not eliminated, and since the primary leads all survive, “Nope” seems to be ripe for a sequel.  I hope Peele doesn’t succumb to the sequel bait.  Better to let “Nope” stand on its own merit.  It’s a strong, and highly involving, film.

What does it mean?

The subject for debate will inevitably be what does this all mean?  There is a recurring theme of the way we treat animals – from the horses on the Haywood’s farm to the chimp in the sitcom – which seems to play out in the form of Jean Jacket.  It’s almost as though Jean Jacket is taking on the animals’ revenge on society.  But even that may be a stretch.  Unlike recent sci-fi films like “Interstellar” and “Arrival,” I don’t believe Peele’s goal is to make some overarching commentary on humanity.  Instead, it’s best to take “Nope” for what it is – an eminently engaging science fiction mystery that leaves us contemplating and discussing it for weeks after our initial viewing.  It’s a strong effort from a young, talented writer and director.