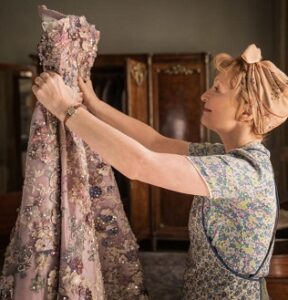 Ada Harris is a British cleaning lady in 1957 London.  Her husband disappeared during WWII, and Mrs. Harris has yet to pick up the pieces of her life and move on.  Instead, she continues her drab, workaday life.  She has a few close friends and enjoys evenings at the local legion hall.  But her life is (How shall we say this politely?) boring.  Even her clothing is reminiscent of the kinds of frocks Edith Bunker would have worn in the ’50s.

One day, Mrs. Harris is drawn to a beautiful Christian Dior dress owned by one of her rich clients.  Determining on the spot that she must have one as well, Mrs. Harris goes about the task of making enough money to afford both the dress and a trip to Paris.  In her methodical manner, she calculates how much she’ll need and how she intends to earn it.  Yes, she presses some of her clients for pay increases (or at least to clear up old invoices), but she also takes some uncharacteristic steps – such as betting on a longshot at the local dog track.  Out of character?  Yes.  But at least Mrs. Harris now has a goal.

This is the setup for Anthony Fabian’s delightfully entertaining “Mrs. Harris Goes to Paris,” adapted from Paul Gallico’s 1958 novel.  As Mrs. Harris, Lesley Manville could not be more perfectly cast.  Manville is primarily a character actress, although she and Jim Broadbent carried the 2010 drama “Another Year.”  Her most noteworthy recent performance was in Paul Thomas Anderson’s 2017 offering “Phantom Thread” – ironically another film about the fashion industry. 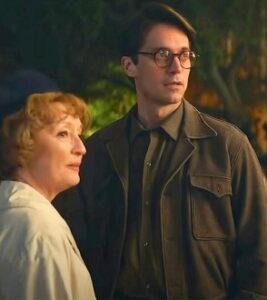 When Mrs. Harris finally arrives in Paris, we are introduced to a new set of characters, each of whom is connected in some way to Christian Dior.  The great French actress Isabelle Huppert is somewhat wasted in the role of the haute couture office manager Claudine, who resents the fact that a British commoner can arrive unannounced – with cash in hand, mind you – and convince Dior to make her a custom gown.  For that matter, Claudine resents everything about Mrs. Harris – including the way she easily connects with other Dior employees.

Specifically, Mrs. Harris stays in Paris while her dress is being made – at the apartment of Dior accountant Andre (French actor Lucas Bravo), at his request, no less.  Mrs. Harris helps Andre find the nerve to ask Dior model Natasha for a date – while simultaneously helping Natasha with various life struggles.  Everyone seems to love Mrs. Harris.  Except Claudine and (although he’s not a major character) Mr. Dior himself.

Mrs. Harris has one of those warm, approachable personalities that others are naturally drawn to.  Her close friends and her clients in London would do anything for her, and her friendship releases some of the tension amongst the employees at Dior.  She’s an instantly appealing character, and Manville’s performance is, dare I say (as I know it’s early) worthy of an Oscar nomination.

As Andre and Natasha, Bravo and Portuguese actress Alba Baptista are memorable.  Their characters stand out amongst the fairly large cast.  Likewise, Jason Isaacs and Ellen Thomas stand out amidst the London cast.  Isaacs’ Archie has had a thing for Mrs. Harris for some time, and Thomas’ Vi is Mrs. Harris’ best friend and confidant.

While the outline of “Mrs. Harris Goes to Paris” is fairly straightforward, Fabian and his other three screenwriters continue to throw us just enough curve balls to hold our interest.  But although Mrs. Harris occasionally takes steps that surprise us, the proverbial curve balls are not so far out of the ordinary as to negate the logic of the script.

While I warmly enjoyed “Mrs. Harris Goes to Paris,” I was most grateful for the long denouement.  In an age where the “big scene” ties up all the loose ends and sends us briskly to the theatre exit (see “Top Gun: Maverick”), Fabian’s screenplay takes its own sweet time wrapping up various story threads.  And during the final scenes in Paris and London, we are in for a few more surprises.

This is a thoroughly enjoyable summer film for adults.  And by that I mean those of us who desire to see motion pictures in which the characters drive the story – not the special effects or the F/A-18 Super Hornets (again, see “Top Gun: Maverick”).  The word “delightful” comes to mind; as do “charming” and “absorbing.”  The Mrs. Harris character is reminiscent of Sally Hawkins’ “Poppy” from Mike Leigh’s “Happy-Go-Lucky,” in that her spirits are never dashed.  No matter what life may throw her way, she keeps her chin up, never loses sight of her goals, and enriches the lives of those around her.  One might say she makes lemons out of lemonade.  And in the movies these days, there’s nothing wrong with that!