Three years have passed since the Great American Songbook Foundation’s summer music intensive last took place in person at the Center for the Performing Arts, as the 2020 and 2021 editions were conducted online amid pandemic concerns. But now Songbook Academy 2022 is upon us, and it’s bigger and better than ever – not only for those selected students, but for the audiences who love to watch talented young people sing timeless songs. 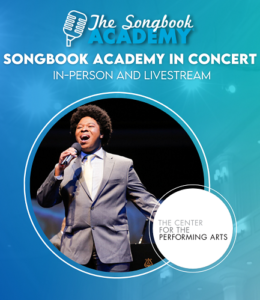 For the first time ever, Songbook fans have two options for enjoying the week’s three public performances: on-site at the Palladium, or online from the comfort and convenience of home or any mobile device. Two events – the Public Masterclass at 2 p.m. Wednesday and the Songbook Showcase at 2 p.m. Thursday – can be viewed free of charge, although pay-what-you-can amounts are accepted as donations to the Songbook Foundation.

The Songbook Academy in Concert performance at 7 p.m. Saturday, July 23, will be an expanded multimedia extravaganza featuring all 40 singers in solo and ensemble performances to celebrate their growth over the course of the week. Other highlights will include a tribute to late Broadway icon Stephen Sondheim led by emcee Michael Feinstein and a performance by 2013 Songbook Academy alumna Melinda Rodriguez, winner of the annual Ella Fitzgerald Jazz Vocal Competition and competitor on Season 17 of NBC‘s The Voice.  Awards and honors will be presented throughout the evening, and a giant video screen will display interview clips and behind-the-scenes footage from this year’s academy. On-site tickets start at just $25, and livestream registration is pay-what-you-can with a $10 minimum.

About the Songbook Academy

Songbook Academy® is a fun annual event here at the Center for the Performing Arts, as 40 of the nation’s top high school singers spend a week on campus learning from entertainment industry professionals and displaying their talents onstage at the Palladium.

From hundreds of applications nationwide, 40 finalists from 19 states have been selected to participate in this year’s Songbook Academy® summer intensive, the leading youth music program focused on the timeless standards of jazz, pop, Broadway, and Hollywood.  After being conducted online the past two years, the Academy has returned to an on-site format July 16-23 at the Foundation’s headquarters, the Center for the Performing Arts in Carmel.

Tickets for the week’s events can be reserved online or by calling (317) 843-3800. Tickets may also be obtained in person at the Fifth Third Bank Box Office, 1 Carter Green, Carmel.