In the old southern tent revivals of the mid-20th century, attendees would often experience what they described as an out-of-body experience – whereby the spirit of the Lord would overtake them.  Their bodies would shake – many said uncontrollably – as the live gospel music played.  This is how many southern blacks came to know Jesus and Christianity. 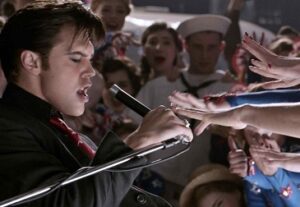 Baz Luhrmann’s “Elvis” begins with young Elvis Presley sneaking into a southern tent revival.  Initially pushed away by one of the elders because of his race, the senior pastor welcomes the young white boy to the alter, where he is overcome – not so much by the spirit of the Lord as by the music.  The beat.  The feel.  The shaking.  Oh, that joyous shaking.  Luhrmann’s cinematographer Mandy Walker then cuts to an image of 20-year-old Elvis on stage – still shaking in the same manner as in the tent revival.

There are a lot similar stylish camera cuts and fades in “Elvis,” but that’s to be expected from a Luhrmann film – flashy and showy, often at the expense of plot development.  Remember, it was Luhrmann who made the 2001 jukebox musical “Moulin Rouge.”  And in that sense, it somewhat makes sense that Luhrmann (and his entourage of three other screenwriters) would want to tackle the legend of the King of Rock ‘N’ Roll.  After all, what more can we possibly learn about one of the most famous people who ever lived?

And the answer is:  We don’t.  After 2½ hours, I can’t say I learned a single fact about Elvis that I didn’t know before – and I’m not even a particularly big fan.  The problem is that “Elvis” is all show and no substance.  Sure, newcomer Austin Butler (who did have a minor role in Quentin Tarantino’s “Once Upon a Time in Hollywood”) is excellent as “Elvis.”  He nails the moves, the voice, the charisma, and the stage presence.  As he’s told late in the film, “You’ll never be able to completely fall in love with a girl, because you are already in love with your audience.”

And Tom Hanks plays against type as Presley’s despicable handler and manager, Colonel Tom Parker.  But the two of them (in fact all the characters) are merely two-dimensional caricatures, rather than fully developed individuals.  Presley and Parker exist only as props in Luhrmann’s film extravaganza.  Casey Kasem may as well narrate this Elvis story, as Butler and Hanks play out their rolls on screen.  “Elvis” is that shallow. 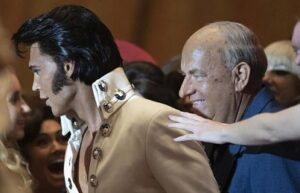 In the early going, “Elvis” shows promise.  Parker’s (nee Hanks’) narration makes a brilliant observation when he acknowledges his professional career began as a carnival barker.  His take was that people were easily sold on particular circus booths if they thought they were seeing something ever-so-slightly forbidden – such as a bearded lady, or a dwarf.  The same was true of Elvis.  Teenage girls in the 1950s were taught the differences between nice boys and not-so-nice boys.  With Elvis’ moving and shaking to rock-n-roll (itself a forbidden fruit, undoubtedly disliked by their parents), girls would attend his concerts to witness the forbidden fruit.  Elvis was the circus sideshow.  Parker merely parlayed his talents on a larger scale.

He was already the manager for country music legend Hank Snow.  But when he heard about a white boy who sang black music, his interest shot through the roof.  Many white parents (and by extension, white radio stations) would not let their children listen to black recording artists.  So, it would logically follow that a white recording artist would have to bring this music to the white audience.  Enter Elvis Presley.

Elvis’ interest in black music was almost accidental, as he was raised in subsidized housing with mostly black neighbors.  The nightclubs in nearby Memphis were the black clubs.  His friendship with B.B. King would last a lifetime.  His adoration of gospel legend Mahalia Jackson is well-known.  Luhrmann does a good job of showing that Elvis didn’t simply use black music to launch his career – but that he continued to love that culture the rest of his life.  In 1968, Presley was deeply hurt upon the assassinations of Martin Luther King and Bobby Kennedy.

Yet (and this is a big yet), while I know there’s a lot of material to cover here, I can’t believe the long running time left me wanting.  But it did.  There are a lot of missing milestones here, at the expense of (1) too much time spent on Parker’s life, and (2) countless staged concert footage which serves only to drive home the point that Elvis was more comfortable on stage than anywhere else.  We know that.  One or two scenes would have sufficed.  Instead, Luhrmann and his writing team show us nothing of Presley’s ill-fated Hollywood career.  This is a man who made 31 films.  And Luhrmann shows us not one single solitary scene of Elvis on a movie set.

Presley’s appearance on the Ed Sullivan Show (famously shown only from the waist up) is one of the two or three most famous television episodes in history.  And it garners not even a mention.  Oh sure, we see him on Milton Berle’s show and Steve Allen’s show, but where’s that iconic Sullivan performance? 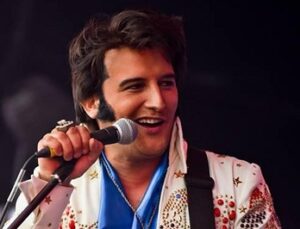 But the most egregious absence in “Elvis” is the low portion of his career during the second half of the 1960s.  Elvis was still the hottest recording artist of the rock era when the Beatles crashed the American music scene in early 1964.  They were followed by a slew of other British rock bands.  The Civil Rights movement was in full swing.  Then came Viet Nam.  The world was changing.  And Elvis was stuck in Hollywood making a bevy of corny, out-of-touch movies.  After the Beatles hit, Elvis had only one top ten hit during the five years between 1964 and 1968.  He was washed up.  A has-been.

But much as Easter is essentially meaningless unless we experience the pain of Good Friday, Elvis’ triumphant return to musical prominence in 1969 doesn’t mean anything unless we go through the “down” years.  Luhrmann eliminates them altogether.  We get a 30-second montage about the Beatles and Viet Nam, during which we’re supposed to gather that Elvis’ career was in free-fall.  But we don’t experience it.  We don’t live it.  We don’t feel it.  When “Elvis” plays on TV, a mistimed bathroom break could lead the viewer to think he’s missed an entire reel of film.

And the second most egregious absence in “Elvis” is “In the Ghetto.”  Luhrmann does show us Presley’s triumphant return, beginning with his Christmas ’68 television special, then his 1969 Las Vegas performances.  And his big comback hit?  “Suspicious Minds,” per Luhrmann.  Now, “Suspicious Minds” was Presley’s only #1 post-Beatles hit, but four months prior, in early summer of ’69, Presley returned to the Top 10 for the first time in four years with “In the Ghetto” – a heartbreaking story about the cycle of life and death in a poor inner-city black Chicago neighborhood.  Many music critics consider it the best song he ever recorded.  It is certainly his most important.  And in a film which accentuates Presley’s lifelong connection to the African American community, its omission is intolerable.  Yes, a portion of “In the Ghetto” is played over the closing credits, but by then we’re too exhausted to care.

And this may be a minor complaint, but as one who always maintained a devout Christianity (and who recorded several hit gospel albums), Elvis Presley would not have taken the Lord’s name in vain to the extent he does in Luhrmann & friends’ screenplay.  Normally, that doesn’t bother me; here is does.  This is Elvis.  Not some gangster.

Only Luhrmann could pull this off

The bottom line is while “Elvis” gives us the showy spectacle of Presley’s career we expect from a Baz Luhrmann film, the glaring omissions and surface-level treatment of the subject matter sink this ship after about an hour in.  “Elvis” is at once too long and not inclusive enough – a conundrum perhaps only Luhrmann could pull off.