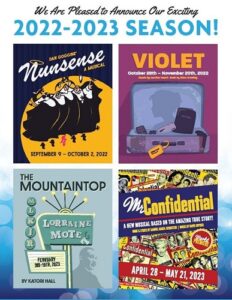 Actors Theatre of Indiana is excited to announce the lineup for their 2022-2023 season. The season begins September 9, and runs through May 21, 2023. This season promises to make you shake with laughter and perhaps move you to tears. And you will have the unique opportunity to watch a world premiere!

The season kicks off September 9 with NUNSENSE. With book, music and lyrics by Dan Goggins, this hilarious musical comedy is a delightful way to begin. When the Little Sisters of Hoboken discover that their cook, Sister Julia, Child of God, has accidentally poisoned 52 of the sisters, and they are in dire need of funds for the burials. The sisters decide that the best way to raise the money is to put on a variety show, so they take over the school auditorium, which is currently set up for the eighth-grade production of “Grease.” Here we meet Reverend Mother Regina, a former circus performer; Sister Mary Hubert, the Mistress of Novices; a streetwise nun from Brooklyn named Sister Robert Anne; Sister Mary Leo, a novice who is a wannabe ballerina; and the delightfully wacky Sister Mary Amnesia, the nun who lost her memory when a crucifix fell on her head. With star turns, tap dancing, an audience quiz, and comic surprises, whether you went to Catholic school or not, this show is habit forming!

ATI then transitions into a powerhouse piece of theatre with VIOLET from October 28th – November 20. Set in 1964 in the Deep South during the early days of the Civil Rights Movement, Violet follows the growth and enlightenment of a bitter, young, disfigured woman. In hopes that a TV evangelist can cure her, she embarks on a journey by bus from her sleepy North Carolina town to Tulsa, Oklahoma. Along the way, she meets a young black soldier who teaches her about beauty, love, courage, and what it means to be an outsider. This Tony nominated musical, which starred Tony Award winner Sutton Foster, is sure to win your heart. Music by Jeanine Tesori and book by Brian Crawley.

THE MOUNTAINTOP by Katori Hall will be performed from February 3 to 19, 2023. Winner of the Olivier Award for Best New Play, The Mountaintop is a deeply moving re-imagination of events that takes place the night before the assassination of America’s most renowned civil rights leader, Dr. Martin Luther King, Jr. On April 3, 1968, after delivering his history-altering “I’ve Been to the Mountaintop” speech, an exhausted Dr. King retires to his room at the Lorraine Motel while a storm rages outside. When a mysterious stranger arrives with some surprising news, King is forced to confront his destiny and his legacy to his people.

ATI will celebrate the spring of 2023 and wrap up its season with a World Premiere! For the first time ever, MR. CONFIDENTIAL will be presented April 28 through May 21, 2023. Some may be familiar with the story, as ATI presented a reading of the script as part of their Lab Series last year.

The sizzle starts here… A story of family, dreams, innocence, love, and scandal. When Bob Harrison created Confidential Magazine in 1952, he gave the public gossip, humor, and sex. But he also offered something totally unexpected – the truth about the rich and famous. It quickly became the #1 selling magazine in America. Soon, Bob wasn’t just telling the story, he was the story, with headlines, scandals, and a wild ride of his own. A giddy, vibrant tale set in New York and Hollywood at their most glamourous and dangerous. This is a fable, but almost all of it really happened! Don’t miss this World Premiere with book and lyrics by Samuel Garza-Bernstein and music by David Snyder.