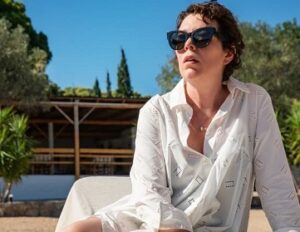 Maggie Gyllenhaal’s first go-round as a director is a winner, up to a point.  “The Lost Daughter” is one of those films that feels like it’s adapted from a novel.  And it is.  There are certain symbols and events that raise questions.  Questions that could only be answered by reading the source material.  That’s fine, but Stanley Kubrick, by contrast, could never be “found out.”  His screenplays always seemed like airtight articles of creation – whether they were adapted from other sources or not.

Still, “The Lost Daughter” is a thought-provoking and psychological drama that is bound to resonate with viewers long after the closing credits have rolled.

Olivia Colman plays college professor Leda Caruso, vacationing in Greece during her summer hiatus.  There, she meets young mother Nina (Dakota Johnson, in her meatiest post-Fifty Shades role) and her three-year-old daughter Elena, whose situation reminds Leda of her own.  Leda was also a young mother once, but something tragic apparently happened.  Did one of Leda’s daughters die?  Was a daughter kidnapped?  We don’t know; and won’t know until a certain amount of time has passed.

The great Italian director Michelangelo Antonioni’s classic “L’Avventura” is invoked when Nina’s daughter goes missing on the beach one morning.  Fortunately, Leda finds little Elena, and returns her to her parents.  Unfortunately, Leda confiscates Elena’s favorite doll, brings it to her room, and won’t tell anyone she has it – even in the midst of the parents’ posting signs all over the island requesting the toy’s return.  Little Elena is obviously upset, and we don’t know what to make of Leda’s action.  Does she want to be the hero a second time, and return the doll to the parents?  Does she harbor some pent-up rage toward young parents?

As “The Lost Daughter” unfolds, we realize Leda was herself a young mother, and, much as other vacationers (including Nina) pry for the complete story, Leda remains tight-lipped.  Meanwhile, we learn through a series of ever-increasing flashbacks, that Leda was a stressed young mother of two daughters whose professional career (and lack of an involved husband – akin to Nina’s predicament) caused her to resent her situation. 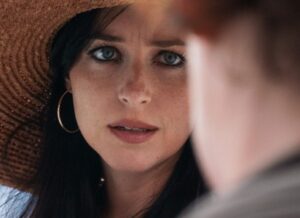 The great Irish actress Jessie Buckley plays young Leda, whose story eventually becomes more interesting than that of the middle-aged vacationing Leda.  If Gyllenhaal errs in one area, it is this.  In films where flashbacks play key roles, it’s important to keep the focus on the present-day story.  Perhaps due to Buckley, or perhaps due to our longing for more information about Leda’s backstory, we’re drawn into the narrative of a quarter-century preceding, and increasingly bored by that of the present day.

This is a recipe for a motion picture disaster, but Gyllenhaal avoids it by re-focusing our attention during the final act, when Leda comes clean with Nina, and reveals her personal journey of motherhood.

Peter Sarsgaard plays a professor Hardy, with whom young Leda has an affair while away from her husband and daughters on business.  Reminiscences of this affair resurface when Leda witnesses Nina making out with resort assistant Will (Paul Mescal).  The great character actor Ed Harris plays hotel caretaker Lyle, who knows Leda has the treasured doll, but doesn’t say anything.

“The Lost Daughter” is a film which raises a lot of questions, but does provide any easy answers.  Again, when a film begs us to read the source material (Italian novelist Elena Ferrante’s work), it has failed to a certain extent.  Still, I’m giving “The Lost Daughter” a recommendation because it is thought-provoking, and because young Jessie Buckley gives another brilliant performance in what is turning out to be a great career.  I believe it is only a matter of time before she wins an Oscar.