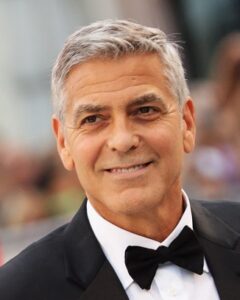 As an actor, George Clooney is one of our best.  Even when the film is only so-so, Clooney himself is able to rise above the material.  And when Clooney stars in an excellent picture, the result can be magical.  Think Alexander Payne’s “The Descendants,” which I had as my best film of 2011 – and one of my top 10 of the entire decade.  Clooney shined in that story of a Hawaiian father of two girls navigating life as his wife lay in a coma.

Hit-and-miss as a director

But as a director, Clooney’s career is hit and miss.  “Good Night and Good Luck” was an outstanding re-telling of Senator Joe McCarthy’s vendetta against CBS news journalist Edward R. Murrow.  And while certainly offbeat, “Confessions of a Dangerous Mind” brought television game show creator Chuck Barris’ personal story to life.  But more recent offerings “Suburbicon” and “The Midnight Sky” could best be described as duds.

Somewhere in the middle

Clooney’s latest, “The Tender Bar,” falls somewhere in the middle.  Based on J.R. Moehringer’s 2005 memoir, “The Tender Bar” is a first-hand account of Moehringer’s lower-class Long Island upbringing, his years at Yale University, and his early career as a journalist with the New York Times.

Now that Lucas Hedges has aged out of playing the high school or college age character in every important motion picture of the past five years, the role of J.R. is played by his apparent successor, Tye Sheridan.  Sheridan has already been seen this year in “The Card Counter” and “Voyagers.”  Now he adds “The Tender Bar” as his first lead-actor role in an “important” film.  (The irony is that Sheridan is actually one month older than Hedges – but he still looks like he could pass for a high schooler.)  Young J.R. is aptly played by newcomer Daniel Renieri, who bears a striking resemblance to… Tye Sheridan.

J.R.’s mother Dorothy loses her job, and can’t collect child support from J.R.’s deadbeat disc jockey father.  So, she and her son move in with her parents.  Fortunately for J.R., Grandpa’s house is always overflowing with other family members, friends, and hangers-on.  In his adult voice-over, J.R. states that he likes being around people.

One of those people is Dorothy’s brother Charlie, played by a boyish-looking Ben Affleck – who hasn’t appeared this young since “Good Will Hunting.”  J.R. says everyone needs an Uncle Charlie – and by that, we take him to mean everyone needs a father figure.  Uncle Charlie runs a local tavern known as “The Dickens,” named after famed British novelist Charles Dickens.  While most of The Dickens’ patrons probably can’t name a single Dickens novel (nor do they care), Uncle Charlie is very well-read.

In fact, it is Charlie who discovers young J.R.’s intelligence, and guides him to a scholarly course of life.  J.R.’s mother prefers that he study law, but Charlie believes J.R. has a future as a writer.  Encouraging him to read every book he can get his hands on, Charlie assumes the role of the adult male influence in J.R.’s life.

In similar stories, the adult male replacing the absent biological father is often one with whom Mom does not want her son to associate – such as Mark Ruffalo’s character in “You Can Count on Me” or Casey Affleck’s character in “Manchester by the Sea” – both Kenneth Lonergan films, but that’s another story for another day.

But in “The Tender Bar,” Uncle Charlie is very much a good-hearted soul.  He smokes, curses, and possesses a mildly advanced temper.  But he’s exactly what J.R. needs in his life.  And Affleck turns in his best performance since “Argo.”  Television actress Lily Rabe aptly plays J.R.’s mother.  But veteran character actor Christopher Lloyd is somewhat wasted in the role of J.R.’s supportive but moderately demented grandfather.

Nothing funny to say

I don’t know whether to fault Moehringer or screenwriter William Monahan, who adapted Moehringer’s work.  But Grandpa simply isn’t given any funny lines, although the makings of a humorous character are here.  If Neil Simon could have risen from the dead to provide something witty for him to say, Lloyd’s Grandpa could have provided the comic relief this picture needs.

When J.R. goes to Yale, we meet his freshman year roommates and his first college girlfriend.  But these characters aren’t particularly fleshed out either.  The relationship between J.R. and his Uncle Charlie remains the crux of “The Tender Bar,” and that connection could have been explored a little more deeply throughout.  J.R. likes people, and so does his uncle.  From boyhood on, J.R. keeps coming back to his uncle’s bar to recharge his proverbial batteries.

Why should we care?

As with any biographical account, it is important to ask why a motion picture audience would care about the story, and though the performances are basically strong throughout, I can’t help but wonder what I am to take from “The Tender Bar.”  Is it that we all need a family?  A place to call home?  If so, “Cheers” spent eleven television seasons teaching us exactly that.  Is it that we all need a father, or at least a surrogate father?  If so, countless films have educated us about paternal replacements.

I’m thinking Clooney’s intent was no greater than to share an interesting story.  And that is exactly what “The Tender Bar” is.  A damn fine story.  Nothing more; nothing less.  Although it’s being released here at Oscar time, my feeling is that this one will be overlooked in favor of some of the other heavy-hitters of 2021.  There’s nothing inherently wrong with “The Tender Bar.”  (It’s a huge step up from Ron Howard’s 2020 bomb “Hillbilly Elegy” – another story about a lower-class family and the strength derived from those family ties.)  But there’s nothing particularly great about “The Tender Bar” either.  It’s fine.  It’s one to check out when it pops up on Prime Video.  But there are others out there beckoning us to the local cineplex this winter.