I have immensely enjoyed the fact that movies have returned in full force during 2021.  No more “Covid absence” of big, important films.  No more Oscar delays.  Big directors, big stars, and big pictures are back.  And I’ve liked many of this year’s offerings.  But I have yet to be overwhelmed.  I have yet to fall in love with a movie. 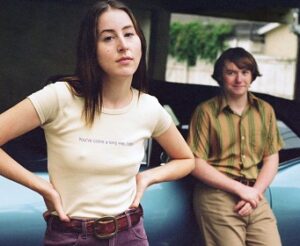 That all changes this weekend.  Paul Thomas Anderson has been responsible for some of the greatest motion pictures of the past quarter-century.  But his work is often heavy and dark.  Think “Magnolia,” “There Will Be Blood,” and “The Master.”  But his latest is a light, fun, sunny romp through Southern California during the summer of 1973 called “Licorice Pizza” – named for a popular west coast record store of the ‘70s.

What makes “Licorice Pizza” so much fun (aside from Anderson’s original screenplay) is the casting.  Newcomers Alana Haim and Cooper Hoffman (son of the late Philip Seymour Hoffman) are so natural in front of the camera, I wonder why we haven’t seen them before.  Having said that, neither possesses classic Hollywood good looks.  And cinematographer Michael Bauman’s camera seems to focus on every imperfection of their young faces.  These lead roles are young people actually played by young people.

Hoffman’s Gary Valentine is a 15-year-old aspiring actor who has already had a supporting role in a motion picture starring a character patterned after Lucille Ball.  Haim’s Alana Kane works for the photography company handling Gary’s school pictures.  Even though Alana is a decade his senior, the ever-confident Gary asks her out for a date.

Their date involves no kissing or even heavy petting.  We realize Anderson’s script is going to take the development of their relationship slowly.  And how refreshing is that?  Not only do these mismatched adolescents not jump into bed immediately, but they don’t jump into bed at all.  Imagine that?  A sex-free love story released in 2021!

As with most friendships, Gary and Alana do go out with others.  But we always believe they have an affinity for each other that remains essentially unspoken.  We feel their connection when either of them is with another – and Bauman’s camera focuses on the other party.  For instance, when Alana accompanies Gary to New York for a talk show appearance with his castmates from the Lucille Ball picture, she goes out with one of Gary’s older co-stars.  As they walk, the camera zeroes in on the couple holding hands, then back to a dejected Gary.  The same occurs later when Alana sees him with another.

Even though he’s only fifteen, Gary has an entrepreneur’s spirit.  He spearheads his own waterbed business that summer, employing his mother, other family members, and many of their friends and acquaintances.  He later expands the business to a pinball emporium.  Although she doesn’t admit it verbally, we know Alana is impressed.  But in another invigorating aspect, we get the idea Gary does none of this to impress Alana.  He’d be a successful businessman with or without her.

The fact that Sean Penn plays a cocksure version of William Holden (named Jack Holden), or that Bradley Cooper plays Hollywood hairdresser and film producer Jon Peters like an absolute jerk, have no real bearing on the success of “Licorice Pizza.”  Had their roles been played by unknowns, Anderson’s film would not have suffered one iota.

The funniest cameo is that of much less well-known character actor John Michael Higgins, who plays Jerry Frick – the man who opened L.A.’s first Japanese restaurant in the 1960s.  During the course of “Licorice Pizza,” his character goes through two Japanese wives who (apparently) speak no English.  Unfortunately, Frick doesn’t speak Japanese, which leads to a couple hilarious scenes. 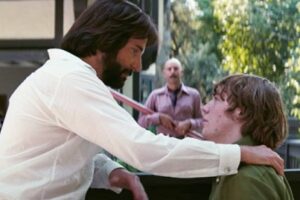 The one false move in “Licorice Pizza” occurs when Gary, Alana, and their friends destroy some of Jon Peters’ personal property – apparently as revenge for his being an imbecile to them when he purchases one of their waterbeds.  It seems out of character for these two leads to respond with such vigor.

There is also one badly misplaced song on the music soundtrack.  Suzy Quatro’s “Stumblin’ In” wasn’t a hit until spring of 1979.  Yet everything else in “Licorice Pizza” places us in 1973 – from “Live and Let Die” on the movie marquee, to President Nixon on the nightly news, to long lines at gas stations.  This may be a minor quibble, but Anderson should have known better.

On the other hand, Anderson totally nails the 1970s look of “Licorice Pizza.”  Not only are the clothes and (mostly) music correct, but the film even looks like it was made in 1973.  The camera work is spot-on for the time period, as Anderson and Bauman concentrate on close-ups, quick zooms, and the occasional lack of establishing shots.  Even introducing characters through glass store windows is a technique first popularized in ‘70s cinema.

And as Anderson is given to “big” (read: unforgettable) scenes – such as the firecracker scene in “Boogie Nights,” the frogs in “Magnolia,” and the bowling alley scene at the end of “There Will Be Blood” – “Licorice Pizza” would not be complete without one.  I guarantee I shall never forget Alana backing down a steep hill after dark in a waterbed delivery truck that had already run out of gas.  It’s reminiscent of Bruce Dern careening down the mountain road in Alfred Hitchcock’s “Family Plot.”  Harrowing.  Unforgettable.  Pure Paul Thomas Anderson.

“Licorice Pizza” is exactly the breath of fresh air needed during this movie season.  And barring some last-minute surprise, this makes (by my count) the fourth year Anderson has given us the year’s best film.  And much as the success of “There Will Be Blood” was due to Daniel Day-Lewis’ riveting performance, or that the success of “The Master” was dependent on the acting talents of Philip Seymour Hoffman and Joaquin Phoenix, these two newbies – Alana Haim and Cooper Hoffman – literally carry “Licorice Pizza.”  I expect each of them to move on to great careers – although I’m not sure either will ever again star in a vehicle this special.

And to top it all off, the final scene will remind older viewers of the end of “The Graduate,” in which Benjamin and Elaine run into each other’s arms – not knowing what their future might hold.  But knowing they want to live through it together.