Stan Carlisle is a drifter – the kind of guy who floats aimlessly from town to town, always trying to pick up a little work before moving on.  We get the sense Stan has some skeletons in his closet.  Don’t we all?  But Stan’s may burn a little deeper than most.  As Stan, Bradley Cooper doesn’t show all his cards at once.  In fact, he doesn’t even speak for the first ten minutes of Guillermo del Toro’s new film “Nightmare Alley” – even though others try to engage with him. 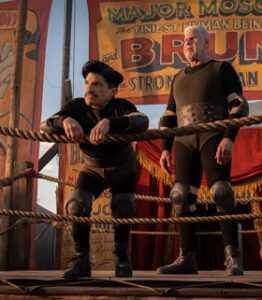 When we first meet Stan, he earns a dollar for helping a circus troupe dismantle their tents and wares, and load up their equipment one night in the pouring rain.  Stan rides with the gang to the next town, hangs around for a couple days, then picks up some circus work offered by the various vendors and carnies.

Keep in mind this isn’t some modern-day Ringling Brothers affair, complete with trained animals and professional announcers.  No, this is the Great Depression, and in the time before television keeps Americans home at night, these carnival barkers entice locals to view the bearded lady, the midget, the strong man, and so forth.  Freaks of nature, they were called.  And Stan finds his circus home with a mentalist couple, played by Toni Collette and David Strathairn.  It’s fun to watch how they perform their act – fooling the masses into thinking Zeena (Collette) has some kind of magic power to read the minds of audience members.

Fascinated with the low-budget traveling circus lifestyle, Stan entices young sideshow performer Molly (an endearing Rooney Mara) to join him in his own mentalist act.  Their routine proves so successful, Stan and Molly leave their circus home for bigger fortune.  This is where “Nightmare Alley” becomes darker and more somber.  The first half of del Toro’s latest feature is a little creepy, but also charming.  We can’t help but not acknowledge the family atmosphere created by this company of societal outcasts.

But del Toro’s and Kim Morgan’s screenplay – based on William Lindsay Gresham’s 1946 novel – never fully recovers from the abrupt change of scenery and atmosphere.  Stan and Molly fine-tune their act, and take it to some of the nicest hotels of the time.  As the U.S. enters World War II, Stan is reading the minds of large crowds in major metropolitan areas.

He meets his match in an equally nefarious psychiatrist named Dr. Lilith Ritter – Cate Blanchett, at her ice-cold best.  Even though we know Stan is a phony, he’s the guy we’re rooting for.  We don’t want him to get in over his head, and at first, he plays Dr. Ritter like a fiddle.  Unfortunately, given the film’s dark tone, we believe we know where this story is headed.  Watching Stan do battle with Dr. Ritter is part of the fun, but by now we’re so far removed from the gentle opening circus sequence, we wonder if “Nightmare Alley” will be worth the payoff.

I’ll stop here, in the name of “spoiler alert,” but suffice to say that arduous and bleak as “Nightmare Alley” becomes, the payoff doesn’t quite measure up to the set-up.  Inevitable comparisons will be made between this film and del Toro’s Oscar-winning 2017 classic “The Shape of Water,” and the similarities are plentiful.  Both take place in bygone times.  Both involve the supernatural – not science fiction, mind you, but strange creatures and marginalized beings.

But “The Shape of Water” had a heart that “Nightmare Alley” lacks.  The tender relationship between Sally Hawkins’ deaf character and the bizarre water beast played well against the evil cruelty of Michael Shannon’s character.  “Nightmare Alley” needs some of that heart.  The love story between Stan and Molly is a good start.  But the screenplay eliminates two years between the time the pair leaves the circus to the time they have established a successful business.  It feels like a scene or two was cut in the editing room that might have been instrumental in helping us feel the love these two principal characters have for one another – and to begin to accentuate Molly’s doubts about Stan’s big plans for their future, which eventually spells his downfall.

“Nightmare Alley” is a very good film.  It’s a fun ride, very well-acted, and never loses its grip on the audience.  But it’s simply not in the same league as “The Shape of Water.”  It would be an outstanding directorial debut.  But we’ve come to expect a little more from del Toro.  I can’t wait to see what else he has up his sleeve in the years to come.