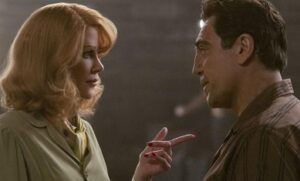 Aaron Sorkin would seem an interesting choice to direct “Being the Ricardos” – a biopic about Lucille Ball and Desi Arnaz during their time making television’s first big “superhit” sitcom, “I Love Lucy.”  Sorkin succeeds in telling stories most of us don’t know.  Think “Molly’s Game,” his brilliant rags-to-riches-to-rags story of former Olympic downhill skier Molly Bloom, who later operated a celebrity-ridden high-stakes poker empire in Hollywood.

Even last year’s “Trial of the Chicago 7” told a story most people alive today don’t know, and others have long since forgotten.  But who doesn’t know about the Ricardos?  Heck, Lucy and Desi were so famous most people simply referred to them by their first names only – even years after “I Love Lucy” was no longer on the air.

What we know going in

We know CBS executives were apprehensive about using a Latino actor in a leading role.  We also know that Lucy was the first television performer whose pregnancy was written into her character so she could continue to perform weekly throughout her parturiency.  For that matter, most of us know CBS wouldn’t even allow the word “pregnant” on the air.  We know Desi cheated on Lucy, which eventually led to the collapse of their marriage.

But how many of us know the House Un-American Activities Committee accused Lucy of being a communist?  Or that Desi used his powerful connections to “rescue” Lucy from the bad press surrounding such allegation?  Or that these three potential trainwrecks (the pregnancy, the extramarital affair, and the communist association) occurred the same week?  And that the cast and writers still managed to churn out a show that week?

Leave it Sorkin (who wrote the original screenplay) to sort out all these script points, jump back and forth in time, and still produce a very coherent film.  “Being the Ricardos” is one of this year’s treats.  And while I give Sorkin most of the credit, the acting (much as it was in “Molly’s Game”) is top-notch.

Be honest.  When you first heard Nicole Kidman would play Lucille Ball, you thought that was a casting nightmare waiting to happen.  Kidman doesn’t even carry herself like Lucy, let alone speak (or whine) the same way.  Yet somehow she succeeds.  First, we need to understand that the character of Lucy Ricardo was an exaggeration of Lucille Ball’s actual personality.  Lucy didn’t act like her television personification until the cameras rolled.

Second, we must understand that Lucille Ball was brilliant.  She was TV’s first lead female performer for a reason.  She was very smart.  Her comedic timing was so sharp, she was able to discern that a joke would not work properly during the first script read-through at the beginning of the week.  And she was instantly able to advise her writers how to fix it.

Because of this (her smarts and her willingness to tell the sometimes difficult truth to her writing staff and fellow performers), Lucy had a reputation as difficult and bossy.  Kidman portrays Lucy as both difficult and bossy, but she lets us see her soft side.  It’s a delicate role to play, and Kidman threads the proverbial needle deftly.  Too controlling and we don’t like her; too sweet and we don’t understand why the rest of the staff acquiesced to her demands.

Likewise, Javier Bardem (who often plays the heavy) would seem a curious choice to play the comedic Desi Arnaz.  But Bardem’s performance shows us not only that he can play any role, but that Desi was more introspective than we might have guessed.  Character actress Nina Arianda (“Stan & Ollie”) plays Vivian Vance, and J.K. Simmons is hilarious as the (apparently) hard-drinking William Frawley.  But Frawley turns out to be more introspective than first meets the eye.  In fact, Sorkin presents Vance and Frawley as close friends and confidants to Lucy.  Of those who play the writing and production staff of “I Love Lucy,” Alia Shawkat stands out as Madeline Pugh, a staff writer who also served as a personal advisor to Lucy.

As Sorkin’s screenplay guides us through this tumultuous week of rehearsals and outside scandals, he peppers the script with a generous helping of flashbacks, where we learn how Lucy and Desi met, fell in love, and landed their hit TV show.  That’s a lot of balls to juggle, but Sorkin is a pro at this.  Prior to his directing career, he was a playwright and screenwriter – particularly adept at biopics, which has now become his forte as a director.

Another of the year’s best

Perhaps it is because I had reservations about “Being the Ricardos” that I liked it so well.  But following a second viewing, I believe it ranks as one of the year’s best films.  And “Being the Ricardos” never becomes complacent.  Sorkin’s films grab our attention and never let go of their grip.  This one is no exception.