Often the best motion picture musicals are those written directly for the big screen.  Think “Singin’ in the Rain” (in which Donald O’Connor dances up the walls) or “Mary Poppins,” in which Julie Andrews and Dick Van Dyke sing and dance with cartoon characters.  Film is an art form all to itself, so why not use it in accordance with the  musical structure?  Conversely, Broadway musicals – made for stage sets – don’t often translate well to the big screen.  They often come off as filmed stage productions.

There are exceptions, of course.  “My Fair Lady” and “Oliver” were excellent motion picture adaptations of Broadway hits.  The best is perhaps Robert Wise’s 1961 version of Jerome Robbins’ hit musical “West Side Story.”  It won the Best Picture Oscar for that year, and deservedly so.  It was a hard-hitting re-working effort, that moved the action off the stage set and onto the gritty streets of New York. 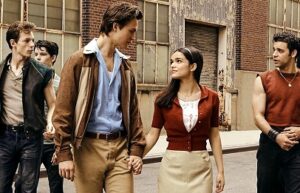 In fact, “West Side Story” was so good it almost defies any attempts to remake it.  Why would anyone, even Steven Spielberg, feel the need to take another crack at “West Side Story?”  But that’s exactly what Spielberg has done.  And much as I still believe the 2021 version is completely unnecessary, I’ll have to admit it is very, very good.

Spielberg has updated (read: coarsened) the language a little, “sharpened” the violence, and made the gang members a little tougher, while still keeping true to the source material.  This is a “West Side Story” for the new millennium.  Not that there was anything wrong with the Wise adaptation; but this one is strong as well.

Fortunately for Spielberg, “West Side Story” is one of the greatest musicals of all time.  The stars aligned for choreographer Jerome Robbins when he brought his musical concept to Broadway in 1957.  It was based loosely on Shakespeare’s “Romeo and Juliet,” and featured musical numbers by Leonard Bernstein and a young lyricist by the name of Stephen Sondheim.

Sondheim, who just died a month ago, was a brilliant Broadway wordsmith, but the knock against him was that he always struggled with melodies.  Think about “Into the Woods.”  It’s one of the most enjoyable stage musicals ever, but I challenge you to sing one song from it.  For that matter, I challenge you to recall any Sondheim song (save for “Send in the Clowns”) for which he wrote the lyrics and the melody.

But for “West Side Story,” the great conductor and composer Leonard Bernstein wrote the music.  Coupled with Sondheim’s libretto, “West Side Story” ranks with “Fiddler on the Roof” as one of those musicals in which every single song is memorable.  Heck, Spielberg’s task was easy, considering his source material – “Tonight,” “Maria,” “I Feel Pretty,” “One Hand, One Heart” and “Cool” are some of the most defining songs in Broadway history.

And what Spielberg does with “Mambo” and “America” is create bring-the-house-down musical numbers, thanks to his use of Robbins’ original choreography, and his ability to take the dance numbers off the stage and place them on the streets of 1950s New York.  Of course, these were bring-the-house-down musical numbers in the 1961 adaptation too; but Spielberg has modernized their look. 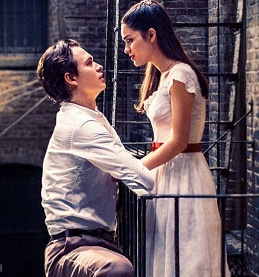 He’s also used actual Puerto Rican actors (or at least Hispanic actors) to play the Sharks gang.  Wise used Natalie Wood for the female lead, even though she was not Latina, nor could she sing.  She was famously dubbed by Marni Nixon.  Spielberg uses newcomer Rachel Zegler in the role of Maria.  Zegler has a beautiful soprano voice, although she is of Columbian and Polish descent – so, again, not Puerto Rican.

For Tony, the male lead, Spielberg uses Ansel Eglort from “The Fault in our Stars.”  And in a wonderful turn of events, Rita Moreno has a supporting role in this version.  At age 90, it’s obviously not the same singing and dancing role that won her a Best Supporting Actress Oscar in 1961, but it’s always great to see Broadway and film royalty come full circle.

The only other recognizable name in the cast is that of stage and film character actor Brian d’Arcy James, who plays Officer Krupke.  And in a delightful precinct house song and dance number, “Gee, Officer Krupke” continues to rank as my favorite song in the entire show – although admittedly “Somewhere” is the best.

After more than six decades, “West Side Story” is still one of the greatest American musicals of all time.  And it takes its place as one of the few very great film adaptations of a Broadway musical.  At first, I wondered why anyone – even Steven Spielberg – would want to remake it.  But now I realize that Spielberg’s intent may be nothing deeper than introducing a new generation to this important and celebrated show.  The fact that he succeeds so well means his goal is accomplished.