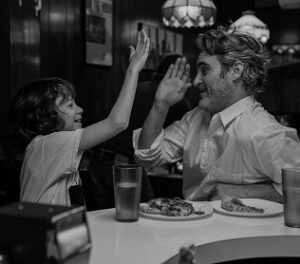 Johnny is a documentary journalist, involved in a project in which he and his co-workers interview elementary and middle-school children about how they view the future – their own, and that of the world.  Amidst his tight schedule, Johnny’s sister Viv contacts him with a request to watch her son Jesse for a few days while she travels to Oakland to visit her estranged husband, Paul.  Paul is experiencing some mental and emotional issues, that are responsible for the couple’s disaffection.  Viv’s goal is to impress upon Paul the need to seek professional treatment.

So Johnny, who has never been a father, is left alone in Los Angeles to care for an intelligent, inquisitive, and occasionally odd nine-year old boy.  Now before you can say, “I know where this is going,” you do not.  This is not some cutesy Neil Simon screenplay, in which the kid spouts clever one-liners until he bonds with his inept uncle.  No, Mike Mills’ “C’mon C’mon” is far deeper than we might expect.  And Jesse’s part is written exactly spot-on.

Sometimes, he’ll pipe up with analytical questions in the middle of Johnny’s reading him a bedtime story.  He’ll pry just enough that Johnny must put the book down and have an adult discussion with him about a serious matter – such as why Johnny is not married, or what exactly is going on with Jesse’s father.  Other times, he’ll specifically ask to be read a bedtime story.  In other words, he’s a typical nine-year-old – wavering between child and teenager sometimes as quickly as the wind changes direction. 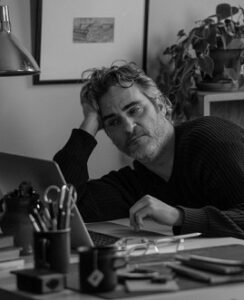 Anchoring Mills’ original screenplay is accomplished actor Joaquin Phoenix as Johnny, a man who doesn’t fit the stereotype any more than Jesse.  Johnny is not some slob who has no clue how to handle a child.  He actually does a remarkable job, considering he has no children of his own.  Johnny’s career (or at least his current project) is dedicated to interviewing children – including always having a quick follow-up question.  In fact, these work interviews of Johnny’s are ingeniously woven into the narrative to break up the time he spends with Jesse.

Not a stereotypical cliche

But as such, Johnny is adept at “interviewing” Jesse, including having the quick follow-up question.  Therefore, we mercifully bypass the archetypal baffled uncle, and move straight to the bonding phase.  Almost nothing about “C’mon C’mon” plays into the boilerplate pattern we might expect from such a plot set-up – save for a couple scenes in which Johnny loses sight of Jesse in public crowds.  And even these scenes spare us the overwrought drama of Jeff Bridges’ losing his girlfriend’s son in “Crazy Heart.”

But the real stars here are writer-director Mills, who adroitly steers the material away from the obvious, and cinematographer Robbie Ryan, who bathes bright, sunny Los Angeles, and tough, dirty New York in beautiful shades of black and white.  This might seem an ironic choice for a film which also takes us to Detroit and New Orleans, by way of Johnny’s work.  Why not show these wildly divergent American cities in their natural beauty – or lack thereof?

But that’s exactly what Ryan and Mills do.  By “coloring their pallet” in black and white, we are required to use a little imagination to fill in the proverbial blanks of the various settings.  This filming choice is reminiscent of early television, in which a character might describe his shirt as green, but viewers were required to use a little ingenuity to conceptualize the shirt as green – rather than just another shade of black or grey.

Seen through a child’s eyes

Here, sunny Los Angeles seems subdued, yet gritty New York doesn’t seem as unwelcoming as we might expect.  As seen through a child’s eyes, the differences in setting are perhaps not as pronounced as might be expected from a jaded adult’s perspective.  If “C’mon C’mon” merits a sequel featuring Jesse as an adult, it might be shot in color.

Too long, but a strong film

Mills is the director who brought us the overrated 2016 comedy “20th Century Women.”  Here, he masters his craft better than he has before.  My only complaint is that “C’mon C’mon” lasts about a half a reel too long.  If Mills could have tidied up his screenplay by eliminating ten to fifteen minutes of uncle-nephew dialogue in the final act, “C’mon C’mon” might rank as one of the year’s top pictures.  It’s still very good, and I’m happy to say it’s worth a view.