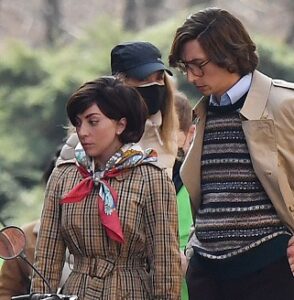 Much as with Pablo Larrain’s new Princess Diana flick “Spencer,” the problem with Ridley Scott’s “House of Gucci” is going to be more with the expectation than in the actual execution of the material.  “House of Gucci” is not a brilliant Scorsese-esque rags-to-riches-to-rags saga, with a grand narrative arc, and Oscar-worthy performances.  No, “House of Gucci” is pure soap opera – on an ambitious scale, mind you, but a soap opera nonetheless.  It is perhaps fitting that the source material inspires such an approach.

Ambitious and resourceful Patrizia Reggiani falls hard for young law student Maurizio Gucci – unaware he has any relation to the famous Italian fashion family.  In fact, Maurizio is dead-set against following in the family business.  These early scenes of budding romance are the film’s most endearing.  As Patrizia, Lady Gaga excels in her first non-singing role.  Unfortunately, the subdued Adam Driver has trouble maintaining what passes for his Italian accent throughout the proceedings.  For that matter, enough of the accents border on downright annoying I wonder why Scott didn’t simply scrap them entirely.

Maurizio’s father Rodolpho (a steely, ice-cold Jeremy Irons) dismisses Patrizia immediately, as her family business is in the transportation industry.  “They’re nothing more than truck drivers,” he ridicules.  He won’t even attend their wedding.  But he does welcome Maurizio into the house of Gucci when he’s good and ready – i.e. at Patrizia’s prodding.  Rodolpho’s brother Aldo (Al Pacino, playing Al Pacino) is more taken by Maurizio’s ability and promise – not to mention smitten by Patrizia.

Once she’s staked out the family dynamics, the energetic and determined Patrizia goes to work pitting various family members against one another until Maurizio climbs the corporate ladder to the top of the Gucci empire.  Unfortunately, wealth and fame do not buy happiness, and it’s distressing to witness the toll they take on Maurizio.  The change in his character is the result of Patrizia’s meddling; unfortunately, neither one is able to grasp this concept.

Becky Johnston and Roberto Bentivegna adapted the screenplay from Sara Gay Forden’s 2001 book, “House of Gucci: A Sensational Story of Murder, Madness, Glamour, and Greed.”  But it doesn’t quite live up to the over-the-top nature of the source material.  Of the primary players, only Gaga’s performance is cranked up the extra notch required for us to believe anything we’re watching is true. 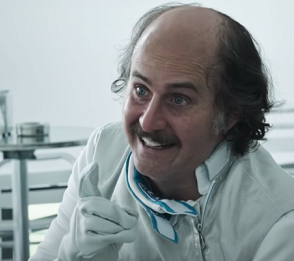 In a fantastic supporting performance, an almost unrecognizable Jared Leto plays Aldo’s “idiot” son Paolo – an incompetent designer who would do anything for a piece of the proverbial Gucci pie.  Leto’s accent is spot-on, and his presentation is practically a caricature of the eccentric Gucci family.  I’ve read where some viewers feel as though Leto’s performance belongs in another movie – that his character doesn’t really fit in “House of Gucci.”  I agree, but with this caveat:  Leto’s performance is exactly what this film requires.  The material is so over-the-top (even though it is true) that the actors should have played it off-the-charts hysterical.

Should have gone over-the-top

This is the type of film where the actors need to go for broke.  Think “Network” or “Dog Day Afternoon.”  Instead, the cast, save for Leto, is too subdued.  This is a seedy story of a family taken down by a conniving outsider.  Lady Gaga practically exudes Joan Collins here.  Scott should have taken a cue from Sidney Lumet (director of both “Network” and “Dog Day Afternoon”) and instructed them to go for broke – play everything over the top.  Then, “House of Gucci” might have been a masterpiece.

Furthermore, there are a couple egregious continuity errors in “House of Gucci.”  After first meeting Uncle Aldo, Patrizia (and by extension Maurizio) is invited to Aldo’s 70th birthday party.  The next scene features the extended family celebrating Aldo’s life at a lakeside estate in Italy.  Two scenes later, we see Aldo blow out 70 candles on a large cake with the family gathered around – in an entirely different setting.  Did someone flub an editing cue?  And why didn’t Scott catch it?

Also, it becomes increasingly difficult to determine which of the action occurs in New York and which occurs in Italy.  In a way, this matters less as the story progresses, but it would be informative to know which hemisphere we’re in.  And the music is all over the place.  The early Donna Summer disco songs give way to ’80s music from Eurythmics and the Thompson Twins, only to go back and pick up Blondie’s 1979 hit “Heart of Glass” toward the end of the film.  If the music is to help determine a sense of time and place, it backfires here.

Again, keep your expectations low.  “House of Gucci” is nothing more than a glorified soap opera.  But let Jared Leto’s performance soak in.  Treasure it; for he vividly demonstrates the absurd glory this film could have been.