Italian director Paolo Sorrentino has a film coming out soon called “The Hand of God,” an autobiographical portrait of a pubescent teen who wants to be a motion picture director.  British filmmaker Kenneth Branagh has created a similar coming-of-age tale with his latest offering, “Belfast,” which recounts his own childhood in Northern Ireland. 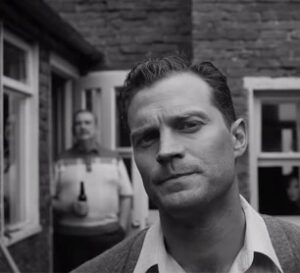 “Belfast” is a heartwarming and life-affirming picture, which focuses on some of the familiar rites of passage for a nine-year-old boy – his schoolwork, his friends, the girl he’d like to get to know better, and the rush of running with the wrong crowd.  But Branagh’s original screenplay is set against the backdrop of the violent Protestant/Catholic clashes which began in earnest during the summer of 1969.

Newcomer Jude Hill is astonishing as young Branagh – named “Buddy” in this film.  Hill has the task of carrying a major motion picture at a very young age.  It’s been done before, obviously.  Think Tatum O’Neal in “Paper Moon” or Jacob Tremblay in “Room.”  While Hill’s performance isn’t quite in that league, he pushes all the right buttons in the appropriate places.

Irish actors Jamie Dornan and Caitriona Balfe play Buddy’s parents, referred to simply as “Ma” and “Pa.”  They are a typical working-class family who struggle to pay the bills, their insurance, and a sizable sum of back taxes.  Also living under their roof are Pa’s parents, Granny and Pop, played by Judi Dench and Ciaran Hinds.  While all the actors are excellent, and each have scenes in which to shine, Dench and Hinds stand out – albeit perhaps because the grandparents are not relegated to small supporting roles in “Belfast.”  They are major characters who share a significant role in young Buddy’s upbringing.

Buddy’s dad is a joiner – an advanced woodworker who leaves the family home to work on large construction projects in England.  Buddy sees his father only every other weekend, as family funds do not allow for Pa to return weekly.  Still, Buddy’s relationship with his father is solid, and Pa’s influence on Buddy is consequential.

It’s Buddy’s mother who has the task of overseeing the day-to-day lives of Buddy and his older brother – a minor character who doesn’t have much to do with the proceedings.  As Ma, Balfe lifts the role above our expectation.  She’s firm but lovable.  And she, Granny, and Pop keep Buddy firmly grounded.

Having said that, Buddy is asked to join a “gang” by an older girl from the neighborhood.  At first, her request seems innocuous enough, but later we learn she is involved in the revolution – on the side of the Protestants.

While Buddy’s family is protestant, he has his eye on Catherine, the smartest girl in his fourth-grade class.  She happens to be Catholic.  And while the clashes continue uncomfortably close outside, Buddy is raised in an environment in which labels and divisions are discouraged.  In that respect, “Belfast” takes on an increased sense of importance, in this day and age of divisions over everything from religion to race.

The flip side of this relevance of equality is that most of the excellent music in “Belfast” is provided by legendary Irish musician Van Morrison.  However, I wonder if Branagh might have re-thought that selection had he made “Belfast” after Morrison’s recent unfortunate comments discouraging Covid-19 vaccinations?  Still, the music is powerful and uplifting, and is often used in conjunction with the family’s most happy times.

Aside from the typical adventures of a young boy, Buddy’s most relevant interest would appear to be that of film – as we might expect, knowing the autobiographical nature of Branagh’s picture.  While Buddy is a social child, he never misses an opportunity to watch an American Western on his family’s black-and-white television set, and one of his greatest joys occurs when Pa takes the family to the local theatre to see Dick Van Dyke is “Chitty Chitty Bang Bang.”

As the religious street warfare increases, Ma and Pa begin to have serious discussions about moving to England.  Of course, Buddy and his brother are against a major family move.  The only life they know is right there in their own little corner of the big city of Belfast, and they have no desire to start over.

There are some heart-wrenching scenes, but “Belfast” is primarily an enjoyable family film with a certain amount of social and historical relevance.  In this sense, it is reminiscent of John Boorman’s 1987 classic “Hope and Glory,” in which a British family experiences World War II through the eyes of a young boy (presumably Boorman himself).

“Belfast” doesn’t dwell on the background behind the religious clash.  Nor are we ever entirely clear on the Pa’s financial dealings.  But “Belfast” is told through Buddy’s eyes.  While this narrative choice may muffle our sense of understanding every detail, it endears us to the material in a way a straight-ahead, all-knowing, outside narration would not.  “Belfast” is a joy, and it’s one families with middle-school or older children could see together.