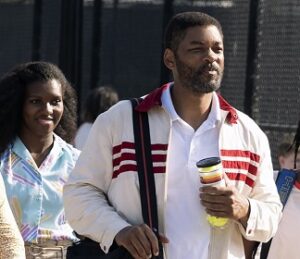 Reinaldo Marcus Green’s “King Richard” is not some historic period piece about a British king.  No, this is the biopic about Richard Williams, the strict and demanding, yet loving and supportive father of tennis superstars Venus and Serena Williams.  “King Richard” stars the versatile Will Smith in the title role of a man who expects much from his five daughters, as he tries desperately to shield them from the more harsh aspects of growing up in a ghetto neighborhood in Compton, California.

Helping Richard in his child-rearing is his loving and supportive wife Brandy, played by character actress Aunjanue Ellis, who has appeared in “Ray” and “The Help.”  Ellis plays the girls’ mother as a co-parent who’s not afraid to stand up to the domineering Richard when she believes he’s crossed the line.

And crossing the line is what keeps “King Richard” from falling into the trappings of a cliché sports movie.  From the early scenes, we see Richard in complete control of his family.  He guides his girls through every aspect of every day – driving Venus and Serena to the local park to practice their tennis, working with all five of them on their homework, and even sending them to bed at what he believes to be the exact right time.

You see, Richard has a plan for each of these girls’ lives.  And the plan for Venus and Serena is for them to become the greatest tennis players in the world.  But how can this goal be accomplished, given the Williams family’s limited resources?  The girls can’t practice at an expensive country club.  They can’t train with the greatest coaches the world has to offer.  Some days, it’s all Richard can do to keep the neighborhood gang bangers away from his daughters.  In fact, Richard takes a few punches in their defense.  But as one might expect from a Will Smith film, the level of violence is relatively low, and the street language subdued, making “King Richard” a film which families with aspiring teens can watch together.

Richard’s life plan for Venus and Serena leads him to pursue some of the greatest tennis trainers in California – most of whom give him the proverbial cold shoulder.  And while the racism is toned down throughout, one coach asks Richard if he’s thought about basketball rather than tennis.  Eventually, Richard lands the girls an audience with Pete Sampras’ trainer, Paul Cohen.  Played by Tony Goldwyn, Cohen is so impressed he agrees to train Venus for free.  Since he won’t also take Serena, Richard films each training session to use with Serena after Venus’ practice sessions.

Unfortunately, Richard has a habit of interfering with coaches who have spent their professional careers teaching tennis.  His constant arguing doesn’t sit well with Cohen, but Venus is so good, the sessions continue.  Venus, and eventually Serena, first makes a name for herself in the local teen tennis tournament circuit, easily defeating girls of much higher tennis pedigree.

As Venus approaches high school, Richard succeeds in setting her up with championship trainer Rick Macci (played by character actor John Bernthal), who moves the Williams family cross-country to his training compound in Florida.  His belief in Venus is so strong that his fee to Richard and Brandy is 15% of all future earnings, but nothing up front.  Again, Macci must deal with Richard’s co-coaching – not only of Venus’ tennis sessions, but of her life.  Unlike everyone else Macci has ever mentored (including Jennifer Capriati), Venus does not join the tournament circuit, thanks to her father’s decision; it simply isn’t part of his plan. 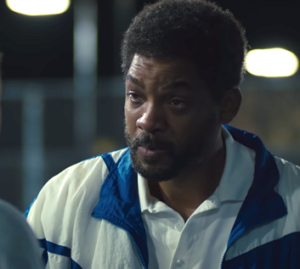 Smith plays the role to perfection.  Richard is mostly likeable, and the goals he sets for his daughters are certainly commendable.  But he can be his own worst enemy.  In this respect, Richard Williams is not the typical Will Smith character; this one comes with flaws.

As Brandy, Aunjanue Ellis gives the best performance yet in her career.  While some of her reprimanding of Richard gives into sports movie speechifying, she does have a couple great scenes – including one where she calls out her neighbor in Compton for meddling in her family’s affairs.

Saniyya Sidney and Demi Singleton play Venus and Serena, respectfully.  Sidney, who has more screen time, conveys Venus’ noteworthy charm and respect for her competitors – always showing her trademark smile, and showing grace to those she defeats.

Unlike some sports films, “King Richard” doesn’t necessarily end on a high note.  But it is at the end of Zach Baylin’s original screenplay that we see the impact Venus (and later Serena) would have on a generation of young African American girls who might have had an interest in tennis, but no role models to pave the way.  It’s no stretch to say the Williams sisters did for tennis what Tiger Woods did for golf.  And in this respect, perhaps more so than any other, “King Richard” succeeds.