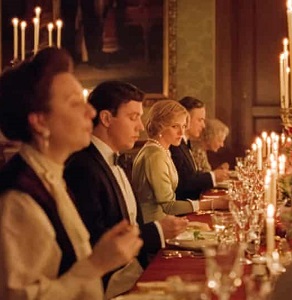 Those who see Pablo Larrain’s new film “Spencer” expecting a triumphant biopic of Princess Diana, accentuating her charitable works and her celebratory independence from the British royal family, will be disappointed.  “Spencer” is not a biopic, but rather a small snapshot of a specific moment in time (Christmas, 1991, to be exact) in which a vacillating Diana ponders life outside the confines of the expectations of her position.

This Diana, played by Kristen Stewart, is confused and uncertain about her future.  She loves her boys (ages 9 and 7 at the time); she has returned for the royal family’s annual Christmas festivities to announce her divorce from Prince Charles, and that she is taking the boys to live with her in London.  At this time, Charles was actively engaged in an extramarital affair with Camila Parker Bowles.  It was a particularly low time in Queen Elizabeth II’s reign, and consequently, there isn’t much to celebrate in “Spencer.”

In fact, once Diana arrives at the Sandringham Estate in Norfolk (which is ironically located within a mile of the Spencer home, where Diana spent her childhood), we get the sense a major flashback is coming – one which would cover the early dating years of Charles and Diana, their fairytale wedding, and their child-rearing years.  But Larrain never takes us there, preferring to accentuate Diana difficult decision to leave not only her cheating husband, but the detaining boundaries of her role as Princess of Wales.

Acknowledging the premise of the film allows us to see it for what it is – a moving examination of the mental state of the princess, as she wrestles with her feelings regarding the royal family versus her need to exert her autonomy from them.  Larrain employs occasional dream sequences, in which Diana equates her situation with that of Anne Boleyn, second wife of Henry VIII who was beheaded for having an affair – when it was actually the king who had an affair while married to Boleyn.  The similarities between Diana and Boleyn are striking enough on paper; they are magnified here.

Diana confides in her royal dresser Maggie, played by the great Sally Hawkins.  Before the annual Christmas Eve dinner, Maggie encourages Diana to exercise her independence, only to find herself mysteriously absent from the castle the following day.  As you might expect, the head of the estate staff is a tight-lipped upper-crust curmudgeon who somehow knows everything that happens in the estate – down to the last piece of furniture which might appear slightly out of place.  His name is Major Alistair Gregory, and he’s aptly played by Timothy Spall.  Diana and the major never have the big confrontation we fear might be coming, but suffice to say he makes her uncomfortable throughout. 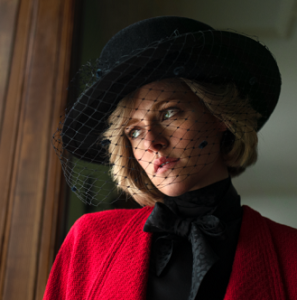 As Diana grapples with her circumstances, we are privy to her happiness only when she is in the company of her sons.  The majority of “Spencer” is a downer.  And this is where Kristen Stewart shines.  She makes us care about Diana within the realm of Steven Knight’s restraining screenplay.  It’s hard to like someone who isn’t given any uplifting scenes until the end of the film.  It’s easy to view her as a spoiled brat.  “How could she not know what she was getting into when she accepted the prince’s hand in marriage?”, we think.

But Stewart’s proficient performance anchors “Spencer” in a way we’re not accustomed to.  She plays Diana exactly as we remember, and then cranks it up about one notch.  In other words, Stewart’s Diana is just enough off-kilter that we completely accept the wonderful dream sequence which occurs during Christmas dinner.

Opting to skip the proceedings (a big no-no in the royal world) in favor of a late-night trek to her long abandoned family home, Diana stands at the top of the dilapidated staircase contemplating suicide, when she reflects on her cheerful adolescence, and her upcoming solo life with William and Harry.  This is the climactic scene in a film which only becomes joyful after Diana announces her decision to Charles.

It’s easier to accept “Spencer” for what it is when we recall that Pablo Larrain also made the 2016 film “Jackie,” another snapshot of a specific moment in time during which an important female pondered life outside the expectations of her position.  “Jackie” starred Natalie Portman as Jacqueline Kennedy during the days immediately following her husband’s assassination.  Much as in “Spencer,” Larrain deftly threaded the proverbial needle between sympathy for his subject versus overindulgence.  We sympathized with the unenviable hand the first lady had been dealt, while at the same time questioning the fact that she surely knew what was expected of her during this trying time.

Meaning of the title

“Spencer” is more a flight of fancy than “Jackie,” but the similarities are striking.  And the film’s name makes perfect sense when we understand where Larrain and Knight are coming from.  Had they titled their work “Diana,” a cheerful biopic would have been the expectation.  “Spencer” accentuates Diana’s upbringing – her past life, her childhood.  That’s what was sorely missing from her life as a royal.  And that’s what she reclaimed during Christmas of 1991.