The Harder They Fall

In 1969, Sam Peckinpah introduced moviegoers to the violent Western.  “The Wild Bunch” featured more bloodshed than we had ever seen; it redefined the Western – into a grittier, more hard-boiled version of its former wistful interpretation.  Gone were the happy yet determined pioneer families of the 1940s and ‘50s.  The protagonists of “The Wild Bunch” were callous, unsympathetic real men.  And their world was populated with every miscreant and degenerate on the plains.  The world was changing – in popular culture, in life, and even at the movies.

Fast-forward to 2021.  A half-century after Peckinpah reinvented the genre, Westerns today are all a little rougher and more abrasive than those of bygone times.  And while films like “3:10 to Yuma” and “Wind River” don’t feature the outright bloodletting of “The Wild Bunch,” the guns seem to have more firepower, the outlaws are a little more ruthless, and the high plains are a little more immoral than in the typical John Wayne movie.  I’m not necessarily saying this a negative development; but it is an obvious trend.

Now, music producer and songwriter Jeymes Samuel has directed his first full-length feature film, “The Harder They Fall,” which features violence so over-the-top it makes Peckinpah’s carnage seem mild.  Samuel has infused the classic Western with the extreme ultra-violence of Quentin Tarantino.  And the end result is an assault to the senses which leaves the viewer physically and mentally drained after over two hours.  We find ourselves begging for just one quiet, thoughtful moment before the next bloodbath in the next town.  But alas, the jacked-up gunfire and cold-blooded fisticuffs just keep coming.

“The Harder They Fall” opens with the brutal killing of a pastor and his wife in front of the couple’s impressionable ten-year-old son.  And it doesn’t let up until the son exacts revenge upon the outlaw who changed his life forever.  Unfortunately, we are never privy to the next chapter in the young boy’s life.  We instantly warp speed to his adulthood where he, known at Nat Love, leads a gang of thugs and outlaws which seem to have more in common with a modern-day street gang than with those of the Old West.

The archenemy of Love’s gang is an even more brutal bunch, headed by one Rufus Buck, a character who has no discernable positive qualities whatsoever.  Yes, the characters played by William Holden and Ernest Borgnine in “The Wild Bunch” were criminals.  They held up banks, robbed trains, and killed when they had to.  But they were somehow heroic.  They stuck together through thick and thin – a band of brothers fighting their way through Peckinpah’s heartless and indifferent world.

Buck and his gang possess none of these attributes.  They exist merely to be bad – to be nothing more than the antithesis to our somewhat more gallant gang.  Buck’s group is simply a function of plot for Samuel and fellow screenwriter Boaz Yakin.  A rival gang was required as a plot device; so, Buck’s group was created to fill this need.  But we know nothing about them.  Why are they bad?  What drives this group to inflict torture on innocent townspeople wherever they go? 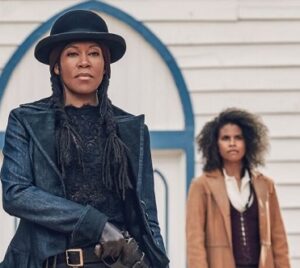 Furthermore, “The Harder They Fall” is simply too “modern.”  The language sounds like it’s right off the streets of John Singleton’s “Boyz n the Hood.”  The hairstyles look like they came out of a rap music video.  And in fact, the soundtrack even features a couple rap songs.  Now, I had a bit of a problem with a Bryan Adams song stuck in the middle of the Kevin Costner vehicle “Robin Hood: Prince of Thieves.”  But a rap song in a Western?  If Samuel can’t take his material any more seriously than this, why should we?  When Jamie Foxx donned a pair of sunglasses in Tarantino’s “Django Unchained,” we smirked.  Sunglasses hadn’t even been invented yet, but he looked really cool.  But that was one minor detail in a film which, for the most part, got its history correct.  This one does not.

I love the idea of a Black Western.  There were African Americans in the Wild West, and why not feature them in a motion picture?  But Samuel needs to take his subjects more earnestly.  “The Harder They Fall” is not a comedy.  Had it been, some of these continuity errors could have been forgiven.  But this is serious, heady stuff.  That it needs to fit within its time frame is practically required.

The cast is fine.  Jonathan Majors (“The Last Black Man in San Francisco”) plays Nat Love.  As the role requires, Idris Elba is ferocious as Rufus Buck.  And veteran character actor Delroy Lindo plays the U.S. marshal who teams up with Love’s gang to take down Buck’s.  They’re all functionable, but their acting is merely in service of Samuel’s bloodbath of a screenplay.  The real stars are the guns, which seem to resonate for a hundred miles every time they fire.

Not only can I not recommend “The Harder They Fall,” but I can’t think of one redeeming value it possesses.  One day there will be a great Black Western.  Unfortunately, it’s not this one.