Actor Fran Krantz’ directorial debut is “Mass” – essentially a 90-minute conversation in the basement of a small Episcopal church, in which the parents of a high school boy who was murdered clear the air with the parents of the boy who committed the atrocity.  If this sounds heavy, it is.  If this sounds like an unnecessary dissection of American gun laws, it is not.

Krantz’ original screenplay seems as though it is adapted from a stage play.  It is not (although it would work very well on the live stage).  It is a frank discussion, in which four extremely skilled character actors guide us through a thorough analysis of grief, trauma, and buried rage.

Parents of the victim

Jason Isaacs and Martha Plimpton play Jay and Gail, parents of one of the victims of a mass murder which occurred at their son’s high school some time ago.  The exact timing is never mentioned, but we get the sense it happened six or seven years prior.  Their goal would appear to be to glean some kind of a sense that the shooter’s parents, Richard and Linda, missed a warning sign or two – an admission not of guilt, but of different choices that could have been made. 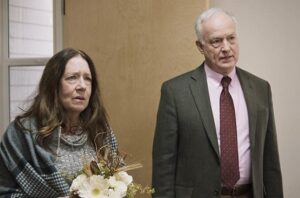 Parents of the perpetrator

As Richard and Linda, Reed Birney and Ann Dowd appear on the defensive almost from the outset.  Again, the admission of guilt is not the issue.  Richard and (especially) Linda recognize the enormous pain their son caused.  They acknowledge he suffered from mental health issues.  Smartly, Krantz’ script doesn’t use mental health as a smoke screen in a discussion of gun rights.

Birney’s Richard is uncomfortable from the moment he sits down.  He verbally runs through a checklist of warning signs that he and Linda misread – complete with excuses as to why these harbingers were ignored or justified.  This attitude doesn’t sit well with Gail.  And Jay comes across as the buffer between Gail and the rest of the world – as though it’s his role to shield her from anything that might cause her buried animosity to overflow.

This is a harrowing discussion, in which layers of buried anger, resentment, apology, and vindication are peeled back, layer by layer.  Is it a “fun” picture to watch?  No.  But it is absolutely brilliant.  Films this direct and unapologetic about its subject matter come along once in a blue moon.

It is reminiscent of Louis Malle’s “My Dinner with Andre,” although less claustrophobic, and the subject matter is constant.  It reminds me more of “Twelve Angry Men,” in which a jury deliberates the fate of a man accused of murder.  Much as Sidney Lumet did in “Twelve Angry Men,” Krantz employs more close-up shots and quick cuts as tensions rise.  Never once do we feel confined or limited by the space.

Save for Birney, each actor is given big screen moments in which to flaunt their acting chops – although Birney’s character simply isn’t given to big moments, so his even-keeled persona seems logical.  It’s difficult to say which character carries the film, and I’m certain that’s by design.  However, it’s hard to deny the onscreen excellence of Martha Plimpton – an actress who rose to prominence as a teen during the 1980’s.  Although she’s kept working during the intervening years, she’s flown under the proverbial radar until now.  I expect to see her name in this year’s Oscar discussion.  Isaacs and Dowd (another actress whose heyday occurred in years past) also have dramatic and touching scenes.

As tensions rise, Linda asks Gail to share a story about their boy.  Perhaps to relieve some tension, her request diffuses Gail’s pent-up anger, and allows us to see a more tender side.  We only wish the request had been countered, but Richard draws the meeting to a close perhaps too soon.  Fortunately, Krantz’ screenplay features a somewhat drawn-out but exceedingly satisfying epilogue.

“Mass” is not a film which can be viewed in the family room while attending to other chores.  This one commands our attention.  And rightfully so.  It’s a painful and blunt discussion, but it’s one I’d like to see again.  I draw great fulfillment from watching very accomplished actors parlay their craft.  And the screenplay is first class.  It is worthy of an Oscar as well.  Unfortunately, “Mass” is likely to fly under the radar during this fall movie season.  And that’s a shame.  This one deserves to be seen.