Tony and Chris are filmmakers who have chosen to retreat for a period of time on Faro Island in the Baltic Sea – the island where famed Swedish director Ingmar Bergman made all his films from 1961’s “Through a Glass Darkly” on.  Their goals are twofold.  Tony, the more famous and well-established of the pair, is there for a couple meet-and-greets, where a couple of his own films will be shown, and fans seek autographs and selfies with him.  Chris, the up-and-coming filmmaker, hopes to stumble upon some divine intervention – perhaps from the ghost of Bergman himself – as she attempts to overcome a case of writer’s block and complete her latest screenplay.

Although Tony and Chris obviously love one another (and have for some time), they prefer to work independently.  Tony prefers writing in the countryside villa they’ve rented, while Chris retreats to the interior of the nearby windmill.  Tony writes feverishly, never at a loss for words or ink drawings of the staging of various scenes.  Chris has a difficult time putting ink to paper.

When the middle-aged couple is not writing, they take in the tourist attractions – almost all of which have something to do with Sweden’s most famous artiste.  Tourists quiz one another on their knowledge of all things Bergman; and his films play frequently at arthouses throughout the island.  While Tony prefers the larger crowds of the tourist-bus nature, Chris spends an afternoon with a young film student who shows her some of the island’s less well-known haunts.  In a Hollywood production, Chris’ afternoon with the student might have ended romantically.  Here, realism rules, and their day concludes with nothing more than a hug. 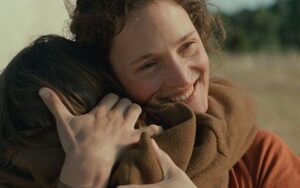 As Tony and Chris, British actor Tim Roth and Luxembourgian actress Vicky Krieps (“Phantom Thread”) are solid and believable, if not flashy.  French director Mia Hansen-Love’s original screenplay ambles along happily yet somewhat aimlessly, until Chris decides to share her latest screenplay with Tony.  Seeking his insight to move her story along to a conclusion, she paraphrases her story to him, as actors perform the story for us on the big screen.  This “play within a play” structure can be tricky, but Hansen-Love handles it seemingly effortlessly, as we have no trouble (at least at first) differentiating between the two storylines.

The film within a film

Ironically, Chris’ script centers around a young woman named Amy – an American filmmaker, no less – who comes to Faro Island to attend the wedding of a close friend.  At the wedding, she reconnects with an old flame named Joseph.  While Amy still harbors feelings for Joseph, he doesn’t seem to be ready to commit, freely commenting on his girlfriend and other current lovers.  Amy and Chris are played by Australian actress Mia Wasikowska and Norwegian actor Anders Danielsen Lie.

Up to this point, nothing in Hansen-Love’s film has played out like anything Ingmar Bergman ever directed.  Nothing about mortality or faith; no overt sexuality; no gimmicky motion picture tricks; no fancy shading or superimposition of characters’ faces.  Other than the location (of either Hansen-Love’s film or Chris’), “Bergman Island” has as little to do with Bergman than almost any other – save for the fact that Hansen-Love’s screenplay name drops every single Bergman classic except “Wild Strawberries.”

But then something happens – very subtly at first, then in a more noticeable fashion.  Some of the characters from Chris’ film appear in real life.  Since the film-within-a-film is not shot any differently than the “real life” scenes (unlike Bergman, who would have at least accented different colors in each narrative), the effect is initially bewildering.  Amy turns out to be either an acquaintance of Tony’s and Chris’, or someone they’ve met on the island.  And there’s even a character in Chris’ film who resembles the young film student who presented the hidden treasures of Faro Island to Chris early in “Bergman Island.”

As the stories begin to blur, Chris and Amy even begin to mirror one another.  With the frequent discussion of various characters’ touting “Persona” as Bergman’s masterpiece (and I agree with them), it isn’t a stretch to see where Hansen-Love derived her own inspiration.  Had Bergman himself directed “Bergman Island,” I would have fully expected to see Krieps’ and Wasikowska’s faces overlapped, a la those of Bibi Andersson and Liv Ullmann in “Persona.”  But again, Hansen-Love isn’t making a Bergman-esque film; she’s making a film inspired by Bergman.  This is clearly her own film.  It meanders about at a deliberate pace, it soaks in the seashore atmosphere, and the end result is we can make of it what we want.

Many will feel that “Bergman Island” doesn’t go anywhere; that Hansen-Love doesn’t have anything to say; that her writer’s block is as pronounced as that of Chris.  But for those at least intrigued, it practically demands a second viewing.  There’s more going on here than meets the eye.  I believe “Bergman Island” falls short of “masterpiece” or “classic” status.  But for a film in which hardly any action occurs, this one will resonate for a while.