In 2013, director Spike Jonze treated us to “Her,” a not-so-far-out science fiction romantic comedy about a man (Joaquin Phoenix) who falls in love with the voice of his virtual assistance (the voice of Scarlett Johansson).  “Her” was a real thought-provoking treat, although it was somewhat lost in a slew of great films that year.  As a side note, I find Alexa’s voice to be mildly seductive, although I would like to hear an occasional “You’re welcome” when I thank her for turning on my reading lamp. 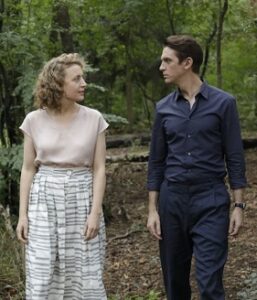 Now comes German director Maria Schrader’s “I’m Your Man,” which takes the artificial intelligence theme a step further.  Here, a research scientist (played by German actress Maren Eggert) participates in a three-week experiment to try out a humanoid robot pre-programmed to do nothing more than make her happy.  It’s unclear exactly how Alma (Eggert’s character) was selected for this duty, as her heart never seems into the project.  Give robot Tom kudos for trying, but his initial attempts at mere friendship are met with silence.

As Tom, British actor Dan Stevens hits just the right notes.  It’s a tough role, considering he can’t play it too campy, lest the entire film come off as slapstick.  On the other hand, if he’s too intense, no one would want him hanging around anyway.  Eggert seems either bored or shocked at first.  And in deference to her character, she’s probably so overcome with the technology that it renders her speechless.

Alma brings Tom with her, but won’t let her accompany her to work.  Instead, she drops him off at a local coffee shop for the day, where he interacts quite nicely with the locals.  This scene is funny and whimsical, and “I’m Your Man” could have used a few more of these scenes during the early going.

The second day, Tom is allowed to join Alma at her research lab, where he pitches himself as a colleague of Alma’s.  Since his robotic programming includes knowledge of absolutely everything, this guise is certainly believable to Alma’s co-workers.  The bottom line is Tom is well-liked and respected in any environment. 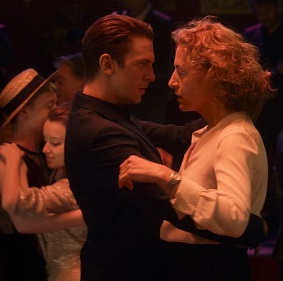 The problem, naturally, is that he is a robot.  He’s incapable of possessing actual feelings.  He can process information in such a way that he emulates feelings of sadness, happiness, disappointment, and so forth.  But Alma is smart enough to know these feelings aren’t real.  In one telling scene, Alma’s heart is broken when she realizes an Argentinian team of scientists is about to publish an article on the very same research Alma’s group has been working on for the past three years.  Tom is excited because all the research has been performed for the betterment of mankind.  He is unable to comprehend the idea of competition amongst the various research teams.

It is because of this “non-human” aspect (and let’s face it, certain emotions and reactions simply cannot be programmed into a robot) that guides Alma’s unwillingness to accept Tom as an equal – in any sense.  As a co-worker, companion, lover, etc.  As these feelings of hers come to the forefront, Eggert shines as an actress.  This is her first wide-release film in the U.S., and she has a wonderful opportunity to show off her acting chops.

In films like this, it’s often the actor of the “affected” character who garners most of the attention.  Yet it is the actor who must play off the affected character (i.e. the “straight man”) who has the more difficult assignment.  Think Dustin Hoffman in “Rain Man.”  His autistic savant character earned him an Oscar.  But I believe Tom Cruise had the more challenging role as the straight man forced to react to Hoffman’s one-note character.

The same is true of Damien Chazelle’s “Whiplash.”  It was J.K. Simmons’ ruthless jazz band teacher which won him an Oscar.  Yet I thought Miles Teller had the harder role, playing the poor percussion student forced to perform under his merciless hand.  In “I’m Your Man,” Dan Stevens is very good.  But Maren Eggert shows why she’s one of Germany’s best current actresses by playing off the almost creepy stalwart humanoid.  He’s simply too perfect.  Alma needs Tom to possess at least one minor flaw.

As “I’m Your Man” proceeds to its final act, the lighter comedic tone shifts to a more serious one, and that’s what sold me.  I know this is Germany’s entry for Best International Feature Film at next spring’s Oscar’s.  And as the film played out, I kept thinking there must be better German films to come later this year.  I was certainly entertained, but this was a light comedy.  As “I’m Your Man” assumes a more serious tone, the ideas put forth by screenwriters Jan Schomburg and Maria Schrader make us think.

“I’m Your Man” turns out to be headier than the average light comedy, and that’s a good thing.  Had this been a Hollywood production, the final act would have developed into slapstick, with a happy ending and all loose plot points tied up in a nice, proverbial bow.  In Schrader’s hand, the ending is not necessarily “happy,” but it forces us to think.  My only fear is that after the Oscar success of 2019’s “Parasite” (a very Tarantino-esque South Korean thriller), more foreign language directors will attempt to Americanize their work so that it garners accolades on this side of the ocean.  That’s not good.  I like “I’m Your Man” a lot, but it’s just “American” enough that I’m concerned for the future of international film.