When last we checked in with veteran writer-director Paul Schrader, he gave us one of his best films ever with 2017’s “First Reformed” – a tour-de-force for Ethan Hawke, who played a First Reformed pastor leading a dwindling congregation in upstate New York.  While ministering to those in his dying congregation, Hawke’s character struggled with his own belief in God as he saw the greater Church heading in what he believed was the wrong direction.  It was a hard-hitting and underappreciated film, which still stands as one of the best of 2017. 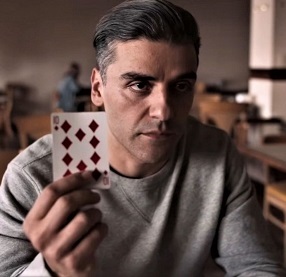 Now Schrader is back, albeit treading some of the same territory, in “The Card Counter,” another psychological drama – this time about a low-stakes gambler struggling with his own perception of the world around him.  Before taking up the gambling trade, William Tell (Oscar Isaac’s best performance since “A Most Violent Year”) spent over eight years in federal prison for his role in torturing Iraqi POWs at the infamous Abu Ghraib prison camp near Baghdad.

From the voice-over narration (a common technique of Schrader’s), we learn almost nothing about Tell’s pre-army life.  But we do ascertain his appreciation for military structure.  He liked the rigid and predictable schedule, and the tidiness of his living quarters.  It was in prison where Tell first took up reading.

Ironically, his post-military career mirrors that of his time in prison.  He never stays in a casino.  Instead, Tell holes up in single-floor low-rent roadside inns nearby – the kind of joints we often refer to as pay-by-the-hour motels.  Why?  As he explains, he doesn’t want the casinos to know anything about him.  He doesn’t necessarily have anything to hide; he simply chooses to remain inconspicuous.

Tell wraps all the motel furniture in white bedding – giving the entire room a sterile, drab, and dare I say predictable feel.  Cinematographer Alexander Dynan shoots these dark motel rooms in the same flushed tones as he does the early prison scenes.  In fact, the early frames of the prison flashback are so washed out, I thought he was filming in black and white.

But this is what Tell likes; this is his comfort zone.  And this is vitally important to remember during the surprise ending (another cinematic technique of Schrader’s). By contrast, Dynan shoots the Abu Ghraib scenes in shades of yellow and red – and with an extreme wide-angle lens reminiscent of Stanley Kubrick’s “A Clockwork Orange.”

Tell’s calculable, boring lifestyle is about to be rocked – by not one, but two, extraneous incidents.  First, he reacquaints with La Linda, an astute businesswoman (played by Tiffany Haddish) who has been after Tell for years to allow her to provide backers (or investors) who would front large sums of cash to Tell, in exchange for a portion of his winnings.

Keeping in character, Tell has never shown any interest.  As he explains to La Linda, he prefers to bet small and win small – just enough to put food on the table, but not enough that any of the casinos will ever take notice of him.  Again, this guy flies well under the radar.

About this same time, Tell is approached by young Cirk (pronounced Kirk), whose father also served time for his part in the Abu Ghraib torture sessions.  Cirk’s father has since committed suicide due to his PSTD.  Cirk (Tye Sheridan) blames Major John Gordo (Willem Dafoe) for training and brainwashing young soldiers into becoming agents of unconstitutional persecution.  He asks Tell’s help in killing Gordo, but (as we might expect) Tell advises Cirk to simply move on.

The protagonist as savior

Instead, Tell seriously considers La Linda’s offer to up his proverbial ante and accept financial backing, so that he can help Cirk pay off his college debt and further his education.  This plot structure is also common for Schrader.  It manifested not only in “First Reformed,” but also in Martin Scorsese’s 1976 classic “Taxi Driver,” for which Schrader wrote the screenplay.  Remember cab driver Travis Bickle’s drive to “save” a young prostitute (played by Jodie Foster) from the slavery of her career?  A similar narrative is in play here:  Bickle’s prostitute never requested his assistance, and neither does Cirk request a helping hand from Tell.  Schrader’s lead characters seem to have a burning desire to replace their own losses with heroic acts of kindness and redemption toward others.

None of this is to say that “The Card Counter” is exactly like any other film ever made – even those by Paul Schrader.  Yes, it is derivative of both his cinematic structure and his narratives.  But remember what excellent company we’re in here:  “First Reformed” was one of the best of recent years, and “Taxi Driver” is one of the greatest and most important films ever made.  I’m not prepared to say either “The Card Counter” or even “First Reformed” are in the same league as “Taxi Driver,” but “The Card Counter” is certainly the best picture I’ve seen so far this year.

Best of the year, so far

Because the 2020 season was delayed by Covid, 2021 is going to be a short season.  “The Card Counter” may not have as much competition as it might have in a full-length movie season.  That bodes well for potential Oscars and its placement on many critics’ Top Ten List.  It’s already at the top of mine.