There’s a scene in the middle of Michael Showalter’s new film, “The Eyes of Tammy Faye” where televangelist Tammy Faye Bakker interviews AIDS victim Steve Pieters.  He explains when he realized he was gay, the reaction of his family and friends, and how he’s coping with his disease.  Tammy espouses her support, and explains (as always) that God loves him for who he is – that God simply made him that way.

Nothing particularly controversial here, except that the interview occurs during the 1980s, when such thinking was considered radical – particularly in the world of televangelist ministry.  As fellow TV preacher Jerry Falwell looks on in disgust, Tammy’s husband Jim Bakker feverishly attempts to cover for his profound wife.

This moving scene shows Tammy Faye Bakker doing what she did best – rocking the boat in the unforgiving world of broadcast preaching.  She was a trailblazer, and I only wish “The Eyes of Tammy Faye” contained more scenes like this one.  Instead, her interview with Pieters is the only high point in a paint-by-numbers biopic about perhaps the most captivating figure in TV ministry.

As Tammy Faye, Jessica Chastain turns in another brilliant performance – rivaling her work in “Zero Dark Thirty” and “Molly’s Game.”  But sadly, a great performance does not make for a great film.  It’s as though Showalter (a great director in his own right – remember “The Big Sick” a few years ago?) nabbed Chastain for the role and thought his work was done.  Screenwriter Abe Sylvia gives us a biography that any of us could have written. 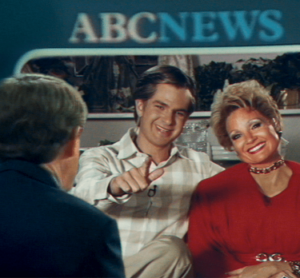 If there are any surprises in this screenplay, I don’t know what they are.  We all know the Bakkers built an enormous empire, incurred insurmountable debt, bilked their supporters of millions of dollars of donations to their ministry, and paid hush money to cover up Jim’s affair with a former secretary, while they lived the high life in a multi-room mansion.  To quote a biblical reference, they robbed Peter to pay Paul.  But again, we know this.  We know Jim Bakker served time in federal prison, and we know Tammy Faye was unsuccessful in rehabilitating her public image.  They became fodder for late night comedians and “Saturday Night Live” sketches.

What made her tick?

There’s nothing new here.  Even the less well-known tidbits of information – that they met while in seminary, that Tammy was raised in a conservative Christian environment, that young Jim was charming and confident, that she became addicted to painkillers – are not surprises.  We could have imagined any of this.  What’s missing here is anything inside Tammy’s brain.  What made her tick?  It’s the exact same complaint I have with “Bohemian Rhapsody,” the grossly overrated 2018 biopic of Queen lead singer Freddie Mercury.  “The Eyes of Tammy Faye” plays out like a book report on someone’s life – all facts and no substance.

Why did she feel the need to welcome gays and lesbians into the church at a time when other televangelists wanted them excommunicated from the church?  Why didn’t she exert more control over the financial condition of her husband’s ministry?  Why did she wait until Jim was imprisoned to divorce him?  Perhaps we’ll learn these answers in another film.  I was hoping it would be this one.

But poor Andrew Garfield has the difficult task here.  He’s an excellent actor (“99 Homes,” “Silence”), but the character of Jim Bakker is the least focused of the screenplay.  He comes off as a lightweight – nothing more than a plastic bag floating through the air whichever way the wind blows.  When he’s with Falwell, his biblical interpretation is rigid.  When Tammy embraces AIDS victims on television, he’s excited because donations come roaring in faster than ever.  So, what does he believe – that homosexuality is a sin which the church must never tolerate?  Or that God loves everybody, and made LGBTQ people exactly as they are?  Again, we’ll never know by watching “The Eyes of Tammy Faye.”

What about Hahn affair?

There is also scant attention paid to Bakker’s affair with church secretary Jessica Hahn.  In fact, she’s not even a character in this film.  I realize this is Tammy’s story – and Tammy’s own infidelity is well documented here – but the Hahn affair was the trigger that brought down the entire Bakker empire.

Hard to care about characters

Showalter and Sylvia don’t necessarily present the Bakkers as evil.  Instead, Tammy comes off as loving but detached; Jim is presented as a man with good intentions but not a good businessman.  Are these characterizations correct?  I don’t know.  And unfortunately, after watching “The Eyes of Tammy Faye,” I don’t care.