As the Covid crisis lingers uncomfortably throughout the world, our lives continue to change.  Do we wear masks in public or not?  Can we shake hands with those who have not been vaccinated?  Zoom meetings are now a part of life; and eating out may never be the same.  We know the service industry took a big hit.  And raw material shortages continue to hamper the flow of business.

Meanwhile in New York, live theatre has been dormant for the past 18 months.  While athletes eventually returned to the basketball court and the baseball diamond (and the Olympic stage), Broadway simply couldn’t justify cramming theatergoers into tight concert halls to watch productions.  That changes this month, as 42nd Street lights up again with the magical lights and sounds of Broadway.

I envisioned Oren Jacoby’s new documentary “On Broadway” to be a lament of the past year and a half by the performers, directors, and theatre owners – a public display of dismay surrounding the lost revenue and silenced voices of the recent past.  That might have made for an interesting 90 minutes in the movie theatre.  Instead, Jacoby treats us to a trip through the history of the Broadway theatre – touching on each of the ups and downs of the past half century.  Does that make this a less interesting production than that which I imagined?  Not necessarily.  Although, as with Marilyn Agrelo’s “Street Gang: How We Got to Sesame Street,” there’s simply too much material to cover.  Consequently, “On Broadway” is interesting, if merely in a superficial way.

Structure of the film 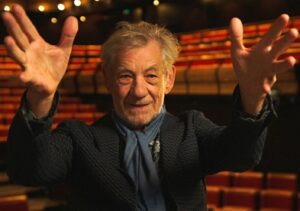 As talking heads such as Ian McKellen, Alec Baldwin, John Lithgow, Helen Mirren, and James Cordon provide insight, we’re treated to footage of some of the most revolutionary shows in history.

Following a brief review of the so-called Golden Age of Broadway (think Rodgers and Hammerstein musicals), Jacoby drops us into the early ‘70s lull, in which live New York theatre faced its deepest crisis ever.  42nd Street was so cluttered with pimps, whores, and drug pushers, locals and tourists were afraid to visit the theatre.  Attendance had dropped 75% between 1968 and 1972.  The New York of 1972 was that which was exposed in films such as “Midnight Cowboy” and “Taxi Driver.”  The city was on the verge of bankruptcy.

While Mayor Abe Beame worked his magic at the municipal level, Broadway director Michael Bennett staged a theatrical workshop of sorts, betting theatergoers eager for something new would pay to watch what was essentially an audition session.  With music by Marvin Hamlisch, “A Chorus Line” became Broadway’s longest running show.  Coupled with “Annie” and other big budget productions, Broadway was saved.

But with each advancement comes a flip side.  Yes, audiences were returning to a cleaned-up Times Square – but at the expense of the smaller, more intimate non-musical shows.  And that’s what “On Broadway” does best:  Jacoby shows us the highs and lows of the Broadway stage of the past 50 years.  Each high is responsible for a corresponding low.  When the low is rectified, it brings another corresponding low.

For example, big British musicals hit the stage during the 1980s – “Cats,” “Les Miserables,” “Phantom of the Opera,” “Miss Saigon,” and so forth.  It wasn’t until August Wilson’s dramatic plays hit the stage beginning in the 1990s that small, intimate non-musicals returned in fashion.  And for the first time, African Americans began to comprise a significant segment of the Broadway audience.

While the AIDS crisis devasted Broadway in the 1980’s, well-received productions about AIDS and homosexuals (“Angels in America,” “Torch Song Trilogy”) soon followed.

Similarly, when Disney “diluted” Broadway by bringing musical productions of “Beauty and the Beast” and “The Lion King” to the New York stage, families with young children were now attending shows for the first time. 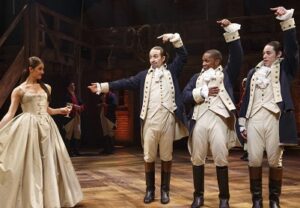 Jacoby shows us how Lin-Manuel Miranda’s “Hamilton” brought in the hip-hop audience for the first time.  Black and brown people now comprised a compelling segment of the crowds.

The strength of “On Broadway”

The ups and downs of Broadway, and the way the ups and downs are intertwined and responsible for one another.  That’s the joy and fun of watching “On Broadway.”  Don’t expect anything deeper than that.  Again, there’s simply too much material to cover.  For a more in depth look at the history of the Broadway stage, we’ll have to hope for a Ken Burns documentary on PBS.  But for a 90-minute romp through some of the greatest shows of all time, “On Broadway” is a winner.

Andy Ray‘s reviews also appear on https://youarecurrent.com/category/nightandday/film-reviews/.  He is a member of the Indiana Film Journalists Association.