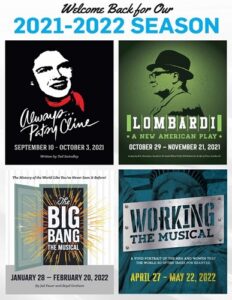 Actors Theatre of Indiana is excited to share that they are returning to live and in-person theatre for the 2021–2022 season! This season is packed with exciting, high-quality, professional performances that will engage and inspire – and maybe teach us something new along the way. ATI returns to The Studio Theatre September 10 to kick off this new season!

The new ATI season will kick off with ALWAYS…PATSY CLINE, running from September 10 to October 3, 2021. This true tale of friendship is told through the letters of Louise Segar, a devoted fan who befriended Patsy Cline at a Texas honky-tonk. It was the kind of relationship that many fans would love to have with their heroes. Featuring Cline’s unforgettable hits, this funny and touching tribute celebrates the life and career of the legendary singer who died tragically in a plane crash. “I Fall to Pieces,” “Sweet Dreams,” and “Walking After Midnight” are just a few of the 27 featured songs – It offers fans who remember Cline a chance to look back, while giving new fans an idea of what she meant to the Country Music Industry and why she was such a Super Star. You’d be “Crazy” to miss it!

Right in the heart of football season will be LOMBARDI, being performed from October 29 thru November 21, 2021. This Tony nominated Broadway play follows Coach Vince Lombardi of the Green Bay Packers through a week in the 1965 NFL season as he attempts to lead his team to the championship. Although football’s Super Bowl trophy is named for him, few know the real story of Lombardi the man, his inspirations, his passions, and his ability to drive people to achieve what they never thought possible. Sport produces great human drama and there is no greater sports icon to bring to theatrical life than Hall of Fame Coach Vince Lombardi. “Winning isn’t everything, but the will to win is everything.”

The year 2022 starts off with a bang – THE BIG BANG. From January 28 to – February 20, 2022 you’ll find yourself in the living room of an elegant Park Avenue apartment in New York City. Jed and Boyd, along with their pal Albert on the piano, stage a backers’ audition for an 83.5 million-dollar, twelve-hour long musical depicting the history of the world from creation to the present. Eighteen sidesplitting numbers portraying Adam and Eve, Attila the Hun, the building of the pyramids, Julius Caesar, and Christopher Columbus, among others, give potential investors a taste of the impending extravaganza. In the process, the opulent Park Avenue apartment “borrowed” for the occasion is trashed as the two snatch its furnishings to create makeshift costumes while singing and clowning their way through inventive recreations of the past. This is one history lesson you’ll never forget! (Note that this performance is RATED PG-13)

The 2021-2022 ATI season will wrap up with WORKING: THE MUSICAL from April 27 – May 22, 2022. This examination of 26 people from all walks of life proves that it’s more than just a job for the average working American. Based on Studs Terkel’s best-selling book of interviews with American workers, Working paints a vivid portrait of the men and women that the world so often takes for granted: the schoolteacher, the phone operator, the waitress, the millworker, the mason, and the housewife, just to name a few. Nominated for six Tony Awards, this classic has been updated for a modern age, featuring new songs by Tony Award-winning Lin-Manuel Miranda, as well as favorites by Stephen Schwartz, Craig Carnelia, and James Taylor.

You can call the box office at The Center for the Performing Arts at (317) 843-3800 to order your tickets beginning July 23, or visit atistage.org.