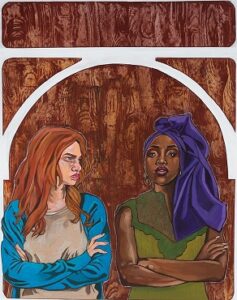 The Indiana Repertory Theatre continues its 2020-2021 virtual season with the second show in this season’s INclusion Series (which celebrates diverse storytelling) Mrs. Harrison. Written by R. Eric Thomas and directed by Mikael Burke, the play raises the question, who has the right to tell whose story? The first show this season filmed in the IRT Upperstage Theatre, this simmering confrontation and winding look at truth and storytelling will stream May 6 – 30, 2021.

In Mrs. Harrison, two women meet at their ten-year college reunion. Aisha is a successful Black playwright, and Holly is a struggling White comedian and storyteller. As they dredge up shared memories and past confidences, audiences begin to wonder—which one is misremembering? Or lying? Or are they both?

“When I talk about Mrs. Harrison, I always come back around to the idea that I don’t know the whole story any more than you,” Playwright R. Eric Thomas said. “I mean, I know what happens. I’ve seen this play. But what you’re seeing is one story, what you’re experiencing is another story, and what Holly and Aisha are living is two more stories. At least. Mrs. Harrison is a story about storytelling and the way the past looks different from various vantage points.”

About the playwright and director

R. Eric Thomas is a Barrymore Award-winning playwright, author, long-running host of The Moth in Philadelphia and Washington DC, former senior staff writer for Elle.com, and television writer. Leading the cast in the development of his play is director Mikael Burke, who directed The Watsons Go to Birmingham—1963 last season on the IRT Upperstage. Burke is a graduate of Butler University, and is known for his work around the Indianapolis theatre community.

Both actors in the production are Chicago-based and making their IRT debuts: Celeste M. Cooper plays Aisha, and Mary Williamson plays Holly. These two women will bring to life a story where wry humor clashes with long-suppressed grudges all fueled by the power of memory and truth.

“It’s very difficult to know exactly where truth lies in this play, and that’s a huge part of its appeal,” IRT artistic director Margot Lacy Eccles said. “Why do we each remember the past so differently? How is memory filtered by what comes after? Or even by what came before?”

Virtual tickets for Mrs. Harrison are now available for $30, and streaming begins May 6. To learn more about the entire season and purchase virtual tickets, please visit https://www.irtlive.com/.