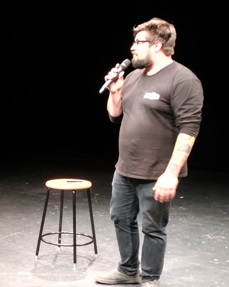 For those who want to check an item off their bucket list, escape their comfort zone, or improve their speaking skills, the Center for the Performing Arts is offering another round of its Intro to Stand-Up Comedy class.

In four weekly sessions May 3-24, participants learn the history and evolution of stand-up comedy, along with the basics of joke writing and performance. Under the guidance of the instructor, each student writes and rehearses his own five-minute routine to perform for friends and family at the graduation show May 29 in the Center’s Studio Theater.

Instructor Dwight Simmons is a nationally known comic who has been featured on Kevin Hart’s LOL Radio on Sirius XM and on the syndicated The Bob & Tom Show, for which he is also a writer. He is a co-director of the annual Limestone Comedy Festival in Bloomington and the creator and host of the web series BrewTube Comedy. In 2018, Simmons’ self-produced album Sip and Pass reached No 1 on the iTunes comedy charts, making it his second release to do so. That same year, he was the Indiana selection for Thrillist’s “Best Undiscovered Comedian from Every State.”

The class is recommended for ages 17 and older, and limited to 15 participants. The cost is $90. The three-hour weekly sessions will begin at the Palladium, 1 Carter Green, with physical distancing and other public health protocols in place. Registration and more information are available at (317) 843-3800 or TheCenterPresents.org/IntroToComedy2021.