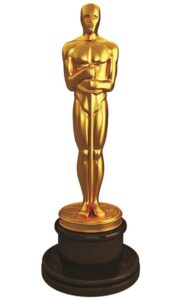 Of the eight films nominated for Best Picture of 2020, three of them stand a legitimate chance of bringing home the big prize:  “Mank,” “Minari,” and “Nomadland.”  “Promising Young Woman” is an outstanding directorial debut for Emerald Fennell, but it’s a little too weird for the Academy’s taste.  “The Father” and “Trial of the Chicago 7” should be on the short list, but neither Florian Zeller (“The Father”) nor Aaron Sorkin (“Trial of the Chicago 7”) were nominated for Best Director, and that’s typically a sign their films will not win Best Picture.

Before we look at the three films I’ve cited, let’s first note two glaring omissions.  Where on earth are Regina King’s “One Night in Miami” and George C. Wolfe’s “Ma Rainey’s Black Bottom?”  They each made my Top Ten list for 2020, and should have been nominated for Best Picture.  Just five years after the Academy selected “Moonlight” as the year’s best film (in the wake of the previous year’s outcry over the lack of nominations for African-American films), I see a return to the days when even the best Black pictures were not nominated.  The Academy did see fit to nominate Shaka King’s “Judas and the Black Messiah,” but it is not as strong a candidate as the other two.

Of the three films I cited, let’s first look at “Mank.”  This was the story of screenwriter Herman J. Mankiewicz, and his effort to produce the rough draft original screenplay for Orson Welles’ classic “Citizen Kane” – often cited as the film that changed motion pictures forever.  There’s a lot to like in “Mank,” but it’s not Best Picture material.  My biggest problem with “Mank” is the lack of attention paid to the public outcry against “Citizen Kane” by publisher William Randolph Hearst, often cited as the subject of Welles’ film.  Hearst’s efforts to locate and destroy every copy of “Citizen Kane” prior to its release should have played a major role in “Mank.”  Instead, “Citizen Kane” opens with nary a public shrug in “Mank.”  While Hollywood loves pictures about Hollywood, “Mank” simply does not belong in the company of these other great candidates.  And as a side note, “Citizen Kane” shockingly did not win Best Picture for 1941.  But it’s not as though the Academy “owes” Welles a victory for “Mank.”  Heck, Welles has been deceased since 1985.

“Minari” is a warm and loving drama about a Korean family’s attempt to earn a living (and feed themselves) with a self-sustaining American farm.  I would certainly enjoy seeing it win – although “Parasite” just became the first foreign language film to win Best Picture last year.  While deserving, it might be a stretch to think a second foreign language film (and another in Korean) might win the very next year.

My personal favorite picture of the year is Chloe Zhao’s “Nomadland,” a soft-spoken, deliberately-paced tribute to those who live out of their vans in the American West – a group whose numbers grow during each economic slowdown.  The great Frances McDormand heads a cast of non-actors (actual nomads playing themselves) in this gentle, eye-opening memorial to those who (for one reason or another) choose this lifestyle.  It should win, and I believe it will.

Chloe Zhao is an excellent, up-and-coming director, who often populates her films with non-actors – as she’s done in “Nomadland.”  That’s an interesting technique, and it’s paid off in spades here.  She should win, and will.

I like the fact that Lee Isaac Chung was nominated for “Minari,” and Emerald Finnell for “Promising Young Woman.”  I believe these two will have their days.

I mentioned previously that directors Florian Zeller and Aaron Sorkin are suspiciously absent from this category, even though “The Father” and “Trial of the Chicago 7” both made the Best Picture cut.  Ironically, this year Danish director Thomas Vinterberg has been nominated for “Another Round,” a film which nobody saw, and which does not appear in the Best Picture list.  If they were going to nominate a director for a film not nominated for Best Picture, why not actress Regina King, whose directorial debut was the supremely interesting and educational “One Night in Miami?” 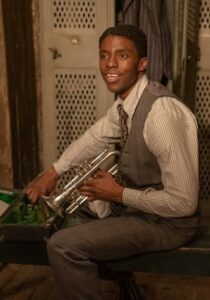 Of the acting awards, this is probably the easiest call of the year.  Even though “Ma Rainey’s Black Bottom” is not nominated for Best Picture or Best Director, the late Chadwick Boseman should receive the trophy for his pivotal portrayal of a strong-willed ladder-climbing trumpet player.  It’s the key role in the film, it’s the best performance of his career, and Boseman died of cancer last August.  Boseman has been an excellent actor for many years, but he’s never won before.  This is obviously the Academy’s last chance to acknowledge Boseman’s work.

While I absolutely loved Boseman in “Ma Rainey,” I believe Anthony Hopkins turned in the best performance of the year by anyone in any film in “The Father” – a story of a man experiencing dementia, but told from the point-of-view of the victim.  It’s a unique approach to the subject matter, and it works – in large part, due to Hopkins.  I know Hopkins has won before; he’s one of our most honored acting talents.  But if I have to make the call on strength of the performance in question, Hopkins gets my vote.

As a side note, I have no problem with the inclusion of Gary Oldman in this category.  His portrayal of Herman J. Mankiewicz was the best part of “Mank.”  But Oldman just won three years ago for playing Winston Churchill in “Darkest Hour.”  I don’t think he’ll win again.

And where on earth is the late Brian Dennehy, who turned in perhaps his best acting job ever in the sentimental “Driveways?”  If the Academy is going to award Chadwick Boseman posthumously, isn’t Dennehy equally as deserving?  His career spanned over 40 years, and he never won.  He should at least be nominated. 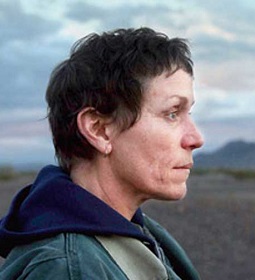 This one’s a tougher call.  Frances McDormand gets my vote as the lead nomad from “Nomadland.”  Playing against type, she’s so good you can barely tell she’s acting.  Unfortunately, these low-key performances typically do not impress the Academy as much as those big, powerful roles that scream “Acting!”

And that’s why I believe the Academy will bestow its top honor on Viola Davis for her interpretation of 1920s jazz singer Ma Rainey.  Yes, Davis just won Best Supporting Actress for 2016’s “Fences” (based on an August Wilson play, just like “Ma Rainey”), but I say they’ll award her anyway.  After all, I believe she was nominated in the wrong category for “Fences.”  That was a lead actress role, but they placed her in the Supporting Actress category that year.  So, she’s due for the big one.

There’s an outside chance Carey Mulligan could walk away with the Best Actress Oscar for her striking role as a young woman who plays drunk just to see if any young man will offer to take her home.  As “Promising Young Woman” progresses, we’re never certain just how far she’ll go in her quest to seek revenge on the entire male population.  It’s a great performance; but again, this is a strange film, and that may turn off some voters. 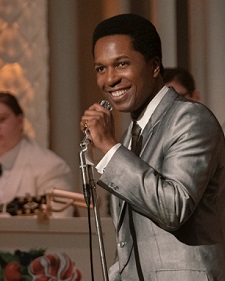 Leslie Odom Jr. received the only major nomination for “One Night in Miami” in the Supporting Actor category, for his fabulous turn as the late singer Sam Cooke in this riveting drama.  Of the four major roles in this adapted stage play, Cooke’s is the most colorful, and Odom plays it to a tee.  It’s a great performance, it should win, and it will win.

But I’d like to focus on Sacha Baron Cohen’s nomination for his interpretation of Yippie leader Abbie Hoffman in “Trial of the Chicago 7.”  Save for the fact that Cohen is primarily known for his hilarious, albeit interminably silly, roles in the Borat films, I cannot figure why he’s nominated here.  It’s not as though Cohen hasn’t dabbled in more serious roles before.  I’m guessing the Academy is proud of him for branching out, but that doesn’t make this a groundbreaking performance.

Instead, the nomination (and the win) should have gone to veteran character actor Frank Langella, who played the overmatched judge in “Trial of the Chicago 7.”  Langella has churned out brilliant performance after brilliant performance, year after year after year.  This role should have finally brought him the Oscar he deserves.  And they nominated Cohen instead.  Don’t get me wrong.  Cohen’s not bad in “Trial.”  But you watch it, and then tell me which performance was the best in the entire film. 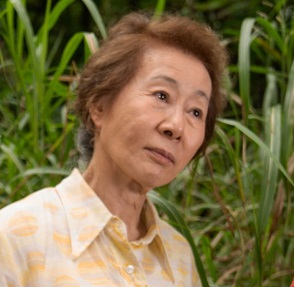 This category is a tough call, but only because most of the nominees are not particularly deserving.  Olivia Colman is up for playing the daughter of Anthony Hopkins in “The Father.”  She’s certainly not bad, but there’s nothing particularly interesting about the role, nor of her performance.

Glenn Close has received her seemingly annual acting nomination for Ron Howard’s “Hillbilly Elegy” – a truly awful film.  Close doesn’t stand a chance, which makes me wonder why they couldn’t have found someone else – perhaps in a less well-known picture – to flesh out the nominations in this category.

Maria Bakalova was good in “Borat Subsequent Moviefilm,” but the Academy is typically reluctant to bestow awards on such frivolous fare as the Borat films.  That leaves Amanda Seyfried, who played actress Marion Davies in “Mank.”  Again, there’s nothing particularly special about her performance, but this may be the one major prize “Mank” takes home – if for no other reason than it’s a weak category this year.

My vote goes to veteran Korean actress Youn Yuh-jung, who played the free-spirited grandmother in “Minari.”  When she moves in with the struggling family, her presence provides a welcome shot in the arm to the screenplay, and her character’s interaction with the kids is priceless.  She has most of the film’s best lines, and she delivers them expertly.

In the original screenplay category, I’d take Emerald Finnell for writing the year’s most original (and darkest) script for “Promising Young Woman.”  As far as the academy is concerned, I’d give Finnell about even odds with Lee Isaac Chung for “Minari” and Aaron Sorkin for “Trial of the Chicago 7.”  “Trial” is the weakest of these three films, but there are a lot of proverbial balls to keep in play here (the Yippies, the political activists, the Black Panther, the judge, etc.), and Sorkin does an excellent job keeping the proceedings easy to follow.

The year’s best adapted screenplay is that of Chloe Zhao who adapted “Nomadland” from a non-fiction book by journalist Jessica Bruder.  Unlike “The Father” and “One Night in Miami” (which somewhat come off as filmed plays), it is impossible to tell “Nomadland” is based on other source material.  It’s so original, the average viewer would assume the screenplay was written from scratch.

I do have an issue with this category, however.  Sacha Baron Cohen is nominated for “Borat Subsequent Moviefilm,” even though the screenplay is nothing if it isn’t original.  The Academy considers the screenplay “adapted,” because it’s based on the character Borat, created by Cohen.  So, this means every time Peter Sellers played Inspector Clouseau (save for the first time), the screenplay was “adapted,” because it was based on the character of Inspector Clouseau?  I call B.S.

So, there you have it.  I’m predicting a well-deserved big night for “Nomadland,” and (at least in the acting categories) “Ma Rainey’s Black Bottom.”  Unfortunately, my biggest takeaway is the lack of nominations for a couple of the great Black features out this year.  And that’s a shame.  I thought the Academy had made progress in this area.  I realize all progress takes time, but “Ma Rainey’s Black Bottom” and especially “One Night in Miami” should have been shoo-ins for Best Picture.