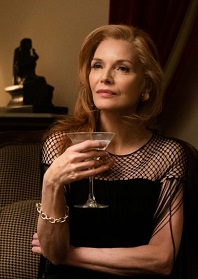 In Azazel Jacobs’ new film “French Exit,” Michelle Pfeiffer plays Frances, a wealthy New York socialite whose fame has long since passed, and whose wealth is at its end.  When her financial advisor recommends selling her artwork and other assets, Frances and her son Malcom (Lucas Hedges) move to Paris to live in the unused apartment of a close friend.

Frances is cold, irrational, and overly confident – a role Michelle Pfeiffer could practically play in her sleep.  Malcolm is indifferent, and… well, just plain indifferent.  He goes along with his mother’s every whim, although he doesn’t seem to have much choice.  Logic would tell Malcolm to cut his losses and distance himself from his erratic snob of a mother.  But logic plays no part in “French Exit,” which Canadian writer Patrick deWitt adapted from his 2018 novel of the same name.

Upon arrival in France, Frances lines up several piles of euros, and then proceeds to blow through them at the same rapid-fire pace as she did back in New York before she learned of her imminent penniless doom.  She overtips, gives money to the homeless, and spends money on frivolities.

And Malcolm does nothing to stop her.  Although it’s hard to tell, he’s concerned about his fiancée/girlfriend Susan back in New York.  Bothered by Malcolm’s inability to stand up to his mother, she’s played by British actress Imogen Poots, who also has a strong supporting performance in “The Father.”

Just when the characters of Frances and Malcolm have become tiresome (and mind you, that doesn’t take long), our protagonists are invited to a dinner party at the apartment of another transplanted New York socialite – the lonely Madame Reynard, played by veteran television actress Valerie Mahaffey.  She’s lonely, and all too willing to please, just to make new friends.  In other words, she’s the type Frances would walk all over.  And she does, at first, before the two become friends, in sort of an “odd bedfellows” relationship.  Mahaffey injects a breath of fresh air into the screenplay at just the right time.

Soon, Frances’ cat disappears into the dark of night.  This shouldn’t be a major plot point, except that the cat, Small Frank, is the reincarnation of Frances’ deceased husband Frank.  In her desperate attempt to communicate with the cat (i.e. Frank), Frances hires a private investigator to locate a psychic who was able to communicate with Small Frank on the ship ride across the Atlantic. 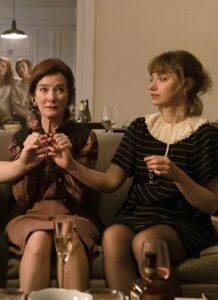 If this setup sounds increasingly farfetched, it certainly is.  But the scene where Frances, Malcolm, and Mme. Reynard hatch the plan to locate the medium is the one truly hilarious, well-written scene in “French Exit.”  It is at this point when deWitt could have taken these characters and written a very funny second half.  Instead, the conversations between Frances and Malcolm become increasingly serious – as though they are “about something,” when they really have no substance.

Meanwhile, deWitt falls back on the comic ploy of reintroducing every character in the film, when they all show up at the apartment at the same time.  Even New York girlfriend Susan shows up to see if there is any future in her relationship with Malcolm.  And she brings her new fiancée with her!  Just because the situation is farfetched doesn’t make it funny.  These characters need to do and say funny things.  And, save for Mme. Reynard, they do not.

Just because the apartment is filled with every character at once doesn’t warrant laughter, in and of itself.  More like confusion.  To wit, don’t the private investigator and Mme. Reynard have homes to return to?  Why are they spending the night with Frances and Malcolm?  By contrast, when Groucho Marx’ stateroom became overloaded with cleaning ladies and janitors in the Marx Brothers’ classic “A Night at the Opera,” we laughed because all Groucho’s characters had a reason to be in his room – just not at the same time.  Here, only Susan, her fiancé, and the psychic are visiting from out of town.  The presence of the others is supposed to make us laugh – what with the odd sleeping arrangements and overall lack of space.  But in reality, “French Exit” is more of a promising idea that never feels “fleshed out.”

Monty Python could have taken these exact same characters and gone for broke.  They would have given us a real comedy – in which the characters act within reason – with a well-written script chock full of witty one-liners.  What a treat “French Exit” could have been.  Instead, we wallow in the pity of Frances and Malcolm – two downright unlikeable characters, who (apparently) have something to tell us, but whose platitudes don’t add up to anything.  “French Exit” is not entertaining, except for one scene.  This film has a lot of promise, but ultimately fails to deliver.  It’s a major disappointment.