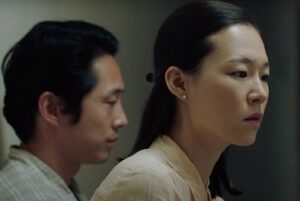 As Lee Isaac Chung’s “Minari” opens, Jacob and Monica Yi have just moved from California to Arkansas, where Jacob has bought a plot of land.  His goal is to grow Korean crops and sell them to distributors in Dallas.  During the day, Jacob and Monica work at a local hatchery.  Their children are Anne, approximately ten years old, and David, about five.  David has a heart condition which requires constant monitoring.

Jacob enlists the help of a local man, Paul, who knows a thing or two about farming.  Paul is highly religious – and by this, I mean he frequently speaks in tongues, and spends his Sunday afternoons carrying a cross throughout the countryside.  Considered a bit of an outcast by the locals, Paul’s assistance is invaluable as Jacob maintains a steadfast determination to succeed, despite numerous setbacks.

To help with the children, Monica’s mother emigrates from Korea and moves in with the Yis.  Her presence immediately adds a jolt of electricity into Chung’s original screenplay.  She cusses, teaches the kids how to play cards, and occasionally challenges Jacob’s parenting decisions.  She shows young David the best spot on the Yi property to plant Minari, an Eastern plant used in cooking, and sometimes referred to as Chinese Celery.

Korean-American actors Steven Yeun (“The Walking Dead”) and Han Ye-ri play the Yis, and veteran character actor Will Patton is Paul.  It’s POatton’s meatiest role in some time, but Paul’s religiosity seems out of place with the rest of the film.  Perhaps this aspect of the character is supposed to exemplify the idea that religious fanatics are more likely to be found in Rural America than in the cities.  Perhaps it’s meant to show us that Paul is unlikely to hold down a “real” job because of his constant religious ranting – hence his availability to assist Jacob.  Either way, this aspect of the character doesn’t seem to fit in an otherwise very tightly written screenplay. 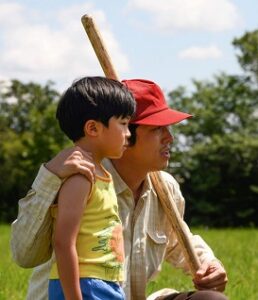 “Minari” is not so much a film about farming as it is a wonderful family drama, filled with emotional moments of both joy and heartbreak.  Monica, who appears to be from a higher socio-economic status than Jacob, is never fully on-board with the family farm idea, and she longs to return to California.  David has trouble bonding with Grandma, as she does not fit his impression of the classic American grandmother.

All is not constantly happy in the Yi family, as Jacob and Monica do fight in front of the kids.  As you might expect, these arguments involve finances – particularly the amount of funds that must be borrowed to operate a successful farming operation.  There are also health concerns with David’s heart and with Grandma’s age.

Fortunately, the townsfolk are not portrayed as backwater hillbillies, the way they were in Ron Howard’s recent bomb “Hillbilly Elegy.”  Every white person we meet strives to make the Yis feel welcome in their new home.  There is no overt racism in “Minari,” although there are a few instances of what I’d call “accidental racism.”  At a church picnic, a white boy asks David why his face is so “flat.”  But five seconds later, he asks David to a sleepover at his house.

Another telling scene occurs when Monica places a $100 bill in the church collection plate – apparently trying to make an impression on those sitting near them.  But Grandma, with all her practical sensibility, quickly removes the bill, as those funds are needed for the farm.  “Minari” is chock full of these tender and emotional moments.

In that sense, I equate it somewhat to Andrew Ahn’s “Driveways,” out earlier this year, in which a crotchety Korean War vet (Brian Dennehy, in his final role) strikes up a friendship with the boy who moves in next door.  Not only does “Minari” strike some of the same emotional chords as “Driveways,” but both films center around generational relationships between the aged and the young.

I don’t want to pigeonhole “Minari” as a family film.  Again, there are scenes of parental arguments, and divorce is discussed openly.  But “Minari” is a wonderful film about a family, which should appeal to a wide audience.  So far this year, I’ve seen no other films that come close to challenging “Minari” as the year’s best foreign language film.