Emma and Jude are a young couple who “meet cute” on a beach, when Jude is taken by Emma’s British accent.  The two fall in love and marry, as the world wrestles with a pandemic.  Sounds current enough, right?  In fact, Chad Hartigan’s “Little Fish” was written and filmed prior to the Covid-19 pandemic; it’s a mere coincidence that this picture has been released amid a worldwide virus.  Mattson Tomlin’s screenplay was adapted from a short story by Aja Gabel, written over a decade ago.

In “Little Fish,” the virus causes the victims’ memories to slowly disappear – begging the question whether it would be preferable to lose one’s memory all at once, or watch it fade away and bits and pieces, knowing the path one’s life will soon take – a la Cliff Robertson’s character in “Charly” or Robert DeNiro’s character in “Awakenings.”  At first, Jude’s memory loss is so subtle, he and Emma assume he’s simply forgotten a few small details.  But when Jude is unable to recall conversations of the previous day, our protagonists know something is wrong.

Fortunately, a clinical trial is underway at a hospital in Emma and Jude’s unnamed home city.  Emma signs up Jude for the experimental surgical procedure.  At about this juncture, some directors (Steven Spielberg comes instantly to mind) would have taken this material in a drastically different direction.  Spielberg would have presented the spread of the virus and the clinical trial in a worldwide platform.  The national news reporters would likely have been given as much screen time as Emma and Jude.  We would have been privy to all manner of interviews with scientists from around the world, and with victims’ loved ones wrestling with the disease.

Instead, Hartigan takes a more personal approach, constantly refocusing the story on Emma, Jude, and their immediate circle of friends and colleagues.  It’s not as though the outside world is kept from us.  But Hartigan demonstrates the effects of the virus only as it pertains to the lives of Emma and Jude.  Rather than a “60 Minutes” feature story, “Little Fish” highlights a city bus ride in which Emma’s driver suddenly forgets his route.  Or a boating expedition in which a rider jumps overboard, thinking she can swim to shore.  It’s a different tact from what might be expected given the material, but it’s refreshing to see Hartigan keep the story on a small scale.

As Emma and Jude, Olivia Cooke (“Thoroughbreds,” “Ready Player One”) and Jack O’Connell are instantly relatable to a wide audience.  Younger viewers are likely to see themselves in Emma and Jude; I saw my children and their significant others.  And it’s this relatability that causes the narrative to hit home for viewers.  Cooke especially connects, with her bubbly charm, but also with her deeper understanding of the pandemic.  Her character is a vet technician, after all.

There is a certain amount of jumping around in time, although it’s necessary in “Little Fish.”  As Emma attempts to pull nuggets of memory from Jude’s brain, we see earlier scenes play out in real time.  In this case, that’s a plot requirement, as opposed to a plot contrivance.  Fortunately, Hartigan eliminates the annoying titles that pepper other such time period jumps in films like the recent “Our Friend,” which is almost rendered unwatchable by such technique.

Keegan DeWitt’s hauntingly beautiful violin and keyboard score is reminiscent of certain Moody Blues compositions (specifically, the intro to “Your Wildest Dreams”).  In most films, music is used to tell us how to feel.  Here, it’s used to bring us back to the simple love that highlighted the beginning of Emma’s and Jude’s relationship – all the while eerily accentuating the underlying disease that would render this relationship over practically before it ever begins.

Raul Castillo and Soko play Ben and Samantha, best friends of the lead characters.  Raul contracted the virus before Jude, and his antics display the severity of the disease.  As we watch Raul attack Samantha (under the assumption she is an intruder), we see where Jude’s life is heading.  Jude isn’t at this point yet, but what good does it do for Emma to write down Jude’s home address, complete with instructions for how to find their apartment, if Jude forgets the instructions are in his wallet.  Emma is rightfully scared, and will do anything to save Jude.  Hence her interest in the clinical trial. 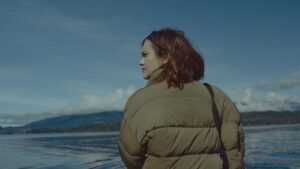 “Little Fish” raises some interesting issues, particularly about memory loss.  In this sense, it brings back memories of Christopher Nolan’s “Memento,” but given the timing of its release, it almost works as a companion piece with Harry Macqueen’s “Supernova,” which is out now.  “Supernova” focuses on early-onset Alzheimer’s Disease, where “Little Fish” is purely science fiction.  But the two hit some of the same chords, particularly pertaining to the loved ones tasked with carrying on once the significant other is beyond help.

In both films, the diseased character knows full well the trajectory his life is taking.  Both films are small, personal stories.  My recommendation is to watch both.  Start with “Little Fish,” as it is based purely on imagination, whereas “Supernova” is rooted in the real-life affliction of dementia.  These are both very good films, which (hopefully) lay the groundwork for Florian Zeller’s forthcoming “The Father,” which stars Anthony Hopkins as a man struggling with Alzheimer’s.