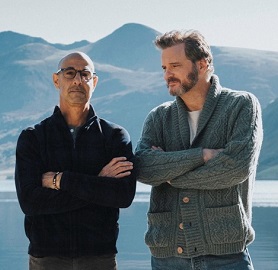 Sam and Tusker have been partners for years.  We meet them at the outset of a vacation to England’s scenic Lake District to meet up with friends and family they haven’t seen in a while.  As Sam and Tusker exchange friendly bickering over the GPS and how to drive their camper, we sense their inherent compatibility.  These two know each other.  Very well.  They know each other’s quirks; they know what makes the other one tick.  They know what buttons to push to get their way.

But something is amiss.  There’s something just a tad “dark” lurking under the surface of the dialogue spoken by these two men.  As director Harry Macqueen’s original screenplay advances, we learn Tusker is the victim of early-onset dementia.  It won’t be long before he doesn’t recognize Sam.  It’s heartbreaking to watch Tusker (veteran American actor Stanley Tucci, performing the best work of his long and storied career) cope with the knowledge that his brain will soon not allow him to connect with his life partner.  It is perhaps more heartbreaking to watch Sam grapple with the awareness that he will soon lose his life partner – in mind only; Sam will be tasked with caring for Tusker’s body.  As Sam, British actor Colin Firth puts forth his best work since “A Single Man” and “The King’s Speech,” each of which is now over a decade old.

Compounding matters is the fact that Tusker is one who has always been in complete control of his life.  He’s a planner, who doesn’t like surprise or change.  That makes his impending journey a more bitter pill to swallow than were the victim the more easygoing Sam.  While “Supernova” shows us only the very early stages of Tusker’s condition, we see signs of the agony to come in simple scenes such as an early one in which Tusker has difficulty sticking his arms in the proper sleeves while putting on a shirt. 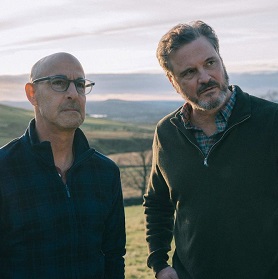 In the film’s best scene, Tusker is unable (either because of his condition or because he’s overcome with emotion) to read to the extended family a single-page prepared speech expressing his love for Sam as the two of them embark on their final journey together.  Instead Sam reads the letter – in first person – as we watch Tusker’s face fill with pride, and then with extreme sadness.  “Supernova” allows Tucci and Firth to put forth some of their best work ever.  As acting goes, this is a tour-de-force that could have turned maudlin, if not for their skill as interpreters of written material.  Their acting chops are on full display here, and it’s a true delight to watch these two veterans of stage and screen.

Not necessarily about dementia

“Supernova” is not a retread of “Still Alice,” in which Julianne Moore won an Oscar for her portrayal of a middle-aged woman’s descent into the depths of Alzheimer’s Disease.  In fact, “Supernova” is really not a film about Alzheimer’s at all.  Tusker’s disease could be cancer, for that matter.  This is a film about two men coming to the realization that their world is about to change.  Soon, nothing will be the same.  It’s despairing to watch, but the relationship between these two men is so affirming that we leave the theatre not sad, but invigorated.

“Supernova” is a small, personal film.  It’s perhaps not the best of the year, but it’s certainly one of the bright spots in this year’s late array of potential award winners.  I suppose what impresses me most (other than the brilliant, understated acting of the two leads) is the fact that Sam and Tusker are, obviously, gay.  And that has nothing to do with the story!  Finally, we have a major release in which the leads are gay, and that actuality is not central to the narrative.  “Supernova” would have been equally as effective were the two leads a man and a woman.  Or two women, for that matter.

This feels like the hurdle we (collectively) crossed in 1973 when Otis Young’s character in “The Last Detail” was black, and didn’t “need” to be.  In other words, his character could have been white, and nothing about the film would have changed.  Contrast the Young character to any role Sidney Poitier played in the 1950s and ‘60s, in which his characters’ blackness was the impetus around which the action of the films revolved.  “The Last Detail” provided a much-needed subtle shift away from the “message” of black motion picture characters to a new normal of their simply appearing in movies regardless of their race.

I believe we’ve at long last reached that stage now in relation to gay characters.  The fact that Sam and Tusker are gay is of no importance to the reality of the narrative.  And that’s where Macqueen’s film hits its proverbial home run.  For that fact alone, “Supernova” ranks as one of my recent favorites.  It’s a quiet, intimate film that strikes many chords.  Dick Pope’s panoramic cinematography is beautiful.  Keaton Henson’s hauntingly simple musical score is delicate and moving, without overpowering.  And the acting is subtle and brilliant.  Kudos to all involved in making “Supernova.”