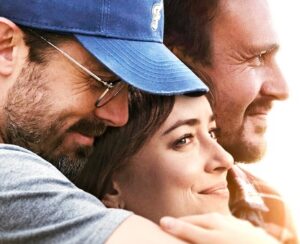 Nicole Teague has cancer.  She is going to die.  She will leave behind her husband Matt and two young daughters – one in middle school and the other in elementary.  As Nicole’s cancer progresses, best friend Dane moves in to help with the girls and with household chores.  This is the premise for Gabriela Cowperthwaite’s new film “Our Friend,” which seems to have the opportunity to veer in one of two directions:  Either a maudlin slog through the deepening stages of cancer, or some heroic television movie-of-the-week fable about how one woman conquers cancer, and the world is all better for it.

Fortunately, “Our Friend” finds a third path.  Brad Ingelsby’s screenplay (adapted from Matt Teague’s autobiographical account) lays bare the harsh realities of a family’s struggle with a deadly disease.  Everything we’ve ever wondered about the repugnance of cancer is here:  When to tell the girls, how to juggle work and family, the extent to which friends and extended family are allowed to help, and so forth.  This is practically an instruction manual on how to cope (and often how not to cope) with cancer.

“Our Friend” is anchored by three very strong performances.  Dakota Johnson makes up for her “Fifty Shades” fling with a courageous turn as Nicole, a former stage actress threading the proverbial needle between preparing her daughters for life without her and maintaining some sense of status quo.  Jason Segel also turns in his best performance as Dane, a man with no real direction in life.  He bounces between jobs and girlfriends so fast it’s hard to keep up.  But that’s exactly the kind who can drop everything, and move in with the Teagues for Nicole’s final months. 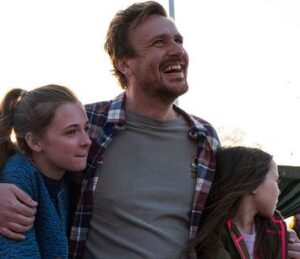 And Casey Affleck proves his Oscar-winning outing in “Manchester by the Sea” was no fluke.  I cannot express how thoroughly mesmerized I was watching Affleck in “Our Friend.”  Several times, we think we know the next words that will emanate from Matt’s mouth.  But more often than not, Affleck doesn’t say a word.  His facial expressions say everything Matt is thinking.  Affleck deserves to be nominated again for his realistic, demanding, and loving portrayal of Matt – a journalist who cannot afford to stop working to take care of Nicole, but whose heart and soul are devoted to his family.  It’s an absorbing and gripping acting achievement, which stands as one of the best of the year.

And Cowperthwaite (known primarily as a documentary filmmaker) succeeds by throwing in subtle touches – such as occasionally interspersing helicopter-eye views of the streets and neighborhoods below.  Initially annoying, these shots seem to preface Nicole’s eventual place in heaven.  There is also a particularly touching scene in which Matt drives past a local playground, and witnesses several young mothers playing with their children.  Again without uttering a word (he is alone in the car after all), Matt is thankful that Nicole had the same opportunity with their daughters, yet he hurts for the upcoming life milestones she will miss.

There’s a lot to like in “Our Friend.”  Unfortunately, the screenplay is almost undone by the aggravating and bothersome habit of skipping back-and-forth in time.  This is a story that begs to be told in a lineal fashion.  And while Matt Teague’s original manuscript may have relied on flashbacks as a journalistic mechanism, their overuse here very nearly ruins an otherwise excellent film.  Don’t bother trying to recall which scenes occur prior to others.  It’s impossible to mentally place the various action in “Our Friend” sequentially.  The overindulgence in flashbacks has sunk many a motion picture in recent years.  But I’ve never seen such a sequential mess as this one.

Now having pointed out the elephant in the room, “Our Friend” does for cancer what “Still Alice” did for Alzheimer’s Disease.  It reveals the difficult reality of a devastating condition and a slow death.  “Our Friend” is a tearjerker, but the tears we cry are real.  This is no sugarcoated story like those Robby Benson used to churn out.  We feel the Teague family pain.  The performances and direction are strong enough to make us better for having joined them in the journey.