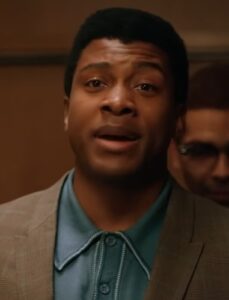 After defeating Sonny Liston for the world heavyweight title in 1964, Muhammed Ali (then known as Cassius Clay) met with his spiritual mentor, Malcolm X (spokesman for the Nation of Islam) in a motel room in Miami – rather than spending the night partying on the town.  Legend has it that Cleveland Browns running back Jim Brown and popular singer Sam Cooke were also present.  Although no one knows what transpired that evening, playwright Kemp Powers penned his thoughts in a 2013 play called “One Night in Miami.”  Now, actress Regina King has adapted that production into a feature length film.  And for a directorial debut, King hits the proverbial ball out of the ballpark.

Unlike Denzel Washington’s 2016 motion picture adaptation of August Wilson’s “Fences,” “One Night in Miami” almost never feels like a filmed stage production.  In fact, King’s film begins with an extended introductory sequence showing each of the four protagonists in less-than-stellar life moments occurring before the night of the 1964 prize fight.

We see Sam Cooke bomb during his first appearance at the Copacabana nightclub in New York.  We see Cassius Clay lose an early fight.  Jim Brown is invited to the mansion of a family friend, only to be told their discussion must be confined to the porch, as black people were not allowed in the house.  And Malcolm X and his wife ponder his future in the Nation of Islam, after a falling-out with the group’s leader.

By the time the four arrive at the motel room, at least a half-hour of screen time has elapsed.  Then once the discussions begin, the monotony of constant dialogue is interjected by outdoor vignettes – Malcolm X calling his wife from a motel payphone, Cooke and Clay driving to a nearby liquor store, and so forth.

But the crux of “One Night in Miami” is the motel-room exchange amongst the four African-American notables – the majority of which is triggered by Malcolm X’s insistence that the others do something to advance the cause of black people with their celebrity status.  His words are particularly acute when he accuses Cooke of pandering to a white audience by, among other examples, never recording a lyrically poignant song like Bob Dylan’s “Blowin’ in the Wind,” or selling one of his songs to an up-and-coming white British rock group known as the Rolling Stones.  Cooke retorts that he is simply singing the songs his audience wants to hear, and that he continues to reap royalties every time a young white girl purchases the Stones song.

Others challenged by Malcolm X

Meanwhile, Clay has stewed over his conversion to Islam, but now has second thoughts once he learns of Malcolm X’s dissatisfaction with the leadership of the Nation of Islam movement.  And Brown has recently embarked on an acting career – chastised by Malcolm X because in his first feature, Brown plays the “token black man in a western.”  The conversations are pointed, direct, and moving – with each character making his case for why he has handled his fame in the manner he has.  The beauty of “One Night in Miami” is that we eavesdrop on a group of influential African-Americans who wrestle with how to handle their positions in society – particularly to black fans.  While none of the issues is “solved” per se, the ensuing discussion is riveting; issues are raised that leave us with plenty to ponder as we leave our local cineplex.

And King’s direction is something to behold.  Not only does she move the action outside the motel room with some regularity, but she frequently uses the mirror in the room to position all four actors in her frame simultaneously.  Kudos to cinematographer Tami Reiker, as well as Kemp Powers for deftly adapting his work to the big screen.  If King is nominated for Best Director, it will be the first nomination for a black female in this category. 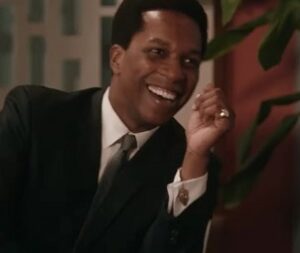 Of the four lead actors, only Leslie Odom Jr. (who played Aaron Burr in “Hamilton,” and has had roles in recent films like “Murder on the Orient Express” and “Harriet”) is a household name.  He plays Cooke with all the boyish charm the role demands.  British actor Kingsley Ben-Adir plays Malcolm X, veteran character actor Aldis Hodge is Jim Brown, and young Canadian actor Eli Goree turns in the best performance as the cocky yet conflicted Cassius Clay.  It’s a wonderful ensemble, and an excellent directorial debut for King.

In a year of important films delayed by the Coronavirus, “One Night in Miami” ranks as one of the year’s finest accomplishments in filmmaking.  Look for this one at this year’s delayed Oscars, currently scheduled for April 25th.