Cassie spends her nights at high-end bars and clubs, pretending to be so drunk she can’t drive herself home.  Inevitably, young, attractive, single, “nice” men will offer to drive her home.  They typically wind up back at the man’s apartment, where he will attempt to force himself on Cassie.  It is at this exact moment when she will fess up to the charade, and force a concession out of them.  It’s a little game she plays, and at the outset of Emerald Fennell’s “Promising Young Woman,” we’re not exactly sure why Cassie does this.  Could it be nothing more than a power trip?  Or was she taken advantage of, and this is her method of righting the wrongs of her past?

As the story unfolds, we learn Cassie’s lifelong best friend took her own life following a gang rape during medical school.  Cassie was so shaken by this episode that she dropped out of med school and now passes her time working in a coffee shop.  She still lives with her parents.  Her life seems stuck in a rut.

Then she meets an old med school buddy named Dr. Ryan Cooper.  By all outward appearances, he really is a nice guy.  He wants to “date” Cassie, rather than use her as a one-night stand.  As the Cassie/Ryan relationship unfolds, “Promising Young Woman” kicks into high gear.  Here, we believe, is where Cassie’s life finally moves out of its holding pattern, and resumes.

Not as it seems

But alas, all is never as it seems in Fennell’s directorial debut.  Cassie still has some grievances; she still has scores to settle.  And her obsession over her past has made her very unstable.  We don’t know how far she’ll go in the name of “payback.”  It is this very uncertainty that draws us into this unique narrative, even though we know it has the potential to destroy what certainly must be the best relationship of Cassie’s young life.

Because of this ambiguity surrounding Cassie’s emotional stability, it’s difficult to compare “Promising Young Woman” to anything I’ve ever seen.  However, I’m going to draw an analogy to Matt Spicer’s 2017 black comedy “Ingrid Goes West,” in which Aubrey Plaza’s character idolizes a social media hound to such an extreme that she kidnaps her dog just so she can return it and become friends.  In that film, the action was always a step ahead of us, because we were uncertain how far Ingrid would go to satisfy her passion for attention.  “Promising Young Woman” features a similar premise in that the lead character’s instability is what draws us in and holds our attention – even though we know the results could be disastrous.

Fennell’s original screenplay is wildly uneven in tone.  The “falling-in-love” sequence between Cassie and Ryan is one of the most joyous, cheerful scenes in recent motion pictures.  But the final act is downright dispiriting.  Still, I applaud Fennell for not playing it safe in her first feature.  I’d rather have a few issues with the cinematic style and be mesmerized by originality than had Fennell played it safe and bored me to death with a plot whose developments I could see coming a mile away.

“Promising Young Woman” may not be the greatest picture of the year, but it’s a damn sight better than most of the drivel Hollywood churns out.  For starters, Carey Mulligan is absolutely spellbinding in the title role.  She threads the proverbial needle between overplaying Cassie’s mental instability vs. interpreting her as too sweet.  Mulligan has turned in some fine supporting performances, including “Shame” and “Inside Llewyn Davis.”  But this is her first important lead role since her Oscar-nominated performance in 2009’s “An Education.”  And she nails it.  She must, as the believability of the entire exercise is dependent upon Mulligan. 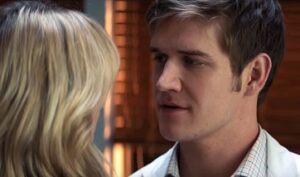 In an interesting casting choice, Dr. Ryan is played by comedian Bo Burnham, whose directorial debut was the outstanding 2018 indie “Eighth Grade,” which I had #2 on my list of the year’s best films.  It was the most honest, forthright display of teen angst ever put to celluloid.  I loved “Eighth Grade,” and I love than Burnham continues to utilize his talents with projects outside the cinematic mainstream.

Unlike the new Tom Hanks picture “News of the World,” “Promising Young Woman” may not be to everyone’s taste.  I get that.  But I also understand that it takes a lot more work to bring an oddball, slightly off-kilter project like “Promising Young Woman” to the national conscience than it does a by-the-numbers film like “News of the World.”  I see a bright future for Emerald Finnell – as a director and a screenwriter.  My only request is that she continue to surprise me with stories that hold my interest and require a little investment on my part.  Ms. Finnell, keep up the good work!