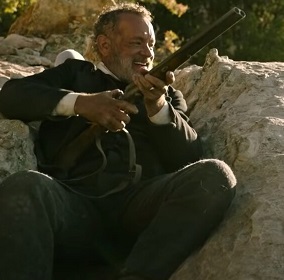 Johanna Leonberger’s parents died when she was an infant.  She was raised by the Kiowa (a Native American tribe of the Great Plains); but now, as a ten-year-old girl, she finds herself orphaned again.  On her way to be reunited with a Leonberger aunt and uncle, her coach driver is ambushed and hanged.  You see, he is a black man, and our story unfolds in post-Civil War Texas – where resentment against the North, and against African-Americans in general, still runs high.

Stranded alone in the woods, young Johanna is discovered by a traveling newsreader named Captain Jefferson Kyle Kidd.  He’s played by the noble and abiding Tom Hanks – the perfect actor to sell Paul Greengrass’ latest film, “News of the World.”  Hanks is so appealing (and naturally comfortable with the girl, even though his character has no children of his own) we just know he’s going to transport the girl across the 400-mile journey to a small village near San Antonio.  Captain Kidd tries to pawn off the expedition on others, but (as we surmise), he eventually spearheads the campaign himself.

Last time Greengrass directed Hanks was in 2013’s “Captain Phillips,” in which Hanks played the captain of a U.S. Naval ship hijacked by Somalian pirates.  That edge-of-your-seat drama could not be more different from “News of the World.”  But, just as in “Captain Phillips,” Hanks could not be more perfect for this role.  His reassuring, good-guy nature is just what Johanna needs, and just what this film needs, to survive.  A rougher, meaner Captain Kidd (think Jeff Bridges or Russell Crowe) would have been too overbearing to be believable.

“News of the World” is supremely entertaining, in the way most Kevin Costner pictures are supremely entertaining.  We know where this yarn is going; it’s entirely predictable.  And it’s a ton of fun watching it unfold.  At first, Captain Kidd and Johanna are unable to communicate.  He speaks English; she speaks Kiowa.  But we assume the two will eventually teach a word or two to the other.  Almost right on target, the two begin to exchange rudimentary conversation.  Likewise, we assume our two protagonists will encounter some evil-minded types along the way.  Again, almost right on target, they do.

That’s not to say “News of the World” isn’t an enjoyable experience at the movies.  It is.  Just don’t expect many surprises.

Again, Hanks is a superb fit for roles like this.  I love to watch Captain Kidd work a crowd.  I don’t know if “traveling newsreader” was an actual profession.  But in an era in which people worked sunup to sundown, and in which many were illiterate, it’s certainly believable.  But Kidd doesn’t simply read the newspaper.  He involves his audience, asking which stories they’d like to hear, and inciting crowd participation for reactions to various political leaders and ideas.  And he does this without being the least bit political himself.   Again, he simply knows how to work a crowd. 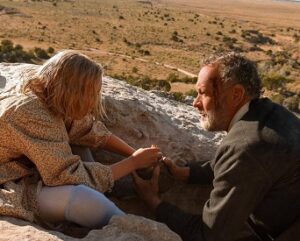 Young German actress Helena Zengel does an excellent job playing against Hanks.  She could certainly have a career as a child actress, and beyond.  Everything about her portrayal is believable – except for the well-trained and accurate fashion in which she handles guns.  I didn’t buy Zengel’s character’s accuracy with a rifle any more than I accepted Kim Darby’s firearm prowess in “True Grit.”

I was also bothered by a scene in which some locals hassle Captain Kidd.  Again, I fully expected their journey to proceed with a certain amount of tumult and danger.  But these locals profess their hatred of Blacks, Mexicans, and Native Americans in such a manner as to give their inclusion in the screenplay a sense that a comparison is being drawn between today’s racism and that which we are watching on screen.  While it’s certainly true that many believed in white supremacy in post-war Texas, it seems heavy-handed to include such references here.  Otherwise, the Greengrass and Luke Davies screenplay is fine.  It is adapted from Paulette Jiles’ 2016 novel “News of the World.”

Is ”News of the World” the best film of the year?  Of course not.  But it is supremely enjoyable, and one that should draw a large audience.  And, much as with Jimmy Stewart in an earlier time, it’s just hard not to like Tom Hanks.