Hollywood has given us a dearth of “serious” science fiction films lately.  And by “serious,” I mean unlike plot-driven good-guys-vs-bad-guys “Star Wars” Saturday-morning matinee fare.  “The Martian,” “Interstellar,” “Arrival,” “Ad Astra,” and others have stretched our imaginations, and caused us to think about meaningful, global issues through the lens of the sci-fi genre.  The best of these recent futuristic features was Alfonso Cuaron’s 2013 drama “Gravity,” in which Sandra Bullock turns in the best performance of her career as an astronaut stranded in space.  She’s essentially the only actor on screen the entire picture, save for a few appearances by a fellow astronaut played by George Clooney.

Now Clooney has opted to put to celluloid an adaptation of Lily Brooks-Dalton’s 2016 novel “Good Morning, Midnight.”  Changing the title to the much less memorable “The Midnight Sky,” Clooney’s film can’t help but garner comparison to the far superior “Gravity” – not only because of his involvement in both projects, but because of the similar tone and theme.

In “The Midnight Sky,” we simultaneously follow two narrative strands – one involving the sole survivor of an unnamed global catastrophe, and the other concerning a space mission’s pending return to earth.  Unaware of conditions on earth (and unable to make contact with NASA or anyone else on the planet), the spaceship crew finally reaches a lone voice informing them of his, and the planet’s, fate.  His name is Augustine (Clooney), a solitary scientist holed up in the Arctic circle, with an abandoned six- or seven-year-old girl who is unable (or unwilling) to speak.  Her presence in this film is never explained, nor is her backstory ever developed.  She would appear to exist merely to allow Augustine to share his thoughts out loud – as though we might be unable to follow his speculations without his verbalizing them. 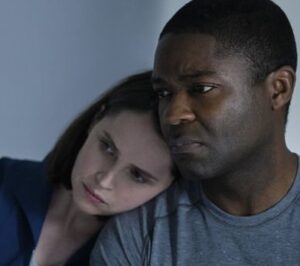 The crew is commandeered by Tom and his pregnant wife Sully.  They are played by the very capable David Oyelowo and Felicity Jones – who feel somewhat wasted in their roles, as they are given so very little to do, save for executing what should be a harrowing spacewalk to perform necessary repairs to the spacecraft.  But much as with any of “The Midnight Sky,” we never believe they are in any real danger.  Blame Clooney’s direction here.  This film looks great.  But it is hollow; devoid of any real substance.

Cinematographer Martin Ruhe and Clooney have constructed an outer space that rivals that of other recent sci-fi efforts – coming close to matching that of “Gravity.”  In fact, I wrote in 2013 that “Gravity” was the only film I had ever seen in which the 3D was not used so much as a gimmick as it was to enhance the progression of the story.  “The Midnight Sky” is another outer space story which might have benefited from the use of 3D.  This film is beautiful to look at.  But so is da Vinci’s painting “The Last Supper.”  So is the Grand Canyon.  So is my wife, in my opinion.  But motion pictures require something more:  A story and characters we care about would be a good start.

But again, not only do we never believe any of these characters is ever in danger, but even the harrowing moments, such as a thin ice floe cracking underneath Clooney and the girl, do not seem dangerous.  When a man falls beneath the ice into frigid water, and we’re not on the edge of our seats, something’s wrong.  Blame screenwriter Mark L. Smith and Clooney for presenting us with characters and situations so detached we find it difficult to relate to them, much less care about their fates.

Furthermore, not only do we never learn the predicament of the young girl, we never learn what calamity has befallen the earth.  What happened to its inhabitants?  Why is Clooney’s character the only remaining adult?  Why can he survive (albeit barely) in the Arctic Circle, while the remainder of the planet is uninhabitable?  At the outset of “The Midnight Sky,” my assumption was that these questions would be answered in due time – much as the fate of the lunar mission in Stanley Kubrick’s “2001: A Space Odyssey” is eventually explained.  Instead, the one item of interest in this entire effort – the one detail which might cause us to care – is left dangling, never to be addressed.  Talk about a missed opportunity.  Perhaps Brooks-Dalton’s novel doesn’t address the tragedy which has befallen earth.  As a filmmaker, this would cause me to question whether to bring this story to the big screen in the first place.

“The Midnight Sky” is a visual work of art.  But its substance is hollow – devoid of any reason to hold our interest, or characters about whom we should care.  And while this film has nothing to do with “Gravity,” the mere fact that Clooney is a part of both projects will invite the inevitable comparison.  While “Gravity” is one of the best films of the twenty-teens, “The Midnight Sky” will be forgotten by Christmas.