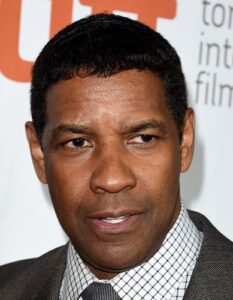 In 2016, Denzel Washington produced, directed, and starred in “Fences,” a motion picture adaptation of August Wilson’s 1985 play of the same name.  Washington starred with Viola Davis, who won a well-deserved Best Supporting Actress Oscar.  While the performances were top-notch, I found the film rose only to the level of a filmed stage presentation.  In other words, I felt like I was watching a filmed play.  All the action took place in either the back yard or the living room.  I may as well have attended a local staged production of “Fences.”

Now Washington has brought another Wilson play to the big screen – 1982’s “Ma Rainey’s Black Bottom,” a fictional account of a 1927 Chicago recording session of the real blues singer Ma Rainey and her band.  This time George C. Wolfe handles the direction, and Washington does not star in the film.  The result is something superior to “Fences,” in that, while the majority of the dialogue takes place in the dank, dark recording studio, enough of the film transpires outdoors in the surrounding neighborhood that it doesn’t feel as though we were picked up and plopped down in a theatre hall.  In fact, when Rainey’s car is struck by another motorist, the scene is played outside on a sunny street.  In the theatrical version, the off-screen accident is merely talked about by the characters on the stage. 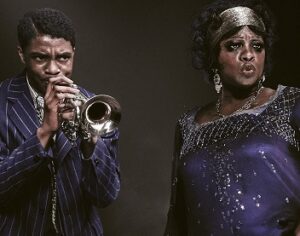 Known as the “Mother of the Blues,” Ma Rainey is the only real character in a film which has more to do with the black experience than it does music.  Extremely popular in the South, Rainey brings her four-piece band to Chicago to cut an album at a small studio owned and operated by two white men named Irvin and Sturdyvant – long-time acquaintances of Rainey, whose sole purpose for inviting her is to sell records.  Rainey, again brilliantly played by Viola Davis, never misses an opportunity to tell her bandmates that Irvin and Sturdyvant could care less about her as a person.  All they cherish is her voice – that which will sell records and earn them a living.

Rainey doesn’t have to tell this to Irvin and Sturdyvant.  Instead she plays her hand to the hilt – stopping the session so she can be brought a Coke, even if that means one of the white men must run down to the corner drug store to buy it for her.  She insists her nephew Sylvester must record the spoken intro to her song “Black Bottom,” even though he has a definitive stutter, and requires multiple takes to adequately recite his three lines.  She plays the white men because she can.  When the session is over, she knows she will return to her status as beneath that of any white executive.  She also knows that she will have no recourse should a white singer decide to record any of her songs.

Ma Rainey’s bandmates – Toledo, Cutler, and Slow Drag – understand the predicament of the Black American in the 1920s.  They’ve been around.  They get it.  Enter newcomer Levee – a hotshot trumpeter with plans of fronting his own band – and putting the White Man in his place.  The other band members have seen his type before – young and ambitious, but without much horse sense.  They know poor Levee will be taken down a rung or two as he climbs the proverbial ladder of success.  But they don’t count on Levee’s explosive personality backfiring on him so soon.  His ruthless, arrogant attitude becomes his greatest stumbling block in a culmination scene almost as frightening as it is shocking.

As we might expect, the Wilson dialogue is wordy.  And, unlike in real life, his characters are wont to break into long soliloquies, which command the attention of others in the room.  Levee has a couple of these – the greater of which questions the existence of God.  How can there possibly be a God, considering the plight of the Black American?  Considering the Black Lives Matter movement of this past summer, “Ma Rainey’s Black Bottom” could not hit theatres at a more appropriate time. 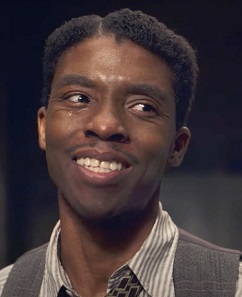 But there’s another layer to this film, in that the character of Levee is the last to be portrayed by the great Chadwick Boseman, who died of cancer this past August at the tender age of 43.  The fact that Boseman knew “Ma Rainey” would be his last performance may have caused him to put everything out there, as the saying goes.  But the parallel between actor and character is jarring.  When Levee questions the presence of God, are we not really watching Boseman question how a God could let him perish at such a young age – with another potentially four decades of great roles ahead of him, that he will never have the chance to play?  As critics, my colleagues and I have been taught to separate actor from character.  During Viet Nam, we critiqued Jane Fonda’s performances – not her stance against the war.  But that separation is perhaps more difficult in this film than in any other I have ever reviewed.  It’s nearly impossible to watch Levee and not see the dying Chadwick Boseman.

Having said that, Boseman has played Jackie Robinson, James Brown, and Thurgood Marshall.  His achievement in “Ma Rainey’s Black Bottom” is the greatest of his career.  He deserves a posthumous Oscar for absolutely nailing this part.  Again, Davis is exceptional, and in a supporting role, Glynn Turman stands out as pianist Toledo.  On the other hand, Taylour Paige overdoes the sexy, sultry bit as Ma’s daughter Dussie Mae.  It’s not a stretch to imagine that Levee believes he can have any girl he wants; there’s no need for Dussie Mae to plant that seed so willingly during the proceedings of the recording session.

There’s a lot to like about “Ma Rainey’s Black Bottom.”  It’s one of the year’s finest accomplishments – in terms of acting, cinematography (kudos to director Wolfe and cinematographer Tobias A. Schliessler), and social criticism.  And social criticism may be “Ma Rainey’s” lasting legacy.  In a time when “systemic racism” is being challenged all over America, “Ma Rainey’s Black Bottom” shows us just how far we’ve come.  While notable recent films like “The Hate You Give” and BlacKkKlansman” identify how far we have to go, “Ma Rainey” illuminates the progress made by black recording artists during the past century.  And that’s no small achievement.  Black singers and rappers today control their own careers and destinies – a far cry from the pre-rock-era days during which black talent was used to further the careers of white musicians and executives.

One of this year’s finest

At barely 90 minutes, “Ma Rainey” is a surprisingly short film.  But when the closing credits role, we realize there’s nothing more to say; no more point to be made.  This is a concise, moving story which hits as hard in 2020 as it would have in 1927.  If Black America can use this film (and Boseman’s all-too-short career) to constructively push for expanded equality, “Ma Rainey’s Black Bottom” will have accomplished its goal.