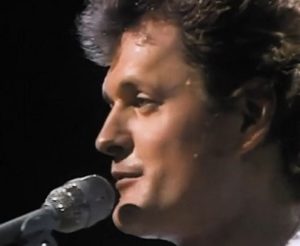 Singer-songwriter Harry Chapin is best known for his Grammy-nominated 1974 hit “Cat’s in the Cradle.”  Unfortunately, Chapin was killed in an automobile accident in 1981 at the age of 38.  Consequently, Chapin’s career has been somewhat relegated to a mere footnote in the annals of folk rock.  Now, we are able to revisit the short but engrossing career of the political activist, philanthropist, and musician, thanks to Rick Korn’s new documentary, “Harry Chapin: When in Doubt, Do Something.”

The film begins with the boilerplate return to his childhood – in this case, growing up as one of six brothers and step-brothers, all of whom were artistic and/or musical.  (Chapin’s father was a noted jazz percussionist.)  Chapin and his brothers formed a New York vocal band in the 1960s, but Chapin was essentially kicked out of the group when he briefly joined the Air Force and had to be replaced.  Upon his return, he began a solo career, first as the warm-up act for his brothers, then forming his own band.

Chapin had a knack for writing story songs, and his popularity began to grow around New York music circles.  Eventually, he and his bandmates were caught in a contract bidding war between Columbia and Elektra.  Chapin hit the ground running in 1972 with his song “Taxi.”  But it was in late 1974 when he burst into popularity with the classic “Cat’s in the Cradle.”  While “When in Doubt, Do Something” features the requisite talking-head interviews (some of which are quite compelling), its most endearing sequence features a string of pop-culture “Cat’s in the Cradle” references – even including nods from “The Simpsons” and “Two and Half Men.”  The song (about a father’s neglect of his young son) obviously struck a chord within the masses that continues to resonate today.

What did I learn?

As with any such documentary, we must ask, “What did I learn?”  In last year’s hard-hitting “Hesburgh,” most of us were introduced to a man (former Notre Dame President Father Theodore Hesburgh) whose name might have resonated, but about whom we collectively knew almost nothing.  Conversely, “Linda Ronstadt: The Sound of My Voice” highlighted a very popular and beloved singer, but shed almost no new light on her life or career.  “Harry Chapin: When in Doubt, Do Something” falls into the former category.  While he may not associate with us the way Ronstadt does, we at least learn something about this musical prodigy.

Most of us (even those of us who lived through the Chapin years) are unaware of his allegiance to ending world hunger.  Now granted, many artists have pet causes – think John Mellencamp and his advocacy for the small family farmer – but world hunger?  Isn’t its termination nothing more than a pipedream?  Some may think so, but Chapin found the goal within reach.  After all, food and hunger experts have often iterated that the world produces enough food to feed all its inhabitants – if only it could be distributed in a more cogent manner.

Some might argue that Chapin bit off more than he could chew, but not Chapin.  With the help of former Vermont Senator Patrick Leahy, Chapin was granted audience with President Carter.  And even after securing Carter’s approval of his plan, continued to badger Carter with his passion.  When Leahy asked why Chapin refused to take “yes” for an answer, he remarked that he wanted more than Carter’s approval – he wanted the president’s passion to equal his.

An epilogue following Chapin’s death shows the lasting effects of his efforts in Quincy Jones’ 1985 recording of “We Are the World” and the 1985 Live Aid concert, both of which raised millions to combat world hunger.  It’s not often documentaries of the deceased progress beyond the death of the protagonist.  “Harry Chapin: When in Doubt, Do Something” practically necessitates this postscript.

The political irony also shines through when one of the talking heads remarks that the new Reagan Administration had no interest in continuing Chapin’s efforts to battle world hunger.  A few minutes later, we see Reagan holding hands with others during the 1986 Hands Across America event to combat hunger in America.

While the talking heads eventually become tiresome in “When in Doubt, Do Something,” Billy Joel provides a constant stream of alluring remarks – particularly when he cherishes Chapin’s recognition of his “Piano Man” during a concert in which the younger Joel warmed up for Chapin.  Bruce Springsteen also provides some insight into the energy which made Chapin tick, and Chapin’s bandmates, widow, and children serve enlightening commentary.

“Harry Chapin: When in Doubt, Do Something” is certainly not the greatest in the recent slew of documentaries, but it does shed some light on a forgotten musical artist.  And again, perhaps most importantly, we learn something.  Hats off to first-time director Rick Korn.  Maybe next time, he’ll lose some of the talking heads and let us hear more of the uninterrupted music.