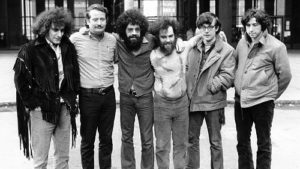 Aaron  Sorkin has made a career of writing political drama, such as the hit television series “The West Wing.”   His first directorial effort was the outstanding “Molly’s Game,” which made my Top Ten List for 2017.  His latest is “The Trial of the Chicago 7,” which highlights the trial of the instigators of the Chicago riots of 1968 which coincided with the Democratic National Convention.

Why re-tell this story now?

The trial of the protest ringleaders is certainly an alluring chapter in American history, but why re-tell it now?  It’s obvious, as Sorkin’s original screenplay wears on, that this story is offered as an indictment of past police overreach, to coincide with that of today’s Black Lives Matter movement – although only one of the Chicago 7 was African-American. 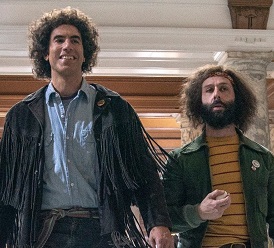 Still, it is a beguiling tale, and one that is lost from the memory of most living Americans.  To review, the masterminds of three separate left-wing protest groups were corralled into one trial in Chicago, which began at the dawn of the Nixon administration in 1969.  They included button-down suit-and-tie political activists Tom Hayden and Rennie Davis, anti-establishment “Yippie” leaders Abbie Hoffman and Jerry Rubin, middle-aged pacifist Dave Dellinger, and Black Panther leader Bobby Seale.

The trial notoriously devolved into political theatre, with Hoffman and Rubin frequently objecting (even though they were not attorneys), and Seale frequently speaking out of turn to incite his fellow Panther followers present at the trial.  While this declension of the trial is well-noted, those of us not intrinsically involved in the anti-Vietnam movement of the 1960s will feel the histrionics of most of the Seven serve only to make a mockery of the sanctity of the law.  As a juror – even one sympathetic to the cause – it would have been difficult to acquit those whose sole purpose would appear to be insulting the very system put in place to save them.

As Hayden, the smartest and most polished of the lot, British actor Eddie Redmayne does an excellent job of straddling his desire for the anti-war movement to succeed against giving credence to those whose primary desire is to ridicule the legal system upon which American government was founded.

Still, “The Trial of the Chicago 7” eventually makes us side with the defendants, as additional evidence against the police and government authorities continued to build.  We may not always agree with their tactics, but their message is spot-on.

Redmayne is the glue which holds this expansive and notorious cast together.  Sacha Baron Cohen is stellar in an essentially non-comedic role as Hoffman.  Jeremy Strong plays Rubin, and Yahya Abdul-Mateen II is Seale.  British actor Mark Rylance is almost unrecognizable is lead defense attorney William Kunstler, and the venerable Michael Keaton turns in an important cameo as Johnson Administration Attorney General Ramsey Clark.  But the potentially award-winning performance is submitted by longtime character actor Frank Langella, who offers perhaps the greatest performance of his entire career as Judge Julius Hoffman, a strict law-and-order type who quickly allows the trial to devolve into farce, by his lack of ability to relate to the various factions of political dramatics at play.  In this strange year of Covid-19, Langella deserves, at the very least, consideration for Best Supporting Actor for a job very well done.

No reason to neglect

As a film, “The Trial of the Chicago 7” may be written off because of its blatant pandering to the anti-police and anti-authority movement of 2020.  But there’s no reason to neglect its impact at telling an important chapter in American history.  And regardless of the severity of today’s protest movement, this isn’t Vietnam – an era in which each day brought hundreds of names of newly-killed American servicemen.  In this sense, equating the two time periods is futile.  For as horrendous as some of the notorious police killings and National Guard riot reactions have been this year, there is no comparison to 1969.